Wipro Q1 preview: Will this tech titan log profit like Infosys, TCS? Find out what you should do with stock 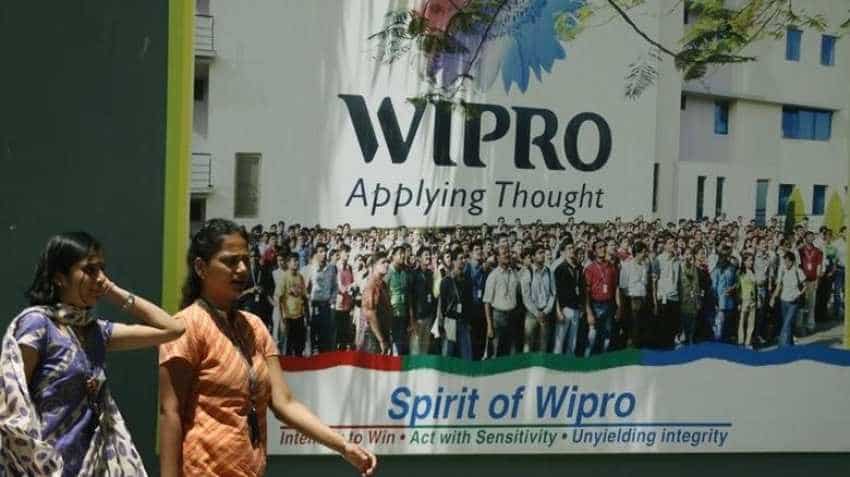 Another IT major is set to announce its financial performance for June 2019 (Q1FY20) quarter anytime on Wednesday. Photo: Reuters
Written By: ZeeBiz WebTeam
Edited By: Harish Dugh
RELATED NEWS

Another IT major is set to announce its financial performance for June 2019 (Q1FY20) quarter anytime on Wednesday. This would be Wipro, which will be presenting its financial audit report. Wipro’s peers like Infosys and Tata Consultancy Services (TCS) have already announced their results and recorded a rise on yearly basis in their net profit in the latest quarter. Wipro would be keenly watched now about whether it too can show the same magic. Also, revenue guidance, BFSI performances  are some important pointers that would be eyed. Investors have already showed their cautious sentiment on Wipro’s share, as it was trading at Rs 260.90 per piece, slightly up by 0.33% at around 1223 hours today. In the early hours, the stock had touched an intraday high and low of Rs 262.90 per piece and Rs 258.25 per piece respectively.

Meanwhile, experts at Emkay Research stated in its note that expectations are for a flat CC growth QoQ for Wipro after normalizing for divested businesses, and a 50bps currency headwind, leading to a USD growth of -0.5%. Margins should decline ~70bps QoQ on INR appreciation, 1-month wage hikes and visa costs, offset in part by improved operational efficiencies post business divestments. Net profit should decline ~9% QoQ on business divestment, slow growth and margin decline in Q1FY20.

Further, according to ICICI Securities, global IT services constant currency revenues could de-grow 0.1% QoQ mainly led by completion of some large projects and slower than expected ramp up in certain projects. This coupled with 0.4% cross currency headwind will lead to 0.5% QoQ decline in US$ revenues of IT services segment. In rupee terms, IT revenues could decline 1.6% to Rs 14,358 crore. Global IT services EBIT margins on an adjusted basis may dip 130 bps QoQ to 17.4% due to one month wage hike impact and currency headwind. Investor interest: Q2FY20E guidance, order pipeline, margin outlook.

Also, Edelweiss Securities in their note mentioned that, they expect  Wipro to deliver no cc growth; 22bps of currency headwinds imply a revenue decline. Adjusted EBITDA margins expected to dip by 90 bps owing to wage hikes and a strong rupee, which should be marginally offset by Wipro's premium pricing and operational efficiencies. Demand outlook in E&U commentary on large deal wins are key monitorables.

During previous quarter, Wipro  has given a guidance of (-1)-1% QoQ revenue growth for Q1FY20E. But in Q1FY20, expert at Centrum in their preview note said, “ We expect Wipro to deliver 0.6% QoQ Constant currency revenue growth for the quarter, which would be within its guidance band. Cross currency movement would be a headwind of 60bps. Hence, we expect Wipro’s reported USD revenues to remain flat QoQ. Wipro has shown an improved performance in select verticals (BFSI, Consumer). Top clients have also been showing steady performance. Consistency in performance would be keenly watched for sustainable re-rating. We expect IT Services EBIT margin at 18.4%, down 80bps QoQ (Wipro gave wage hikes effective June and hence has one-month impact of wage hikes). Our EPS estimates are Rs17/18.8/sh for FY20E/FY21E, respectively.”

Among major things to watch out for would be  1) guidance for Q2FY20 (our expectations: 2%-4% QoQ CC growth); 2) any further announcement on right-sizing, viz., business hive-offs; and 3) outlook on spending in slow growing Manufacturing, Healthcare and European Financial services verticals, as per Emkay’s note.

On the other hand, Infosys posted a rise of 5.3% in net profit at Rs 3,802 crore in Q1FY20 compared to Rs 3,612 crore a year ago in the same period. Meanwhile, the company's revenue grew by 14% in Indian rupees, 10.6% in USD on yearly basis while constant-currency revenue increased by 12.4% in the quarter.

What should you do with Wipro stock?

According to Centrum’s note, Wipro trades at 14x FY21E EPS. Wipro is showing steady traction in the BFSI/Consumer verticals as well as select top accounts. The street would watch for consistency in execution. Even post the completion of buyback, Wipro would still have net cash of Rs175bn on balance sheet.