The US president Donald Trump ordered a review of the US visa programme for bringing high-skilled foreign workers into the country which is likely to have impact on businesses of Indian IT firms. 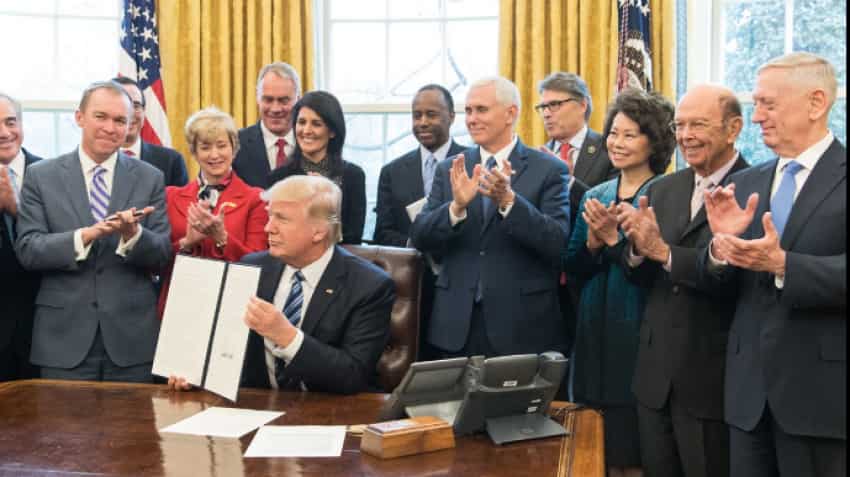 The US president Donald Trump on Wednesday ordered a review of the US visa programme for bringing high-skilled foreign workers into the country. Image Source: Donald Trump/Twitter
Written By: ZeeBiz WebTeam
RELATED NEWS

Infosys to ramp up local hiring in US amid visa concerns

1. US president Donald Trump ordered a review of the US visa programme for bringing high-skilled foreign workers into the country

2. The US government presently uses a lottery system to award 65,000 visas every year

3. Trump administration has accused IT companies of paying lower wages than that set by the country's Department of Labour

The recent announcement of the US president Donald Trump ordering a review of H-1B visa programme that permits bringing high-skilled foreign workers into the country is likely to increase costs and hurt businesses of Indian IT services, according to experts.

Trump on Tuesday ordered a review of the US visa programme for bringing high-skilled foreign workers into the country, putting technology firms and the outsourcing companies that serve them on notice that possible changes may be ahead, Reuters reported on Wednesday.

According to the news report, the order was vague on many front and did not change existing rules, but one objective, said Trump aides, is to modify or replace the current lottery for H-1B visas with a merit-based system that would restrict the visas to highly skilled workers.

Trump announced the order and made remarks at a visit to the headquarters of Snap-On Inc, tool maker in Wisconsin.

The H-1B visas are the most sought after work visas by the Indian nationals and it's the largest group of H-1B recipients annually.

As per the Reuters report, the H-1B visas are intended for foreign nationals in "speciality" occupations that generally require higher education, which according to the US Citizenship and Immigration Services (USCIS) includes, but is not limited to, scientists, engineers or computer programmers.

Presently, the US government uses a lottery to award 65,000 visas every year and randomly distributes another 20,000 to graduate student workers.

Trump's administration has targeted Indian IT firms like Tata Consultancy Services (TCS), Infosys and the US-based Cognizant that follows the offshore model for the visa programme, Business Standard reported on Wednesday.

The US administration has accused these IT companies of paying lower wages than that set by the country's Department of Labour.

According to the Business Standard news report, the US officials claimed that only 5% of the H-1B visa holders in 2015 earned higher wages set by the Department of Labour, while four out of five workers were paid less than the median age.

The Whitehouse blog in a press release issued on Wednesday citing Trump said,"H-1B visas are supposed to bring the highest skilled and paid labour to the United States (US), but according to studies, 80% of the approved applications were for the two lowest wage levels allowed."

According to the release, the Trump's executive order calls on the executive branch to fully enforce the laws governing the entry of foreign workers into the US economy, to promote rising wages and more employment.

The recent executive order of Trump is likely to result in increase in costs and slowdown businesses of Indian IT firms, according to experts.

"With the US administration trying to strictly enforce the law for H-1B visas, Indian IT firms will see a tremendous cost pressure. In addition, if the the lottery system is abolished for visa issuance, it will only add to their cost," the Business Standard quoted HfS Research India analyst Pareekh Jain, as saying.

To comply with the US visa norms even Infosys is looking to hire more local engineers which includes replicating the model of recruiting hundreds of freshers from college campuses and training them in its local training schools, the report said.

In March this year, Infosys had decided not apply for H-1B visas for its junior-level employees due to tougher regulations governing the work visas, The Economic Times reported on March 20

"The company is not applying for visas for employees with under four years of experience. We are talking to clients about offshoring more work to India, and the work done by  junior employees can be brought to India,” the report said citing one executive at the company, as saying.

Commenting on complying with the US visa norms, TCS has said that it will tweak its business models in sync with the country's visa rules.

"...We will have to wait and see. And we will definitely tweak our model in order to ensure that we remain compliant (with the visa norms) and at the same time meet customer demands," PTI reported quoting TCS global head and vice president-HR Ajoy Mukherjee, as saying to reporters.

Asserting that TCS has been compliant with visa norms, he said the company will "definitely continue to stay in the US and continue to meet customer requirements" in its largest market.

"Nothing is being proposed that would impact or change the FY18 H-1B lottery that is currently underway. The proposed changes are forward-looking and non-specific. Nasscom member companies support efforts to root out any abuses that may be occurring in the H-1B system," Nasscom said in a press release issued late evening on Tuesday.

The new executive order on immigration norms is likely to impact the US businesses and their efforts to remain competitive on par with other countries.

"Any onerous additional restrictions on the H-1B and L-1 visa systems would hurt thousands of US businesses and their efforts  to be more competitive by hindering access to needed talent," Nasscom said.

According to Business Standard report,  Indian firms over the past few years have reduced dependency on H-1B visas, while US firms such as Accenture, IBM and Google have stepped up hiring engineers from India and send them on the coveted visa. However, there has been no backlash by the US administration on this.

"The executive order is expected to commission the Department of Homeland security to review the current H-1B programme as the US administration wants to only allow highly-skilled foreign nationals who will contribute to the US economy," the report said quoting a global immigration and employment law firm LawQuest  managing partner Poorvi Chothani, as saying.

"The thrust is on the economy and not only on jobs. It is horrible that they are naming some of the large Indian companies against which there is no concrete evidence of abuse," Chothani said.

"But there are instances of several other companies that have abused the system and brought the entire Indian IT sector to this position. There also are instances where some companies have used business visas for their Indian employees to go and work on short term projects or in rotation on larger projects, which is completely illegal," Chothani added.

She said that going forward the US immigration classifications will be more strict and Indian companies should see stringent scrutiny of applications and compliance, from the US government.

This order will, however, not have an impact on the applications filed this month for the current year.

Infosys to ramp up local hiring in US amid visa concerns