IndiGo had earlier stated that the company is planning to become all -neo fleet by 2022. 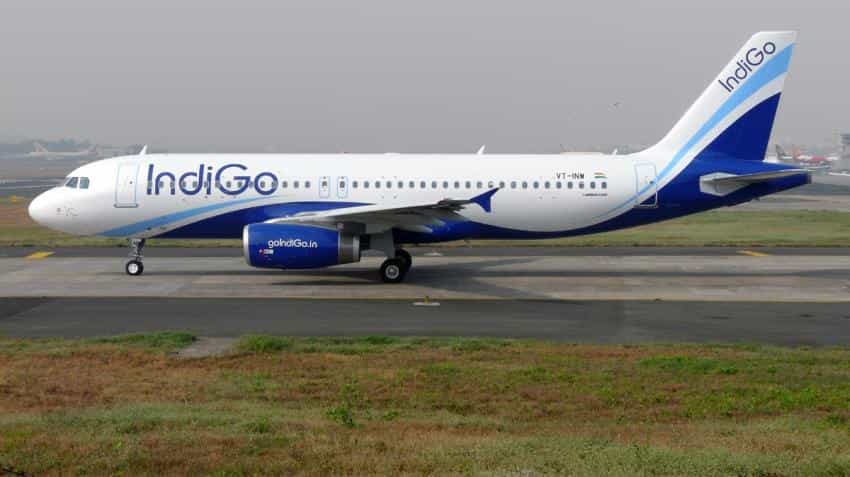 Currently, IndiGo has three A320 neo planes and it has already placed order of 430 such planes. Photo: Wikipedia

InterGlobe Aviation (IndiGo) is set for better operating performance in the second quarter of the current fiscal which will be ending on September 30 on the back of increase in number passengers traveled, an ICICI Securities report said.

Ansuman Deb, Research Analyst, ICICI Securities, said in a note titled ' InterGlobe Aviation- Upgrades to A321neo offer more options', said that even if by factoring a 15% decline in fares y-o-y basis, the growth in top-line will be approximately 20-25%. Comparing it with IndiGo's rival, despite lower base, the domestic passenger growth for the same period (July-August) in case of SpiceJet and Jet Airways was 23% and 5% respectively, which is still less than that of IndiGo's.

"This difference between pax growth numbers between IndiGo and SpiceJet/Jet is due to a relatively lower passenger load factor (PLF) Q2FY16 for IndiGo when it has recorded average 78% PLFs vs 83% registered during July-August 2016. The domestic available seat kilometers (ASK) growth for IndiGo in FY17 YTD has been 28%, in line with our estimates," Deb said.

Will up-gradation to A321 neo give further push to company's numbers?

IndiGo on Wednesday announced that it has decided to updgrade 20 aircraft from its order placed for A320 neos to A321 neos which will be delivered from 2019 onwards.

Mostly chosen for an intermediate range of distance by the international airlines, for Indian airlines the case is different.

With the increase in congestion, the tier-1 airports in India will be facing "increased dearth of landing slots". Thus, the domestic airlines will prefer higher capacity aircrafts for within the country routes as using classic wide body aircraft for short routes will be uneconomical, making A321 variant more suitable.

"Operational commonality between A320 and A321 will ensure benefits of economy in maintenance and pilot training. Apart from higher capacity, the increased range of A321 also brings the option of longer international flights for IndiGo. The maximum flying distance of 7,400 km available with A321 now opens up direct flight possibilities between Delhi and Mumbai to London and in turn most of Europe. As such, A321 neo brings up more options for IndiGo", Deb said.

IndiGo had earlier stated that the company is planning to become all -neo fleet by 2022. Currently, it has three A320 neo planes and it has already placed order of 430 such planes.

Manufactured by European company Airbus, A320neo (New Engine Option), is the latest product by the company which started developing in 2010. The company has an orders from over 4500 firms as of April 2016.

The A321 typically accommodates 185 passengers in a two-class configuration (16 in business class and 169 in economy) – while offering unbeatable economics in high-density seating (with up to 220 passengers) for charter and low-cost operators, Airbus said on its website.

From 2018, an optimised use of cabin space, increased exit limits and a new cabin door configuration will enable new standard capacities for the A321neo (new engine option) of 206 in a two-class configuration and 240 passengers in high-density, the company said.