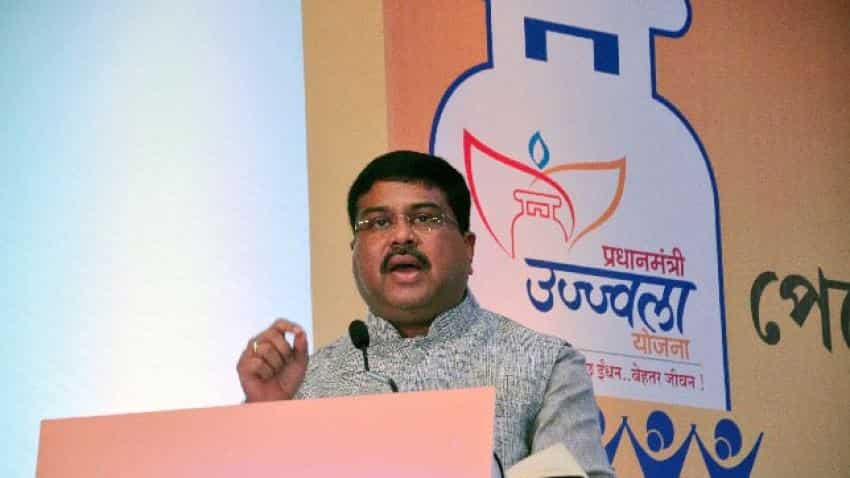 Petroleum Minister Dharmendra Pradhan addresses a meeting of the District Nodal Officers of Eastern and North-Eastern states for organising the 'LPG Distribution Melas', in Kolkata on July 30, 2016. Image Source: IANS/PIB
Written By: IANS

Following submission of the Justice A P Shah committee report on the gas migration dispute between state-run ONGC and private major Reliance Industries Ltd (RIL), Petroleum Minister Dharmendra Pradhan said on Wednesday that his ministry would take "appropriate action" in the matter by end-September.

"The report has confirmed gas migration from ONGC's block to Reliance Industries' block. We will now study the report in detail and then take appropriate action before September 30," Pradhan told reporters in New Delhi. "We need more time to study the report," he added.

"I have submitted a comprehensive report, which covers all the terms of reference and also suggests a future course of action," said Justice Shah, a former judge of the Delhi High Court.

The government had earlier extended, by three months, the tenure of the single-member Shah Committee examining the dispute over natural gas migrating from blocks of the Oil and Natural Gas Corporation (ONGC) in KG basin to neighbouring fields of RIL.

The committee had been asked to submit its report by July 31 on acts of "omission and commission" in the matter, and on compensation payable to ONGC.

Since RIL and its consortium partner Niko Resources of Canada submitted their response together with voluminous data only on February 19, the committee required more time to study these.

The government had constituted a committee last December under Law Commission Chairman Shah to recommend compensation to ONGC to protect the government interest, following the American consultant DeGolyer and MacNaughton's (D&M) report on natural gas from ONGC's Bay of Bengal block migrating to adjoining fields of RIL.

The D&M report says 11.122 billion cubic meters (bcm) of ONGC gas has migrated from Godavari Producing Mining Lease PML and KG-DWN-98/2 (KG-D5) in Krishna Godavari basin to Dhirubhai-1 and 3 (D1 & D3) field located in the KG-DWN-98/3 (KG-D6) block of RIL, as the reservoirs in question are connected.

At gas price of $4.2 per million British thermal unit, the volume of gas belonging to ONGC which RIL has produced comes out to worth $1.7 billion (Rs 11,055 crore).

In October, RIL had said it has "scrupulously followed every aspect of the production sharing contract and has confined its petroleum operations within the KG-D6 Block".

It said all its wells were drilled "strictly within the KG-D6 block boundaries, as per the Development Plan approved by the relevant authorities under the production sharing contract  (PSC)".

D&M was jointly appointed by ONGC and RIL to investigate and submit a report on the matter.