Among the companies that have evinced interest in Jet bidding include Etihad Airways, NIIF, Indigo Partners and TPG. 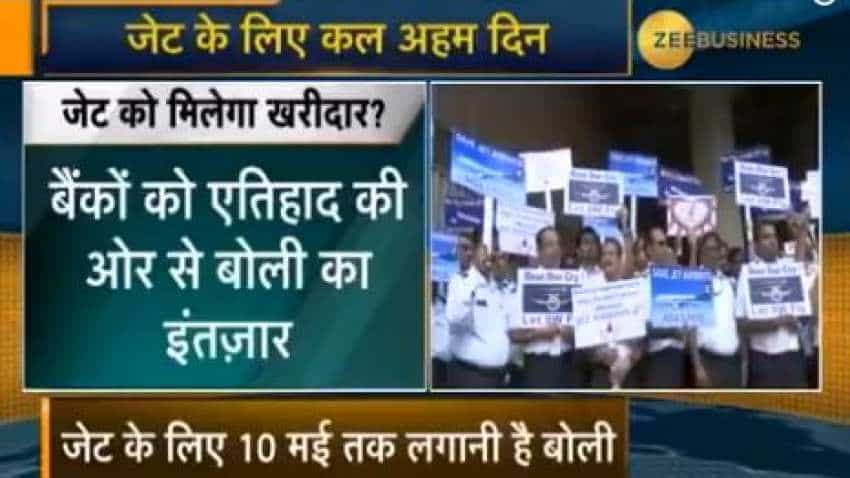 For the grounded Jet Airways, Thursday is said to be very crucial as one of the bidders, Etihad Airways may outline its  bid for the beleaguered airline. With Friday being a holiday in UAE, where Etihad is based, and the last date for finalisation of bidder by lenders being May 10, 2019, tomorrow acquires significance, according to a Zee Business TV report.

The report said that among the companies that have evinced interest in Jet bidding include Etihad Airways, NIIF, Indigo Partners and TPG. Bankers are therefore, are looking at this strong possibility for some forward movement in the case. The fate of the airline as well as its employees is hanging in the balance at the moment.

Another interested party is British-Thai entrepreneur Jason Unsworth who has evinced interest in investing in the grounded Jet Airways. Unsworth, who is the Chief Executive Officer (CEO) at Atmosphere Intercontinental Airlines, a startup he founded four years ago, has reportedly claimed that along with him there are other partners and this includes former Jet Airways chairman Naresh Goyal, Redcliff capital, and Malhar Hospitality. However, Naresh Goyal family has denied Unsworth's claim.

About Jason Unsworth's interest in the bidding process, Zee Business TV reported that bankers have termed it true, but added that on his behalf just one email has arrived and that too yesterday. The email is said to have mentioned $100 crore funding, but it is devoid of any concrete document or concrete plan. Lenders, however, have reportedly stated that Unsworth's proposal would be considered only after May 10, as they don't want to derail the ongoing process.

Notably, ex-chairman of Jet Airways Naresh Goyal on Tuesday claimed that he is ready to infuse Rs 250 crore from his personal funds. He reportedly penned a fresh letter to employees on May 6, just a day after the 26th anniversary of the grounded airline, expressing his gratitude to employees and also thanked them for their constant support.

Goyal added that he is "deeply moved" by the constant efforts of the airline's staff to rescue Jet Airways. He reportedly said, "For Neeta and me, it has been an extremely emotional and difficult period, most particularly about the non-payment of your hard-earned salaries."