The latest car that failed the Global New Car Assessment Programme (NCAP) and be given zero star for driver safety was the Renault Duster. 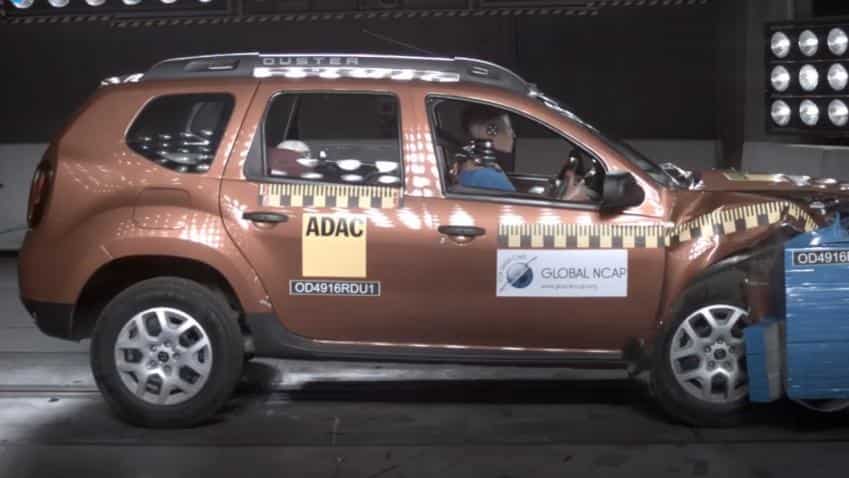 Safety in cars still remains a matter of concern in India. This is not isolated to Indian car makers but international car manufacturers operating in India too seem to cutting corners when it comes to passenger safety in their cars.

The latest car that failed the Global New Car Assessment Programme (NCAP) and be given zero star for driver safety was the Renault Duster. The child safety in the car received a two star rating from Global NCAP.

The same variant of the car with the airbags however managed to get a three star rating out of five stars for driver safety. However, in terms of child safety it also scored a two stars as the variant without airbags. This is poor rating for the car.

However, what was more striking is that Global NCAP in the video mentioned that Renault has the same Duster variant in Latin America and when tested there by Latin NCAP managed to score much higher safety standard ratings than the Indian variant. The Duster with single airbag version tested by Latin NCAP in 2015 scored four stars. It also said that it had larger airbags and the positioning of it helped in bringing about better safety standards.

Renault in a statement said, “Safety is of paramount importance for Renault and all our products meet and exceed the requisite safety standards set by Indian Regulatory Authorities. India is gradually moving towards international safety norms by including more robust safety regulations and the assurance of the Bharat NCAP is a positive step in this direction. As a customer-focused company, Renault fully supports this initiative and we are already future-ready in terms of technology, design and engineering for enhanced safety for all our vehicles. Indian Government has announced that the crash test regulation for the existing cars will come into effect in 2019 and for the new cars in 2017. Renault fully supports this.”

While the car meets safety standards set by the Indian regulatory authorities, it should be noted that the Indian road safety requisites set are one of the worst in the world. As a result many domestically produced cars are frequently made without air bags or three-point seat belts to secure children's car seats. This is as consumers tend to be unwilling to spend additional for safety features.

While airbags are a necessity mandated by the government in many parts of the world, in India it is even considered a luxury. Many companies even advertise this as an added feature and would justify them for charging the customer more. For instance, the recent Ford EcoSport created an ad especially for its latest variant which comes with six airbags to give protection for the people in the rear too.

Renault Duster is not the only car to get poor safety standard ratings. Earlier, in March this year Global NCAP's test Chevrolet Enjoy brought about a zero star rating. Ford Figo Aspire, on the other hand, with two airbags received three stars.