The brand had released two posters with Ranveer Singh one with him wearing the jeans and the other holding a girl. 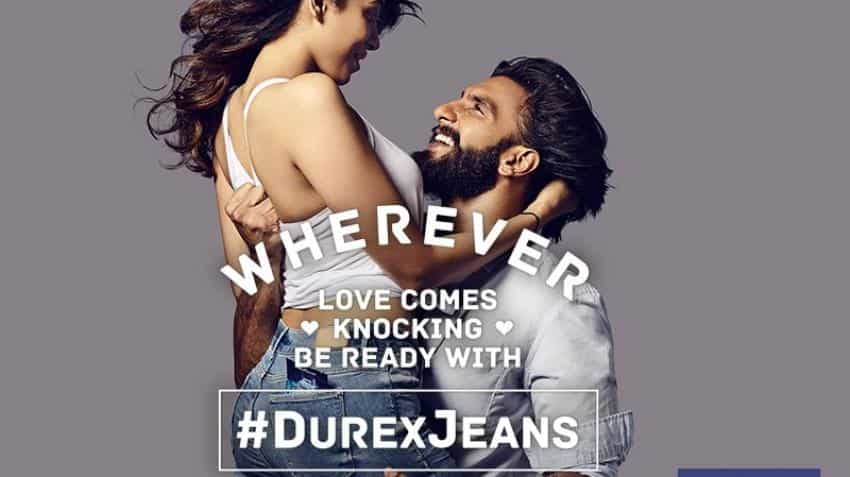 Recently Durex's teaser ad featuring Bollywood actor Ranveer Singh made headlines as it said that the condom brand was looking to come out with a new product jeans by March 25. This sent people on Twitter in a tizzy as everyone came out with their own jokes regarding the move of the brand. Many even created spoofs of people who would buy the Durex jeans.

Durex Jeans will be available in 3 sizes:

Little curious. Will #DurexJeans also come in flavors? Then, I prefer the one with tea tree. I like natural disinfectant stuff.

Taking off a Durex to wear a Durex is gonna be a very confusing experience. #DurexJeans

LOL Durex is launching Jeans ? Buying them will be like... #DurexJeans pic.twitter.com/ZyYfZvybML

The brand had released two posters with Ranveer Singh one with him wearing the jeans and the other holding a girl. It said 'A pair of jeans you can't do without'. Even Ranveer tweeted saying that Durex is launching 'Jeans' and that it designed to fit the passionate.

Check out the new #DurexJeans. Wear it like a boss and be ready for love anywhere. pic.twitter.com/NCUSFmlruO

Durex does a mashup with Jeans and Mashable does the rest. Hi 5 @mashable!https://t.co/nUv3UBlunG

Jeans are so 2016. #DurexJeans comes with a twist. #StayTuned pic.twitter.com/jlZhPeMwHs

The buzz created by this ad was similar to that of the Pan Bahar Masala ad featuring Pierce Brosnan recently.

However, it was Durex that had the last laugh as the teaser managed to get everyone talking about the latest product that they were about to launch.

The brand just revealed that they were coming up with a new condom product which fits easily into a jeans pocket.

#DurexJeans is finally here! And Ranveer looks awesome in it. Check it out. pic.twitter.com/FRjBHgbL4d

The ad campaign and teaser however got everyone talking about the brand and the new product that it was launching.

But people are not wrong to guess that a condom brand could get into some other random product line. Take for instance condom brand KamaSutra which in 2012 launched an energy drink called KS E Drink and even deodrants.

Gautam Singhania, chairman and managing director, Raymond at the launch conference has said that the Energy Drink strengthens this bold and young positioning of the brand and thus becomes a natural extension for the KS brand.

The KamaSutra Energy Drink was positioned as a product to give an energy booster to men to extend their sex drive.

So Durex manufacturing jeans pants are not too far fetched for condom brands.