What makes insurance companies great deal to opt for IPO? 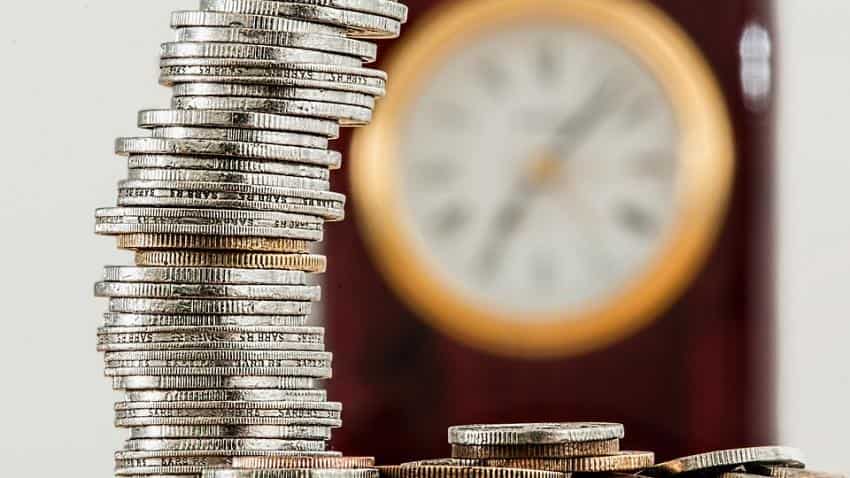 IRDAI has plans to make it compulsory for all insurance companies with about 10-year history to get themselves listed on Indian stock exchanges. Photo: Pixabay

The company's IPO saw subscription of 13.23 crore shares by investors on its first day of opening.  Its IPO will remain open for investors till September 21 this year.

ICICI Prudential has fixed the lower price band of the IPO at Rs 300 per share while the upper price band has been fixed at Rs 334 per share.

ICICI Prudential's  latest IPO is in line with the Insurance Regulatory and Development Authority of India's (IRDAI) norms of making it mandatory for all insurance companies to get listed on the stock exchanges.

The insurance regulator IRDAI has plans to make it compulsory for all insurance companies with about 10-year history to get themselves listed on Indian stock exchanges.

IRDAI in June this year had drafted norms related to listing of Indian insurance companies on the stock exchanges.

The minimum shareholding by promoters or the promoter group shall at times be maintained at 50% of the paid-up equity capital of the insurer, PTI reported in June this year citing the IRDAI draft guidelines for the listed Indian insurance companies.

However, if the present holding of the promoters is below 50%, such would be the minimum holding, it said.

The report further said that ownership limits for all shareholders other than promoters or the promoter group, in a definitive time frame, should be based on categorisation of the shareholders under two broad categories—natural persons (individuals) and legal persons (entities/institutions).

A subsidiary company can invest in a listed insurance company, the report said citing IRDAI guidelines.

The insurance regulator's  guidelines will be a win-win situation for the Indian insurance companies given the fact that the Government of India has hiked the foreign direct investment (FDI) limit in the insurance sector from 26% to 49%, whereby paving the way for more foreign investments into the sector.

According to Assocham report, foreign investment of over Rs 12,000 crore is expected to land in the country as more than dozen foreign companies are planning to raise their stake in private sector insurance joint venture in 2016.

“These investment deliberations are in different stages and foreign funds will flow in during course of the year. The investment push has come as a result of liberalisation of foreign investment ceiling from 26% to 49% last year through the passage of Insurance Laws (Amendment) Bill last year,” Assocham said in a press release on January 25 this year.

Assocham citing IRDAI in its report noted that the total FDI in the country's insurance sector as on March 31, 2015, was about Rs 8,031 crore.

So what makes Indian insurance companies special to get listed on the stock exchanges?  How big is the insurance market in India?

Among the life insurers, Life Insurance Corporation (LIC) is the only public sector life insurance company.

As per India Brand Equity Foundation (IBEF) report released this year, the country's life insurance sector recorded a growth of 22.5% with a new premium income of Rs 138 crore during April 2015 to March 2016  (FY16).

The general insurance sector registered a 12% growth in Gross Direct Premium underwritten in April this year at Rs 10,525 crore, the report said.

IBEF is a trust established by the Department of Commerce of the Ministry of Commerce and Industry under the Government of India.

The country's life insurance sector is the biggest in the world with about 360 million policies, which is expected to increase at a compound annual growth rate (CAGR) of 12 to 15% over the next five years, cited the IBEF in its report.

The insurance industry plans to hike penetration levels to 5% by 2020.

The insurance market in India is expected to increase four-folds in size in the next 10 years from its present size of $60 billion (nearly Rs 3.99 lakh crore), IBEF said.

As far as the general insurance business in the country is concerned, at present it is Rs 78,000 crore premium per annum industry and is growing at a healthy rate of 17%.

Coming to the growth of premium in the country's life insurance sector, the total premium grew at a CAGR of approximately 17% during fiscal 2001 and fiscal 2016, according to IRDAI, CRISIL Research and life insurance industry July 2016 report.

The total claims paid by the life insurance sector grew at a CAGR of 12% between fiscal 2010 and fiscal 2015, the report said. 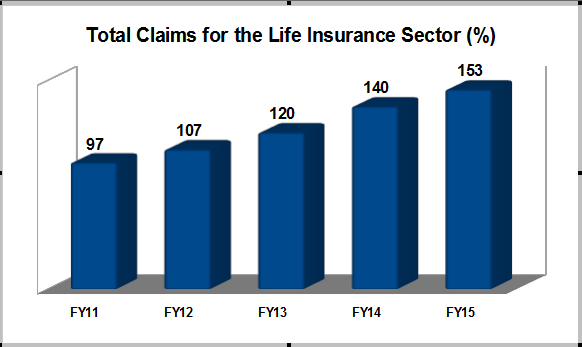 Since the opening up of the sector, private sector companies have gained significant market share. Their share peaked at 57% in fiscal 2009, on an retail weighted received premium (RWRP) basis, it noted. 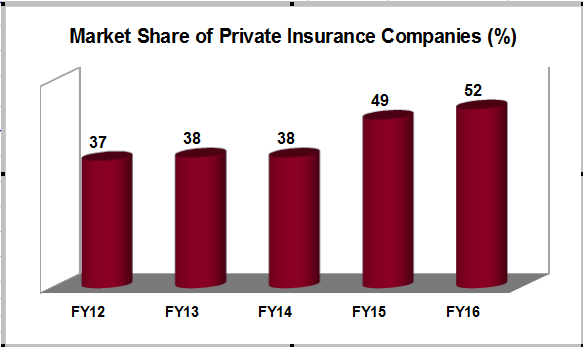 In the last few years, foreign companies have increased their stakes in Indian life insurance companies.

Global has raised funds of around Rs 2,396 crore from leading global investors Bain Capital, GIC and Advent International for a minority stake in the company.

Private sector life insurer's yielded Rs 971.1 crore of re-insurance premium in fiscal 2015 as against Rs 944.8 crore in the year of 2014, the capital markets regulator said.

The well-developed banking sector in India and the nationwide presence of banks have resulted in the increase of bancassurance’s contribution to total insurance business, it added.

Insurance firms are all about IPOs this year