What if Jet Airways stake sale process fails? Lenders might go for this contingency plan

Even as Jet Airway`s lenders are confident of selling their stake in the temporarily grounded airline, they have prepared a contingency plan which includes taking the company to Debt Recovery Tribunal (DRT), sources said. 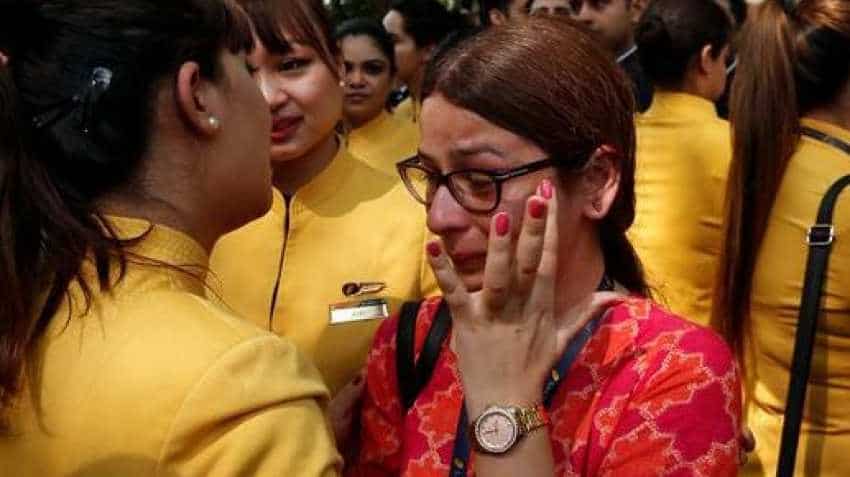 An employee of Jet Airways is consoled by her colleagues during a protest demanding to "save Jet Airways" in New Delhi on April 18, 2019. Image: Reuters
Written By: IANS
RELATED NEWS

Even as Jet Airway`s lenders are confident of selling their stake in the temporarily grounded airline, they have prepared a contingency plan which includes taking the company to Debt Recovery Tribunal (DRT), sources said. Industry insiders told IANS in Mumbai that all efforts are on to see that the stake sale process goes through as planned and is successfully implemented, however, DRT remains as "the last option".  "Going to the DRT remains as a last option. This is the natural progression of recovery, if the stake sale process fails," a senior banking industry source told IANS. "The company owns 16 aircraft and some assets which have already been pledged."

The DRT facilitates the recovery of debt involving banks and other financial institutions with their customers. Approaching the DRT, as a last option is a major departure from the earlier speculation that the airline will be taken to the NCLT (National Company Law Tribunal). The airline owes over Rs 8,000 crore to its lenders.

At present, lenders are keen to complete the stake sale process in a time-bound manner. "We have some serious and interested bidders. We expect to receive the binding bids by May 10. There is no talk of lenders taking a haircut or a minimum threshold level that will be accepted," another source said.

On Jet`s temporarily grounded status and re-allocation of its lucrative time slots at the airport, sources in Delhi said: "These re-allocations are just for three months. This is an interim arrangement. By the end of this re-allocation period, the whole stake sale process would also be completed."

"Even if the slots are re-allocated for three months, the value of the company will not diminish. It will still remain a very attractive buying opportunity."

"Aircraft are being sub-leased through the airline only and the banks are just trying to facilitate the process, so that some funds can be made available to the airline and that under the wet-lease formula, a few pilots and cabin crew are retained."

Last Thursday, briefing the media, Civil Aviation Secretary Pradeep Singh Kharola said that "280 slots in Mumbai and more than 160 slots in Delhi" are left vacant after Jet`s temporarily grounding. These slots will be re-allocated by a committee comprising airport operators, Airport Authority of India and DGCA. In addition, banking insiders rebutted allegations that bankers are reluctant to provide further funding to the airline.

"Banks have tried their best to support the airline, but any interim funding would have met with a legal challenge as the account had turned into an NPA and they would have come back again to ask for more funding as the airline has no fund at all," sources said.

On April 17, around 20,000 employees and passengers were hit hard as Jet Airways announced temporary suspension of all flight services as it failed to secure interim funding from lenders to maintain even bare minimum operations.