We have a clear roadmap for expansion, exploration for growth: Santosh Sharma, Hindustan Copper 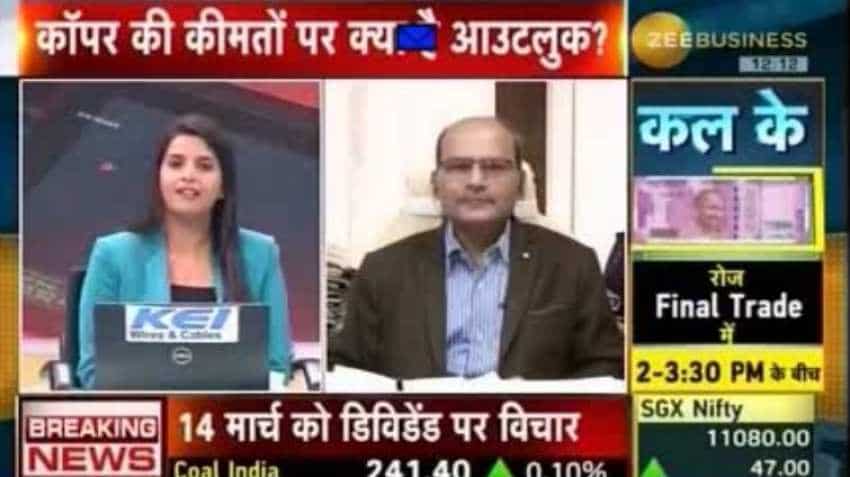 Q: Talk about future plans of the company and kind of growth is expected in production in coming fiscals?
A: If you want to know about the plans for Hindustan Copper, then I would like to draw your attention towards three things and they are:

Thus, I can assure you that the company is progressing on all the three fronts of exploration, expansion as well as the production.

Q: The company has posted good results for the third quarter despite ups and downs in LME price. Let us know about the product mix and the focus area that helped in yielding such results?
A: The company has its focus on selling high-margin products. Currently, the company is engaged in selling three types of products and they are:

1.    Copper Concentrate
2.    Copper Cathode, it is a plate made of copper
3.    Downstream products like the Copper rod or some other products

So, Copper Concentrate was the high-margin product that was sold in the last quarter. You would have noticed that we have achieved growth of 82% in profit after tax (PAT) has in the last nine months. We also brought down our expenditure, increased our turnover.  Apart from this, the output from the expansion projects, currently underway, was obvious and our production has gone up by 15% in the same period.

Hindustan Copper Limited has a unique position in the Indian market. As far as LME is concerned than fluctuations are a part of the market, but the fundamentals are on the side of the price accrues. The supply and demand fundamentals suggest that there will be a pick in demand at all the three levels namely India, China and the World.

You would have noticed that the China government in its forecast has said that its GDP will grow by 6% and I think trade war was also factored in in the forecast. Last year, they grew by 6.5% and this time they have projected a growth of 6%. But the projected fiscal deficit of 2.5% suggests that there will be a rise in the government’s expenditure. Increased expenditure may increase the demand for copper in the country.

When it comes to the Indian market than the demand will be scaled up through various projects like Make in India and Housing for All as well as the infrastructural growth including railway, renewable energy sector and hybrid vehicle segment. These factors will also contribute to increasing the demand at the world level too.
Apart from this, I would also like to pull your attention to the second factor that is related to the closure of one smelter in Zambia, a copper-producing country. The smelter is closed due to some technical issues.
Similarly, two smelters of Codelco, a Chilean company and huge supplier of copper in the international market, are on a long-term shutdown. Closure of these smelters will lead to a decline in copper supply at the world level and that is a reason that there will be no problem related to growth and pricing. I feel, that LME will reach a mark of Rs7000 by the first quarter of 2020.

Q: There was a slowdown in LME pricing but now it is recovering. Hindustan Copper has increased its copper prices by 7% in the recent past. Do you have more headroom for price hike?
A: Definitely. I was just saying that we are working to improve our operating parameters. We will try our best to increase our profitability in the fourth quarter as well.

Q: Then what is your outlook on the margins?
A: It would not be fair to talk about the margins, but I would like to say that we want to take our growth story of 9 months that stands at 82% to 100%.

Q: Hindustan Copper has chalked a strategy to six-fold its output in next 6years and increase its current production capacity to 20 million tonnes per annum (MTPA). Let us know about the current capacity and the strategy that will be adopted to achieve this massive plan?
A: I would like to brief you about our expansion strategy. The company’s current production capacity stands at 3.8 million (38 lakh) tonne and we have a target to take it to 20 million (200 lakh) tonne in next six years. I would also like to apprise you that we had a growth target of taking our capacity to 41 lakh tonnes from 38 lakh tonnes in this fiscal and we are in a direction to achieve it. I am sure that we will be able to achieve the target and we have also designed a blueprint for the next fiscal and we will achieve it too.
Now I will talk about the process/strategy that will be adopted to achieve it. Currently, eight mines are available with us at present and we are doing three things on them, and they are

1.    Expansion of operating mines. Four mines are operational at present.

2.    Closed mines are being reopened. We had two closed mines of which Kendadih Mines, Jharkhand, has been reopened. The second mine, Rakha Mine, Jharkhand, will be opened in next one or two months.

3.    Similarly, we have plans to create new mines in Greenfield and the company has licenses for that purpose. We have also worked in that direction too and have already reopened a mine in Banwas mines, Rajasthan and the second mine will be reopened in Chapri Siddheshwar, Jharkhand. Also, on the frontier of expansion, I will also like to talk about the Malanjkhand Copper Project, which is my flagship project. It is being expanded at a fast pace and I am hopeful that it will start producing for the company by September 2019.
Thus, this is our strategy to ramp up the production and I am sure that we will be able to reach the target of producing 200 lakh tonnes in the next 6 year.

Q: How will you fund the expansion plans? Talk about the cash that is available in the books of the company?
A: We have a CapEx plan of Rs5,000 crore of which at least Rs650 crore has been spent till date. In addition, 50% of the CapEx expenditure will be met by internal accruals, i.e. Rs2,300-2,400 crore will be arranged through internal accruals in the next 5-6years. Rest part of the fund will be collected through equity mobilisation and debts. We will not face any problem in raising the debt as we haven’t leveraged upon the debt-equity ratio of our company yet. We are working at 1: less than 1.

When it comes to our ratings than ICRA has rated us as A1+ for short-term loans, which is the best rating, and AA+ for long-term loans, the second-best rate. Thus, we will not face any problem in raising funds from the market. In addition, we have the option of increasing the equity base and it has been approved from the Cabinet too.