Rajya Sabha MP Rajeev Chandrasekhar said on Saturday that Vodafone Idea should either recapitalize or follow the Insolvency and Bankruptcy Code (INC). 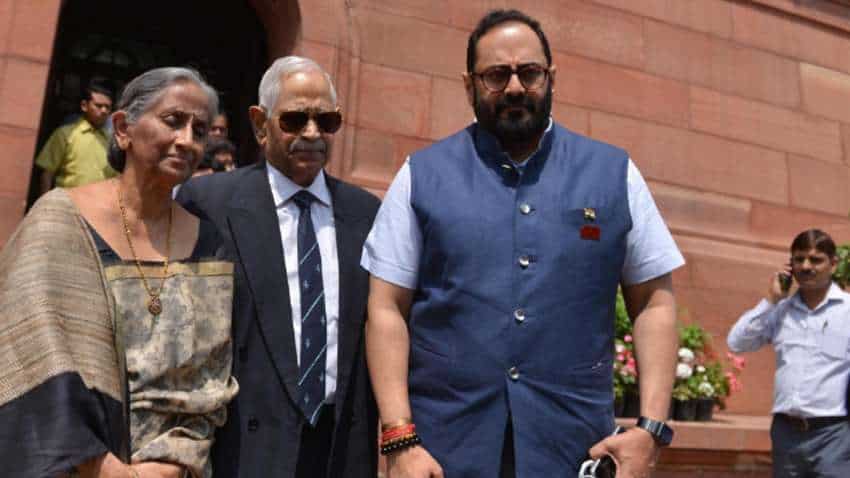 The Supreme Court on Friday came down heavily on both telecom companies. IANS photo.
Written By: IANS
RELATED NEWS

Rajya Sabha MP Rajeev Chandrasekhar said on Saturday that Vodafone Idea should either recapitalize or follow the Insolvency and Bankruptcy Code (INC).

"The solution is straight forward -- Vodafone-Idea either recapitalizes or follows Insolvency and Bankruptcy Code resolution with creditors and looks for new investors like other bankruptcies, Chandrashekhar said while commenting on the Supreme Court hearing on the adjusted gross revenue (AGR) of telecom operators.

"After Insolvency and Bankruptcy Code law has been implemented by the Modi government, the only path for companies and creditors is resolution/insolvency," said Chandrasekhar who is also a member of the Joint Parliamentary Committee which is looking into the Personal Data Protection Bill, 2019.

The Supreme Court on Friday came down heavily on both telecom companies and the telecom department (DoT) over non-payment of AGR dues amounting to Rs 1.47 lakh crore.

Commenting on the SC ruling, former telecom entrepreneur and Rajya Sabha MP Rajeev Chandrasekhar said, "I agree telecom sector has made things difficult...But a solution has to be proper and not knee-jerk."

Commenting on Vodafone Idea , Rajeev Chandrasekhar said: "Vodafone Idea is very valuable company -- with assets, spectrum, and customers. Creditors must be pro-active and ensure it is a going concern, and then look at promoter's interests. Vodafone Idea if referred to Insolvency and Bankruptcy Code can be solved with minimum prejudice to creditors".

"Telcos have very little basis to argue against AGR ruling. It is a decades old and substantive dispute that they have kept kicking down the road. Now that the Supreme Court has ruled, there is no way of avoiding it," he said.