Inching closer towards its cruise towards international, Vistara, the joint venture between Tata Sons and Singapore Airlines, on Tuesday announced it placed firm orders with Airbus for 13 aircraft from the A320neo family and with Boeing for six 787-9 Dreamliners. 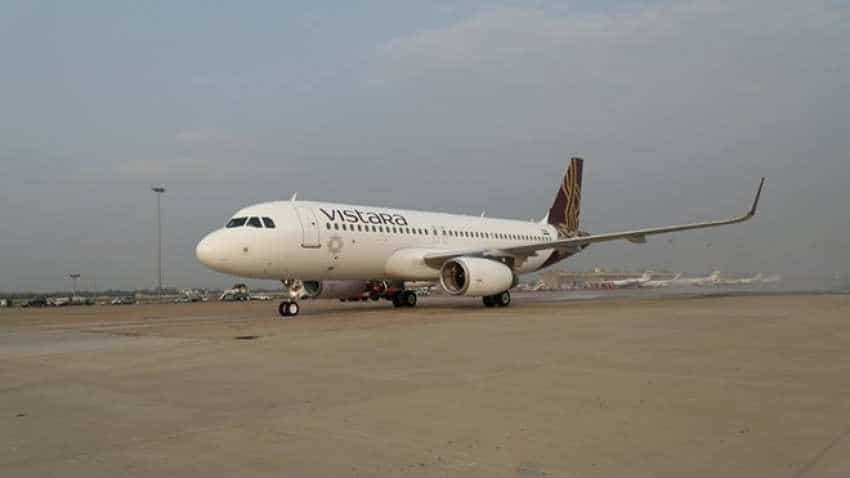 Vistara, the joint venture between Tata Sons and Singapore Airlines, on Tuesday announced it placed firm orders with Airbus for 13 aircraft from the A320neo family and with Boeing for six 787-9 Dreamliners. Image source: Reuters
Written By: ZeeBiz WebTeam
RELATED NEWS

Inching closer towards its cruise towards international, Vistara, the joint venture between Tata Sons and Singapore Airlines, on Tuesday announced it placed firm orders with Airbus for 13 aircraft from the A320neo family and with Boeing for six 787-9 Dreamliners.

The airline said the letter of intent signed with Boeing comprises six firm 787-9 Dreamliner orders and purchase rights for four more aircraft from the 787 Dreamliner family. Vistara has selected the General Electric GEnx-1B engines to power the aircraft, which are scheduled to be delivered between 2020 and 2021. The 787-9s are intended for use on medium-haul and long-haul international routes.

According to a statement issued by Vistara, the airline has selected the LEAP 1-A engines from CFM International to power the A320neo and A321neo aircraft, which will be due for delivery between 2019 and 2023. The airline will use these aircraft to densify its domestic network and to support its international operations planned for later this year.

Leslie Thng, CEO, Vistara, said that India’s position as the world’s fastest growing domestic aviation market and its impressive growth in air passenger traffic that has more than doubled over the last decade has made the airline confident of its aggressive plans for domestic expansion and international foray.

Operating in one of the world’s most competitive aviation markets, Vistara has cornered 4% of the domestic market, but has not yet become profitable. The airline insiders said that right from its inception, the airline management has been looking to fly international destinations. Vistara’s existing fleet includes 13 Airbus A320neo and eight A320neo aircraft, and has already qualified to fly internationally. From the initial order, Vistara has an impending delivery for one A320neo which is due in September 2018.

The airline serves 22 destinations with over 800 flights a week and fleet of 21 aircraft.

Surprised at the choice of 787-9 Dreamliner aircraft, Agarwal said, “It seems that Vistara is taking its steps cautiously as 787-9 Dreamliner being a mid-sized aircraft, the airline will not be under pressure to fill a larger number of seats and has an option to go for a larger aircraft later on.”

The rival airlines are not far away from firming up their fleet to push their international operations, as Indian airlines collectively have placed an order of over 1,000 commercial aircraft which translates into 2.2 planes for one aircraft already in use. The country presently has more than 550 aircraft in service and every month, and deliveries are happening every month.