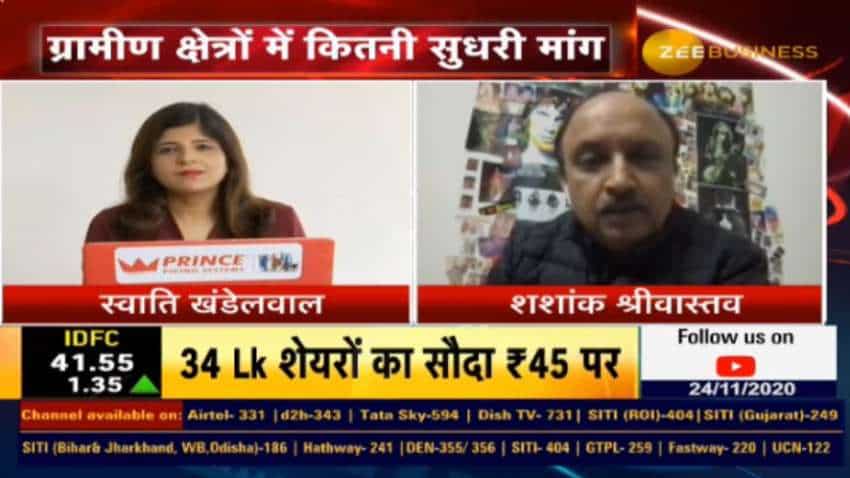 Q: There are reports on the street that you have increased your production target for November to March by 2%-11%. Can you please confirm this? Also, tell us the indication that you are getting in respect to demand?

A: As far as demand is concerned, since the lockdown has been opened there has been a month-on-month improvement. It started with Zero in April, then May was better than June was better than May, July was better than June and so on. And, the festival season which fell in October was very good and the half of November, which was Diwali season, has also been quite good, in fact, slightly better than last few years. I think the demand bounce back has been there and in response to that obviously, the production will follow. So, I would just say that the level of demand pattern, the existing bookings that are coming in and the inquiries that we are getting is still good. The only thing is that we believe it is also a part of the pent-up demand. And going forward, there is slight uncertainty on how long it will last.

Q: I would like to know about production and reports are suggesting that you have increased production targets from November to March by 2% to 11% and it is a big development. Can you please confirm it?

A: As I look after marketing and sales, so I would not like to say anything in respect to production figures because obviously, the production colleagues make plans will definitely work on some numbers. But as I said, going beyond the next quarter is uncertain. And, the uncertainty is coming largely from the COVID situation. So, I am not able to first-of-all find out exactly what report you are referring to, therefore, it will be hard for me to make any comment on it.

Q: You have attained a 51% market share in retail sales, may it be CNG or petrol. What kind of trends you are seeing there? Also, name the particular models on which you are bullish the most and which are the products on which response is good? How the launch process is looking?

A: We have many models with good performance in our portfolio. In fact, if you have a look at the top 10 models in the industry then 7 belongs to Maruti Suzuki. So, we have a very wide portfolio and it is a very big advantage for us in the market as we have vehicles for all types of customers. We build up this portfolio after a very deep understanding of customers and over many years. The good and high-performance models include Baleno, Swift, Alto, Wagon R, Brezza and Ertiga. If you have a look at Brezza, people were saying that its numbers will go down when it will come only in the petrol version but still it is number 1 in its segment, although it has got only petrol and the reason, we believe is that there has been a fundamental shift from diesel to petrol across all segments. If you look at the hatch segment then less than half a per cent is present in diesel, if you look at the passenger cars then it is below 1.50 per cent, Similarly, in SUV, the entry-level in the SUV, which stood at 62% last year has gone down below 30%. This is one of the reasons is that people are preferring petrol not only because of economic logic. People generally say that diesel was in huge demand in the SUV segment in the past and it is correct even today in mid-SUV that is the trend but the situation has changed completely in the entry-SUV because people in India use SUVs within the city not exactly for off-roading for which they need a sophisticated performance that only a petrol engine can provide and Brezza is very strong for the purpose and this is why you see Brezza in the top 10 models.

Q: You have also started a service ‘Subscribe’ and have expanded it to Mumbai Chennai, Ahmedabad and Gandhinagar. Tell us about it and the kind of response you are getting on it and its comparative advantage over a car taken on EMI?

A: First of all I would like to tell what subscription is. Subscription is a service in which the vehicle remains with the customer, he uses it and makes a monthly payment but he doesn’t own it. It is an asset-light way of using a car. In other words, he just makes a payment and has not to bother about the insurance, finance, margin money or anything. He just makes a monthly payment to the leasing company and this process is termed as a subscription. He can take this subscription even for a few months, like 6 months, 12 months and 24 months, while finance is made for 4-5 years. So, if someone is transferred and he knows that he is going to reside there just for 2 years than he can take the subscription. And after the pandemic, when people do not want to commit a large amount of money either in finance for 4-5 years or a large amount of money on cash buying, then people have started preferring the subscription method. That is why we have brought the subscription. As far as a response is concerned then we have received around 6,500-7,000 enquiries, although we have launched it in just three-four cities. Now, we are expanding it in other cities after seeing a good response on it. I think, this is another way or option to customer to own the car and I think it is going to be a fantastic way or a new option which is given to the customer when he looks forward at continuing the good performance in the subscription sector as well.

Q: If a person has Subscribe Wagon R for a month on the what will be the pricing and is it going to be a different one for different cities or the price will be uniform across the nation?

A: What happens in this arrangement is that the customer first comes to the dealer and says that he wants a subscription for these many months, six months is minimum of course. After this, the dealer takes him to a leasing company with whom we have the contract. He will get the vehicle there and then he can use it. This is how the system works and its pricing is different. For a new vehicle like Wagon R or Swift, the price falls in a range of Rs 20,000-21,000 but it varies depending on the variant that the customer is choosing, i.e. the top-end or lower-end variant. It also depends on the segment that he is opting for Ertiga or Baleno or Wagon R. so, it varies with the segment but it is very very competitive.