UCWeb to serve as Alibaba's e-commerce media platform in India 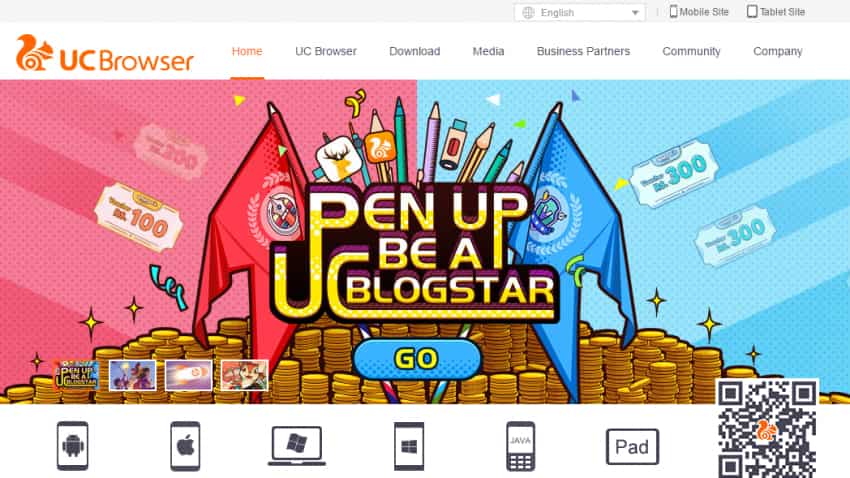 Vying to be an alternative of Google and Facebook, Alibaba Mobile business unit UCWeb is banking on its content recommendation strategy besides pushing group's ecommerce and digital entertainment business in India.

"Essence of our business is lying on the data technology. We believe that UC News is only surface how we implement data technology. It recommends people content (for consumption). Instead Google is letting people search content...We have our own study and expectation that we will be neck to neck," Jack Huang, President of Overseas Business, Alibaba Mobile Business Group told PTI in an interview.

UCWeb has announced to invest Rs 120 crore to scale up content business in India. It claims to have crossed 100 million monthly active users in November 2016 and has 57% market share (as per stat counter) in Indian mobile browser segment.

Huang sees India as the most critical overseas market for UCWeb and expects the investment will help propel company's strategy to push mobile internet to an era of  Google, UCWeb, and Facebook (GUF).

Huang said that from business angle, he thinks that search engine is still lying at the essence of entire Google's ecosystem and they have been cultivating rest of their products based on search engine ecosystem.

He said the company will target at content consumption through UC News where Google and Facebook "to some extent are not fiercely targetting at".

"In the future (content recommendation) will be better than search. That is our essence, we will definitely focus on it. It will lead our way to go down to operation system level in diverse," Huang said.

He, however, said that UCWeb does not have "any plans to develop an Operating System in the near future".

Huang said that Alibaba has many different wings and UCWeb will do cross wing collaborations.

"In India, we have Alibaba's e-commmerce going in and some other wings from Alibaba digital media and entertainment group also going in. UC will play role as a media traffic platform to support other wings. There will also be another chemistry system of all this," Huang said.

Talking about concerns over data privacy, Huang said the company will strictly follow global laws and laws of the Indian government.

"We have already set up an entire server system in India and all the data we have on our platform will be kept in India only," Huang said.

Earlier this month, UC News announced a detailed monetary compensation plan for content creation. The company has plans to add more than 30,000 self publishers, bloggers and key opinion leaders on its user generated content platform 'We-Media' in 2017.