TripAdvisor awarded the world’s top carriers on the basis of quantity and quality of reviews and ratings for airlines by TripAdvisor flyers, gathered over a 12-month period. 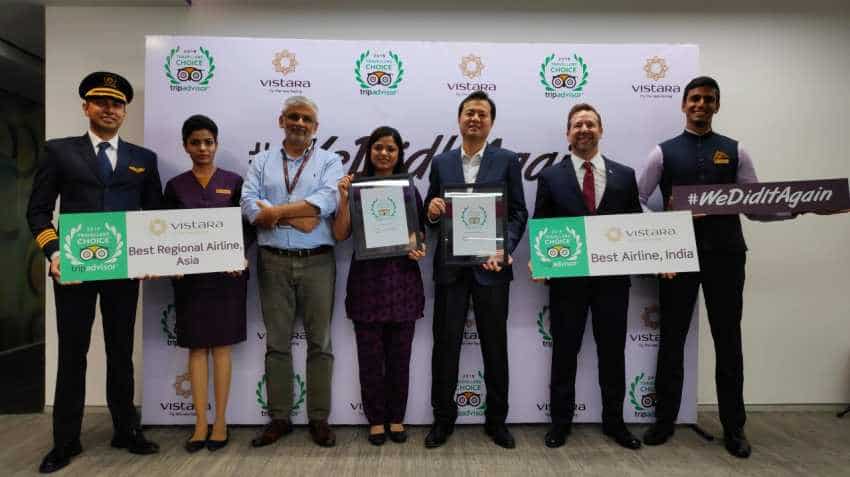 India’s full-service carrier Vistara has been adjudged as the ‘Best Airline - India’ and ‘Best Regional Airline – Asia’ in the third edition of TripAdvisor Travellers’ Choice Awards 2019 for airlines. Vistara received the honour from TripAdvisor, the world’s largest travel site, for the second consecutive year. Winners were decided on airline reviews submitted on TripAdvisor Flights or via one of TripAdvisor’s review collection partners from January to December 2018, said a Vistara statement.

TripAdvisor awarded the world’s top carriers on the basis of quantity and quality of reviews and ratings for airlines by TripAdvisor flyers, gathered over a 12-month period, said the statement.

Elated over the accolades, Leslie Thng, Chief Executive Officer of Vistara, said: “We are delighted to receive the awards from TripAdvisor. These awards truly testify the dedication and commitment of our staff across the country to delivering a seamless, world-class experience with a touch of intuitive thoughtfulness to millions of our customers. We take this opportunity to also thank our customers who found Vistara worth the valuable time they spared to submit their reviews and ratings in our favour on TripAdvisor. We assure our customers that we’ll continue to invest in making air travel an experience with Vistara that they always look forward to.”

“Congratulations to Vistara for being named a Travellers’ Choice Airlines winner again this year. The awards recognize travellers' favourite airlines worldwide based on reviews and ratings from our global community,” said Bryan Saltzburg, president of TripAdvisor Flights, Cruise & Car, adding “This accolade from consumers is a testament to Vistara’s outstanding service, world-renowned quality and great value.”

Vistara, which has also won several ‘Best Airline’ awards including from Skytrax, consistently raised the bar for operations and service delivery in the Indian aviation industry in a short span of four years.

Notably, the airline today serves 24 destinations with over 800 flights a week and a fleet of 22 aircraft and has flown over 14 million customers since starting operations in 2015.