Umesh Chowdhary, VC & MD, Titagarh Wagons, talks about the current order book situation of the company, expected order book, outlook on Atmanirbhar Bharat among others during an interview with Zee Business’s Mansee Dave. 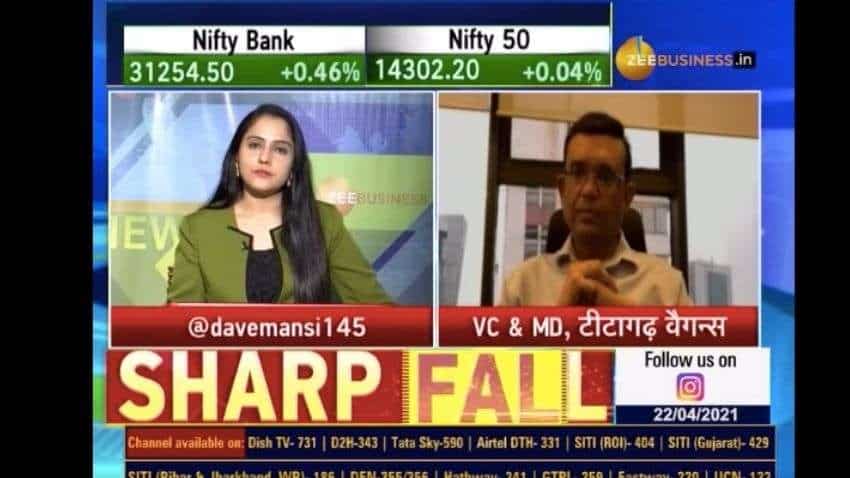 Q: What is the situation of your current order book?

A:  We declared our order book in the last December quarter and at that time, our order book of Indian operations stood around Rs 2,000-2,100 crore. And if I talk about the consolidated including the international operations then the order book stood around Rs 4,500 crore. In Indian operations, we have a wagons division, which provides mobility to the industry for the railways. The second is where we are making Pune Metro and are participating in the tenders of several other metros. Our Italian subsidiary is working on different European metro train. This also includes some orders for our defence and shipbuilding. So collectively, our Indian operations had an order book of around Rs 2,000-2,100 crore when the December quarter results were declared.

Q: Going forward, what kind of order inflow is expected?

due to which Indian companies like ours will not have any shortage of orders. However, if there is any problems or postponement in the timing due to the CORONA is a different thing. But apart from that on the overall basis, the government’s infrastructure spend and the way it has pushed all its resources over the economic revival gives a sense that there will be any big question mark on the order book and business generation.

Q: Can you provide your outlook on the Atmanirbhar Bharat and the way the sector will be benefitted? How do you see your company benefitting from the same?

A: I believe that the call for Make in India in independent India given by our Prime Minister and the government and the vision/mission of Atmabirbhar Bharat that was given last year is a revolution in itself in an independent India. Such kind of thing was not seen in India in the last 75 years. Particularly, our industry and companies like ours that was present in railway wagons have been able to enter into high technology items and have started making metro coaches and propulsion equipment. We are going to make our own traction motor and have created our design centre. So, just by attaining manufacturing Atmanirbharta will not help in achieving an Atmanirbharta but I feel there is a need to achieved Atamnirbharta in design and manufacturing. And, Titagarh has taken concrete steps in this direction. The technology available with our Italian subsidiary, maybe it is semi-high speed trains or high-speed trains or modern coaches, makes Titagarh, the only company in India who owns international standard designs. To further make them Atmanirbhar, we have opened our design centre in Hyderabad and Kolkata, so that we can bring the design concepts from Italy and work on them and make Titagarh a 360-degree Atmanirbhar from design to manufacturing to services. We have many business verticals, maybe it is shipbuilding in which we have signed a shipbuilding order contract with the Navy recently, earlier we have made and supplied some ships as per the schedule to National Institute of Ocean Technology, we are also working for the defence. So, all of these things have been made possible mainly due to Atmanirbhar Bharat and Make in India.

Q: You have got an order worth Rs 174 crore from the Indian Navy recently for the construction of 5 driving support craft and supply. What is the situation of the order and amid the ongoing situation, do you expect that there can be any delays in completing the orders?

A: The preparatory works, maybe it is of design or model, are going as per the schedule. Recently, in the last 2-3 weeks, a huge breakout of the COVID pandemic has surfaced due to which there can be some impact in the supply chain or progress. We as responsible corporate citizen have reduced our Oxygen consumption to a great extent in the last few days, voluntarily. If we will have to slow down the production, we will go for it. But it is a very unimaginable situation and we are going through an unfortunate period. But I don’t think that due to this if seen over a period of time, it will have an impact on the business. This is a difficult time that will pass and to overcome this, the Indian industry, particularly Titagarh – when the COVID pandemic comes under some control – we will make up the lost time.

Q: In commodity prices, a rising trend has been seen, like steel. How much do you see this impacting your margins?

A: This is a little worrisome issue for the industry, particularly for the manufacturing industry, as commodity prices have shot up a lot recently. The prices of steel are increasing almost every week. Apart from this, prices of almost everything, maybe it is Graphite Electrode or non-ferrous metal, have shot up a lot. We have many contacts, which have a price deviation clause. However, some contracts are of fixed prices. We are evaluating them and adopting the best possible risk mitigation strategy. Every contract has its own strategy but yes we see an alternative, not only for Titagarh alone but for the entire manufacturing industry. The commodity prices, particularly steel prices which jumps almost in a week or a fortnight and I believe that the world market pricing will find a level in the next few days and will stabilize.