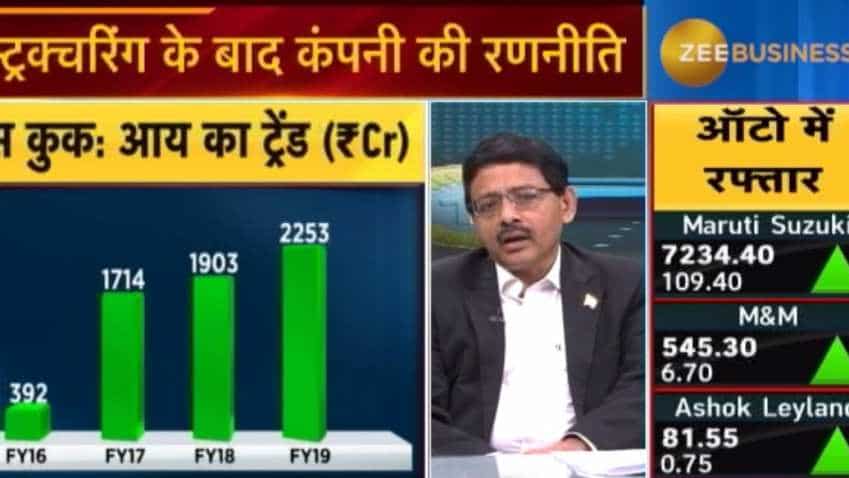 It will have an impact on your business and books by?
It will be seen next year as the record date for restructuring is December 6, 2019. The restructuring will benefit us in two ways (i) It will benefit the shareholders by ending the existing confusion in the market, which occurred because Quess Corp is a listed company and at the same time it is also a subsidiary of Thomas Cook. With this, the shareholders will separately get the shares of Quess and the process will enable them to decide how to organize their strategy and where they want to be i.e. in travel or HR or both; and (ii) it is simplifying the business and structure. We had certain cost holding in few companies like Tata Capital's Travel and FOREX (foreign exchange) business that was acquired by us, it was a separate company but is being merged now, so it will help in reducing the cost in FOREX and travel business. These benefits will be visible from next year.

Have you estimated its benefit in terms of profitability and margins?
Its result will be seen in next one-two quarters.

How has been your booking trend in October and November so far?
Winter season is not so good for outbound and mostly remains for short halls like Thailand, Singapore and Malaysia. We are really focusing on next summers, April to July, which is the main season for us and its forward booking has started and has grown by 9% when compared to last year. But, to be honest, making any comment on it at this juncture is a difficult task as just its an end of November and December and January haven't started yet. However, trends are good in spite of what is happening in the economy.

One of your rival firm in India, Cox & Kings, is in a deep financial crisis? How are you placed in terms of debt position and what sort of opportunity has it been for you amid this situation?
Thomas Cook's financial position is quite strong and if you have a look on our September quarter results than you will find that our total cash in bank balance is about Rs1,100 crore and debt of Rs403 crore. Thus, our net debt is negative and we have more cash when compared with debt. Interestingly, this debt of Rs403 crore is not available in the standalone books and has no relation with the listed company, Thomas Cook. All, the debts belong to subsidiaries and mostly relates to working capital. This will be repaid over a period of time.

When it comes to the acquisition of Cox & Kings customers and market share then I would like to say that Cox & Kings was a big competitor and it will have an impact on the market. It has two parts and they are B2B and B2C. When it comes to B2C then we will really get to know about it in next summers, when the travel season will begin. I think the market share will be distributed a bit between various players but Thomas Cook's dominant position in the market as B2C player may pull more shares towards itself.  On the B2B side, it will take some time but we have seen a trend in which few of the corporate houses have contacted us and we have won certain contracts. But, the picture will get cleared in next one-two quarters.

Do you plan to make any further acquisitions in FY20 or have reached an advanced stage of talks with someone, if yes, then let us know about the segment where the acquisitions will be made?
We are not looking at any acquisition proposal at present but as we say that we always keep our eyes and ears open then we may proceed. However, we are trying to consolidate that has been acquired to post good results and earn better profits. Secondly, we have invested a bit in travel tech, last year, and own 24% stake in 'Ithaka', a startup. This primarily sells travel experiences to people through an app and this is typically for the age group between 20-35years, i.e. the young crowd, who generally don't go to the brands and it is targeting the same group. Thus, we have interest in tech-related areas and we may look at something that shoots to our business but there is no scope for a big acquisition, at present.

How are positive you are in the context of overall bookings, top line, bottom line and margins?
The results of the first six months are out and it has improved a bit, but not as per expectation because the economy has not been doing well. Globally, certain disturbances like Hong Kong, Middle East and European market due to Brexit will definitely have an impact. But irrespective of this, I think that we will end the year as a decent year.