This is how Mukesh Ambani’s upcoming JioPhone 2 will impact other smartphones; Lava, Mircomax, Intex to face heavy heat 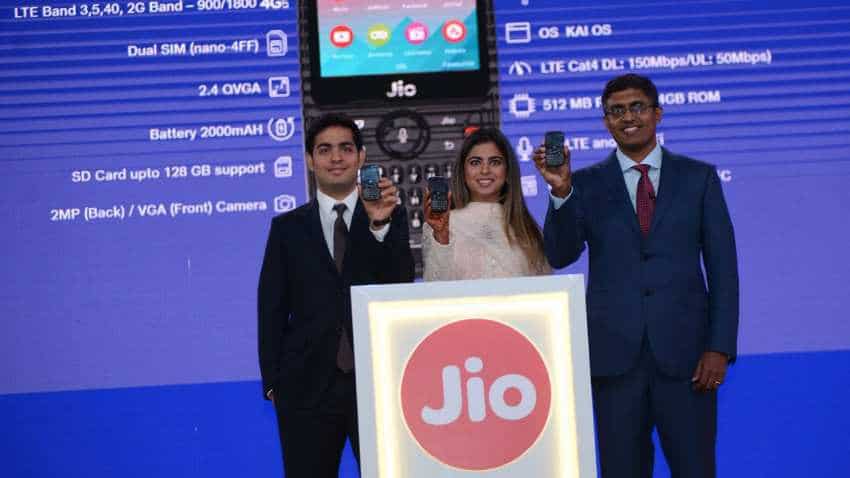 Table is being set for a new phone in the Indian smartphone market. However, not everyone would be happy for this new launch which is going to take place on Independence Day. Yes you have guessed it right, the next smartphone every Indian citizen is eying would be Mukesh Ambani’s JioPhone 2. This was announced in the 41st AGM meeting of Reliance Jio’s parent Reliance Industries. Ambani announced a ‘Monsoon Hungama’ offer for its feature phone who has gained traction in past 22 months. Ambani celebrated 41st AGM meeting of Reliance Industries by referring it to Golden Decade. The highlight of the latest meeting was definitely RIL’s nearly two years old telecom arm Reliance Jio.

At first, the company has reduced the effective entry cost of the JioPhone from Rs 1500 to as low as Rs 501. That’s a benefit of Rs 1000 for becoming a member of RJio. We all know the benefit a JioPhone gets you in once you become a subscriber of Ambani’s telecom arm. This offer will commence from July 21st, and any customer can  exchange their existing feature phone for a brand new JIOPHONE for just Rs 501!

Not only this, starting from August 15, JioPhone2 will be available at an introductory price of only Rs 2999. This would be second time Ambani has introduced a new offer under Reliance Jio during India’s Independence Day. Features of JioPhone 2 includes LTE Band, Dual sim, 2.4 OVGA, 2000 mAh battery, sd card up to 128GB, loud mono speaker, 2MP back camera with VGA (front) camera, qwerty keypad and 4-way Nav Key.

To the upcoming JioPhone 2, Bhupesh Raseen, Mobile Advisory Committee Chairman of The Mobile Association told ET Telecom,  the phone is going to be available in exchange for any old phone. For example, normal retail prices for 4G feature phones offered by various brands such as Micromax and Lava range from Rs. 2,100 for the Micromax Bharat 1 4G model, to Rs. 3,333 for the LAVA 4G Connect M1 model.

According to Raseen, if RJio  is permitted to offer a similar phone at the much lower price point of Rs 501 per unit, the businesses of genuine mobile vendors like Intex, Itel, Jivi Mobiles, Karbonn, Lava, Micromax and nearly 100 other brands will be rendered uncompetitive and unviable overnight.

In a shocking move, JioPhone 2 can almost lead the above mentioned brands to shut down their manufacturing and sales operations.

In the interview, the TMZ chairman even highlighted that JioPhone devices are not ‘Made In India’. According to him, RJio’s smartphones are being imported from China. He also revealed that, this 22 months old telecom service provider is even planning to import large volumes via Indonesia to enjoy 0% customs duty.

Therefore, at least 100 brands will be impacted by the entry of JioPhone 2, and companies like Intex, Itel, Jivi Mobiles, Karbonn, Lava and Micromax will be most impacted.

As for major smartphone makers like Apple, Samsung, Oppo, Vivo and Xiaomi will not see much impact, as according to Raseen, the bulk of their shipments and revenues accrue from sales of smartphone devices.

Ambani in the meeting said, “With the added functionalities, our wider network reach across India and strong retail presence across India, the goal that I have now set for our Jio team is to enable 100 MILLION users on this JIOPHONE platform in the shortest possible time.”

"Our purpose is to accelerate the Digital Revolution in India with the extreme affordability of a JioPhone, so that each and every Indian can access the internet and enjoy the Digital Life,” Ambani said.