The government in Budget 2019-20 should announce projects that start a cycle of capacity and private capital investment, says MS Unnikrishnan, MD & CEO, Thermax. 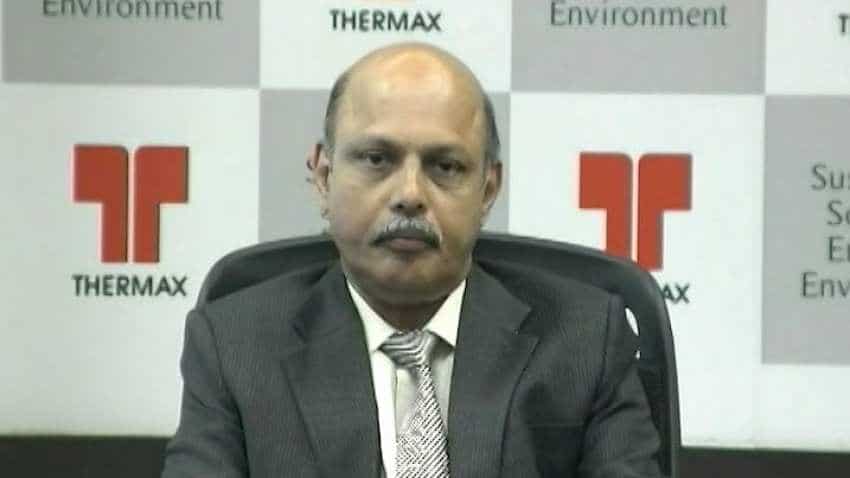 Unnikrishnan during an interview with Dimpy Kalra, Zee Business, said that his company is majorly functional in energy and environment segment.

The government in Budget 2019-20 should announce projects that start a cycle of capacity and private capital investment, says MS Unnikrishnan, MD & CEO, Thermax Ltd. Unnikrishnan during an interview with Dimpy Kalra, Zee Business, said that “Our company is majorly functional in energy and environment segment and these two segments will be used for expansion in markets like India, Middle East, China, South East Asia, Africa, South America and Eastern Europe”. Edited Excerpts:

Q: What are your budget expectations for your sector?
A: The industry, in the last 5-6 months, has witnessed a slowdown in capacity building and investment. So, I expect the government in this budget should announce projects that encourage and starts a cycle of capacity building and private capital investment. For that purpose, it should announce and allocate big projects like road, infrastructure, ports, airports and dams. The announcement cannot be of any use if the projects are not allocated as the process of finalisation of the orders takes a long time of about six months to a year. This is the first area where we are expecting.

The second thing is the creation of Jobs as job creation is a necessity because the jobs creation has not been in proportionate to the growth that has happened in the last three years. So, private investment is very important for job creation. I think the government should private investment support in some selected areas like manufacturing, process, healthcare and wellness areas.

Q: What are your hopes related to the natural and renewable business, as the government has a positive bent towards the section?
A: Our European subsidiary, which went into losses last year, will turn profitable this year, maybe not in the first quarter but it will move from the negative zone to positive by the end of the year. In fact, it will remain positive across the year.

In addition, last year, we have started production at our Indonesian subsidiary and its top line will grow by at least 100 per cent in this fiscal. Although, we have predicted that it will reach its breakeven point in five years but will try to neutralize the EBITDA in the second or third year of its operation.

As far as, the Chinese subsidiary is concerned then I have already informed that its operations will be shut down because it is a bit difficult to take the company forward. So, we have to make a decision on it but there is no hope to keep it floating.

Q: For FY20, in which segments do you expect max order inflow growth?
A: Surprisingly, big projects are not visible in FY20, but we have some medium size projects – valued between $ 10 million – 38 million – which are at a discussion level at present and few have reached to finalization level. The enquiries for our normal standard products - like standard boiler, absorbent chiller, standard water treatment plants, and normal air pollution control equipment - is stable. And, I think that we will receive more orders for these normal standard products from the international market as it happened last year.

Q: What are your CapEx plans for FY20 and FY21?
A: We don’t have any major capital expenditure in FY20, however, Rs50 crore has been sanctioned for phase II of the chemical factory and it is the only thing that will happen. Apart from this, we will be spending a little for digitization. So, we don’t have anything big in our kitty in FY20, but we will have something in FY21 and we are working on the plans.

Q: Are you planning to introduce new products across different segments?
A: New products will be launched within the verticals, but we are not entering into any new area. For instance, in the energy area, we have started an electric boiler in Polish and Danish factory in Danstoker. In the case of India, we use coal, oil or gas to generate steam, but we have launched electrical products to generate steam in these countries. So, we have introduced such products and they will be acting as a variable product within our existing family. So, we are not entering any area this year. But, next year, our R&D will allow us to launch a few new products in the market.

Q: Your business has its presence in around 20 different countries including Bangladesh, the Netherland, the UK, Mauritius, Russia, US, Germany among others. Name the geography from where maximum growth is coming from?
A: Our company is majorly functional in just two areas, energy and the environment. Chemical is a small segment. So, energy development in the developed world is fairly ok, but it should develop in markets like India, the Middle East, China, South East Asia, Africa, South America and Eastern Europe. So, our future market expansion will be limited to these territories only. Incidentally, energy production can threaten the environment of all the places where they are being produced. So, as a follow-up procedure, our energy business will be moving to these countries wherever the energy business will reach. So, in future - in the immediate and medium term of 5-6 years – we will expand ourselves in these markets only.

Buy Tata Power, Bharat Electronics, Thermax for up to 15% return in near term

Thermax's role to be broad-based or specific depending upon how Green Hydrogen sector grows in India, CEO & MD Ashish Bhandari says