Despite the ongoing debate on whether Aadhaar linkage with numerous documents is safe or not, telecom operators who are carrying out orders by the government are pushing subscribers to re-verify mobile numbers with Aadhaar. 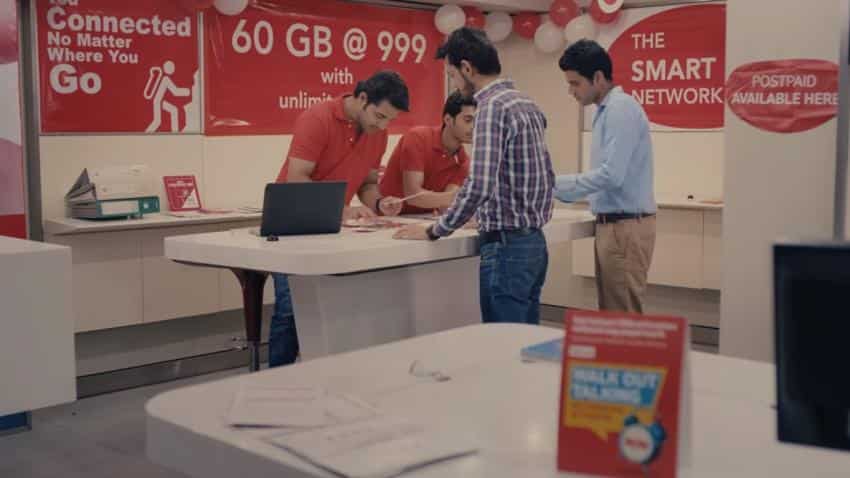 'Is  it compulsory to link my phone number to Aadhaar?' This is a question a lot of people out of 100 crore mobile subscribers in India are currently asking.

Telecom companies, including Airtel and Vodafone are sending ‘reminder’ SMSes to their customers to get mobile numbers re-verified with respective Aadhaar numbers in order to continue using services.

This move came after the Supreme Court in February this year said that all phone numbers in India should have verified users.

India’s top court did not give specific directions to verify all numbers with Aadhaar however this was decided by the government of its own accord, a report by Live Mint said on March 25.

Shortly after, a notice was issued by the Department of Telecommunications (DoT) in the month of March which directed all operators to re-verify existing customers, prepaid and postpaid, using their unique Aadhaar identity number and biometric details.

While this re-verification process was accelerated in the past month, the nature of the SMSes from telecom operators were of a threatening nature that read services would be terminated if not linked with Aadhaar soon.

“Sarkaari nirdeshanusar, aapka mobile number AADHAAR se jode anyatha apka number band ho jayega (As per government directive, it is mandatory to link Aadhaar with your mobile number else your number will be terminated),” a message from Vodafone Care read. 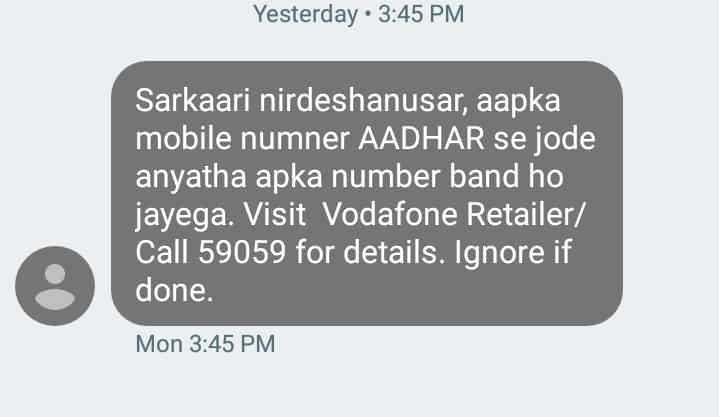 Airtel has also been circulating similar messages that read, “As per Government directive, it is mandatory to link Aadhaar with your Airtel mobile number. To enjoy continued services, update Aadhaar for free ONLY at retailer.”

Mobile subscribers have now taken to social media platforms to rant over this urgency created by their network providers and the umpteen messages to link Aadhaar with mobile numbers.

The deadline for all mobile service providers to get Aadhaar linked to respective mobile numbers was specified as early next year. “Any unverified mobile phone number, or any number that is not linked to Aadhaar, will be illegal after 6 February 2018,” the report by Mint added.

Telecom operators maintain that they are currently not terminating or temporarily halting services of any customer who isn't agreeing for re-verification using Aadhaar.

“We are not stopping on halting any services,” Airtel said.

“Airtel has a large customer base of 280 million (28 crore). Customers receive a simple contextual reminder to complete their Aadhaar based verification when they are at a retail outlet for recharges or while making payments etc. Customers can complete the process as per their own convenience [before the deadline],” an email from the company read.

“While for an individual customer, it might not be a short deadline. However, we serve over 211 million (21.1 crore) customers and need to re-verify this existing customer base, which is a mammoth task,” said Mandeep Singh Bhatia, EVP – New Business Initiatives, Vodafone India.

He further added, “Given the size of the task to be done, Vodafone’s robust retail network will play an important role in the success of this initiative. However, there needs to be an increased awareness amongst consumers. We have initiated communication with existing customers about the necessary requirements through multiple touchpoints like direct emailers, SMS, retail outlets, etc.”

Vodafone said it has re-verified nearly 5.27 crore subscribers till date.

“We have rolled out the exercise across all our 10,000 Vodafone retail stores and 5 lakhs Multi Brand Outlets across India. Nationally, over 25% of Vodafone customers have been re-verified,” Bhatia added.

A Reliance Jio official who wished not to be quoted said, “Given that Jio had majority of its customers enrolling into the network last year via e-KYC very few have enrolled without giving Aadhaar and biometric details.”

“It is for the ease of customers, that we are urging them to get their SIMs linked to Aadhaar now, so that they avoid the long queues during the last month,” Vodafone’s Bhatia said.