The company expects the lower costing pick-up to be successful with the implementation of GST expected shortly this year. 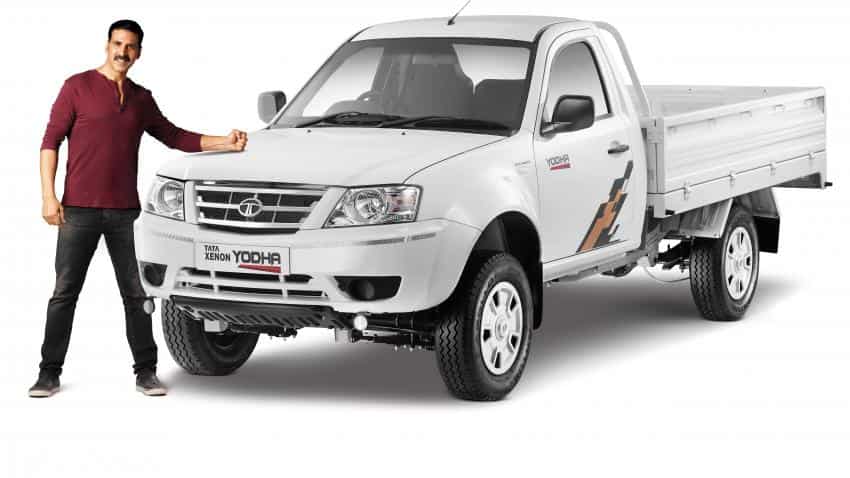 Tata Motors on Tuesday launched its first product of the year, the new Tata Xenon Yodha, in the presence of its newly appointed brand ambassador, Akshay Kumar. The new Tata Xenon Yodha is suitable for a wide range of commercial applications and lowest operating cost. The new pick-up was launched at a starting price of Rs 6.05 lakhs (Single Cab- BSIII) and Rs 6.19 lakh (Single Cab – BSIV).

One of the key highlights of the new Xenon Yodha include high gradability enabling the vehicle to negotiate any terrains in loaded conditions, supported by bigger 16 inch tyre. The durable body is supported by 4 mm chassis frame, with reinforcements and a strong rear axle with unitised double bearing. The additional strong suspension – 5-leaves at the front and 9-leaves at rear, ensures better safety in loaded conditions and at high speeds.

Ravi Pisharody, Executive Director – Commercial Vehicles, Tata Motors, said “Besides bolstering our presence in the growing pick-up space, the new Xenon Yodha will also enable us to partner existing mini-truck customers, aspiring the next phase of growth, to upgrade to a reliable stylish pick-up – particularly in the post GST regime and on the back of improved road infrastructure, which will see the hub and spoke model of distribution, become more and more prominent. The new Xenon Yodha is an ideal work horse for diverse commercial usage and with this new range, we are confident of extending our lead in the light commercial vehicle category, complementing the success and popularity of the Tata Ace range of small commercial vehicles.”

Pisharody further added, “I am happy to have Akshay Kumar here with us, for the launch of the new Xenon Yodha – the first Tata Motors commercial vehicle, the actor is making an appearance with. Tata Motors’ association with Akshay Kumar will be supported by a high-decibel, 360 marketing campaign, starting with the Xenon Yodha. Besides products and solutions, Akshay will be actively involved in a host of innovative marketing and customer experience initiatives, to be rolled out by Tata Motors commercial vehicles division.”

As part of its launch Tata Motors has offered a ‘Buy Back inaugural offer’, with an assurance of 50% of the asset cost, after four years of vehicle usage in captive applications, the first ever in the pick-up space. The new vehicle is also offered with a first-in-segment customized AMC package of 3 years / 1 lakh kms (whichever is earlier) and comes with a best-in-industry assured Warranty of 3 years or 3,00,000 km (whichever is earlier), for complete peace of mind to customers.