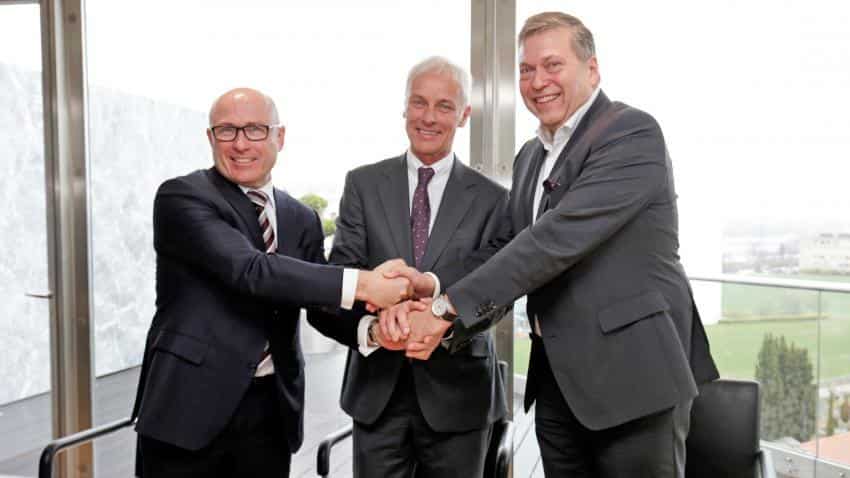 Tata Motors signed a memorandum of understanding (MoU) for a long-term partnership with VW and Skoda for joint development of products. Photo: Tata Motors
Written By: ZeeBiz WebTeam
RELATED NEWS

Rakesh Jhunjhunwala Stocks: Big Bull makes some changes in portfolio - Do you know the names of these shares held by him?

On March 10, 2017, Tata Motors said that it has signed a memorandum of understanding (MoU) for a long-term partnership with VW and Skoda for joint development of products.

Moody's Investors Services in its report said, “We believe TML could exploit and leverage significant synergies, a credit positive for TML and the two European companies.”

While announcing the deal, Guenter Butschek, CEO and Managing Director, Tata Motors, said, “We strongly believe that both the companies, by working together, can leverage from each other’s strengths to create synergies and develop smart innovative solutions for the Indian and overseas market."

Here's how Moody's feel that all three companies involved will benefit from their joint agreement.

This collaboration is expected to  revitalise Tata Motors product suite in passenger cars in India - a segment which has been a challenge for the company for more than 10 years.

Competition arising from both domestic and foreign automakers, has reduced TML's shares by 5.5% in previous fiscal (FY16) compared to 8.7% market share witnessed in the fiscal year FY13.

Importantly, the collaboration is expected to bring in successful new product launches, which will enable TML's to increase its capacity utilisation levels in the passenger vehicles segment to at least  by 50% and hence will be a support in reducing  the drag on profitability.

Given Volkswagen and Skoda's large global operations, a collaboration with TML will not bring in meaningful effect on their earnings but an increasing focus on fast-growing emerging markets such as India makes the deal compelling.

Also, the deal is in line with VW’s long-term strategy to partner with regional players in the small-car segment.

Moody's said, "A successful alliance with TML with its well-entrenched dealer and distribution network will help improve VW’s and Skoda’s market shares in India.

Rakesh Jhunjhunwala Stocks: Big Bull makes some changes in portfolio - Do you know the names of these shares held by him?