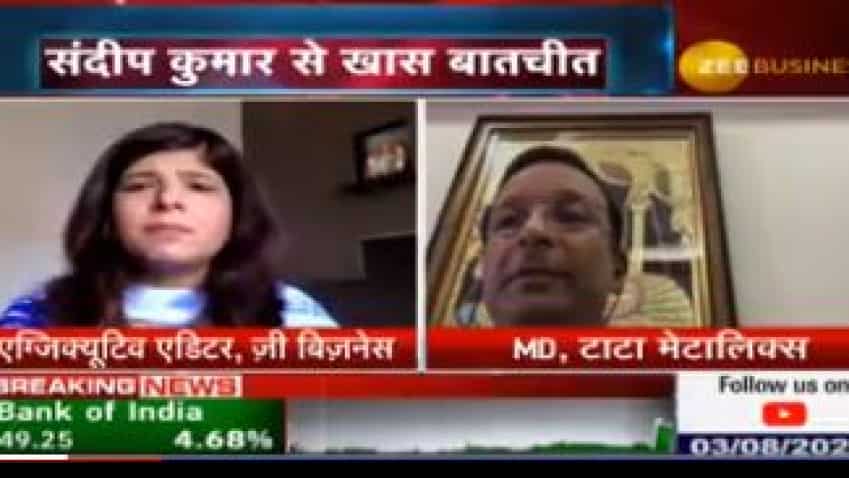 Right now, 100% capacity is being utilized at both blast furnaces as well as DI Pipe plant. It ran at 100% in July, while we took few days to restart the plant in June, Sandeep Kumar said
Written By: Jitesh Kumar Jha
Edited By: ZeeBiz WebTeam
RELATED NEWS

Q: As expected results are weak as there was an impact of Corona. How will you summarize the quarter and what demand is expected in future? Going forward, what is your business outlook?

A: The company’s performance has been in the line of the economy in the first quarter. In fact, we anticipated worse results due to the way the Coronavirus has affected the economy. But surprisingly, June was much better for us as we had reached almost 100% capacity utilization in the month. July has been a very good month for us. If we have a look at the first-quarter results then definitely it is down but has been in the line of the expectations and there is no need to be surprised. But, the surprising thing is that the recovery has been very good. We thought our EBITDA will be negative this time but the operating profit has been positive of around Rs 11 crore although we ran the plant effectively just for a month in June, however, it also ran to some scale in May, when the plant was restarted. Expenses are fixed costs and effectively we spent for three months, while the revenue primarily came in June, while a little bit of revenue was earned in May, as well. Thus, overall, it is not surprising that there has been a loss of around Rs 12 crore in the profit after tax (PAT). But it looks positive in the future and what will happen next depends on how this pandemic will pan out but we are in a good position at present.

Q: Let us talk about the Ductile Iron (DI) pipes segment where strong growth has been seen in a couple of quarters but the lockdown has reduced the segmental revenue by 50%. Can you tell us the capacity at which you are operating at present?

A: Right now, 100% capacity is being utilized at both blast furnaces as well as DI Pipe plant. It ran at 100% in July, while we took few days to restart the plant in June although the two-shift operations were started in May itself, towards the second half of May. However, the full capacity utilization was reached by the first week of June and demand was good in the month. June was quite good for DI Pipes, July has been decent. Now, the months of monsoon has arrived, the season when demand remains weak as work doesn’t happen at the sites. Accordingly, the DI Pipe segment has done well. Prices have been remained reasonable, it was expected that it will have huge impacts but it hasn’t happened. If you have a look at the pig iron than in the past 15 days, there has been a price increase of almost Rs 2,000 in it. So pig iron is again looking strong. Thus overall, the second quarter looks good but two months are left, so we have to see how things unfold in this period.

Q: Tata Metaliks margins have almost halved as compared to the same quarter of last year. What is your outlook on margins and do you think that a better margin trajectory can be seen in future quarters?

A: The EBITDA margin impact is primarily related to the volumes. Our sales volume has effectively remained at 50%of the month and this had an impact on the margins. If you have a look at the numbers of July then we are back to pre-COVID levels. The impact of the work that we were doing on margin, sales, production and the cost for the last two years was seen in the fourth quarter, which has been one of the best ever quarters for us. Similarly, July’s performance has also been one of the best to date. Our performance has been quite strong in July but as I have said earlier that we will have to look at the market conditions in August and September. So far, August looks good for the pig iron and we will have to look at the DI pipes due to monsoon.

Q: How much is the order book at present, also tell us about the new orders that you received in the last 3 months and what is your outlook for the future? Also, tell us the kind of performance you are anticipating in FY21?

A: The order book of DI Pipes has weakened a bit in the first quarter as everyone was sitting at their homes and there was no work. Normally, we have an order booking of 9-10 months with which we are comfortable. Right now we have an order booking of more than eight-plus months, so we are reasonably comfortable. As far as enquiries are concerned, then we are receiving bulk enquiries from Uttar Pradesh, Andhra Pradesh, Telangana, Odisha and Haryana and they will be completed in the next three to six months because it requires tie-ups. I believe that lot of firmness on dispatchable orders will be achieved towards the end of the third quarter.

We have an order book but the dispatchable order depends on certain factors like are the funds being released or not and work is going on at the site or not, so this creates a gap. I think the way good enquiries that are coming out now will be concretized in the next three to six months and will be converted in orders. Thus, going forward the situation will turn much stronger.