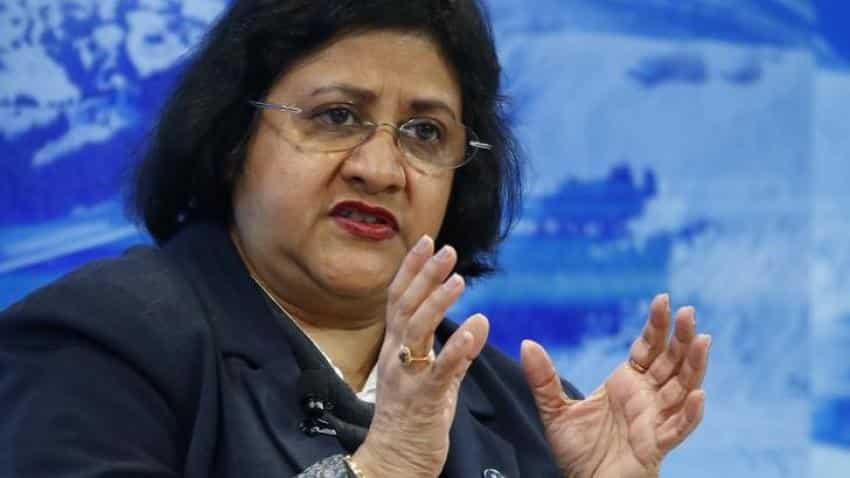 The head of State Bank of India

Chair Arundhati Bhattacharya also said in an interview that signs of more factory activity pointed to a turnaround in India`s weak credit cycle this financial year - welcome news for a government keen to revive private investment.

State-run SBI this month merged five subsidiary lenders and absorbed them into the parent company. It had fully owned two and had majority stakes in the others, but all had previously operated separately.

Workforce integration will start in June, said Bhattacharya who joined SBI 40 years ago and rose through the ranks to become its first female chief in 2013. SBI has said it will shut or move some branches and close overlapping units.

"Total bottom line impact (of) around two to three thousand crores (20-30 billion rupees) is what we are thinking of," she said. "I`ll have a better hang of these numbers by the middle of May."

That would compare with a net profit of 115.9 billion rupees for the year ended March 2016 if results of the five subsidiary banks were included.

Profits at state-run lenders have been under pressure, weighed down by a record $150 billion in stressed assets. The pile of bad debt, combined with slower economic growth and deferral of large projects, has prevented lenders from boosting credit growth.

As of March 17, banking sector loans had grown just 4.4 percent, compared with 10.9 percent in the previous year, the weakest pace since the fiscal year ended March 1954.

But Bhattacharya, 61, said she was hoping for good growth from the July-September quarter.

"I`ve already had a number of meetings with people saying their capacity utilisation has gone up. Commodity prices have gone up, so to that extent people are coming with working capital requests," she said.

SBI has forecast loans to grow 11 percent this financial year after an expected 6.5 percent growth in the year ended March.

Bhattacharya also said the central bank would need to offer rates matching or higher than the reverse repo rate of 6.00 percent, the rate lenders get for deposits at the RBI, should it implement a special facility to drain cash from the banking system.

India`s central bank wants to withdraw some of the big cash pile accumulated in the banking system since the government banned circulation of big currency-notes, but lenders are keen to get proper returns in exchange for transferring cash.