TV Narendran, MD & CEO, Tata Steel, spoke about the September quarter numbers and the performance of the European business, price hikes, disinvestment talks of the Netherlands business with SSAB, Port Talbot plant and expansion plans among others during an exclusive interview with Zee Business Executive Editor Swati Khandelwal 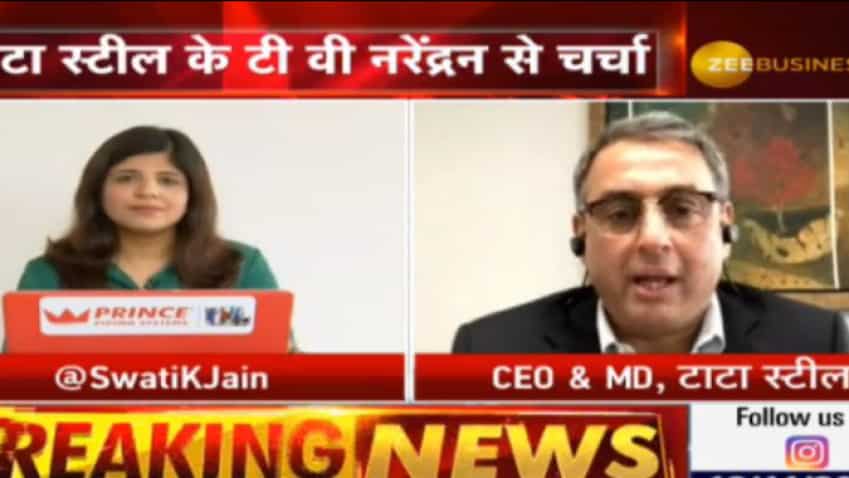 Pandemic still has an impact in Europe. The entire 100% production level is not being used in Europe but in Q2, we were probably at 70-80% production level, TV Narendran said
Written By: Jitesh Kumar Jha
Edited By: ZeeBiz WebTeam
RELATED NEWS

TV Narendran, MD & CEO, Tata Steel, spoke about the September quarter numbers and the performance of the European business, price hikes, disinvestment talks of the Netherlands business with SSAB, Port Talbot plant and expansion plans among others during an exclusive interview with Swati Khandelwal, Zee business. Edited Excerpts:

Q: Results for the September quarter were better than the street estimates. But Europe business has reported an EBITDA loss in the quarter. Till when do you expect that the situation will improve there?

A: Pandemic still has an impact in Europe. The entire 100% production level is not being used in Europe but in Q2, we were probably at 70-80% production level. In Q3 it is expected that we will be at the 90+ production level. If you have a look on the EBITDA then Q2 EBITDA was better than Q1, on the underline basis because there was some impact of carbon credit and debit due to which the real numbers are not so visible. If you look at it purely on the underline basis Q2 is much better than Q1 but as you are saying Q2 has had negative EBITDA but in Q3 we expect that we will be on a positive EBITDA, in fact, September was positive EBITDA and we are expecting Q3 to be at positive EBITDA.

Q: We have seen a continued streak of price hikes in the last few days. Do you think that it will continue, if yes, then what is your outlook on steel prices?

A: Steel prices depend on two issues (i) domestic demand and domestic sentiment for India and in Europe on local demand and (ii) international prices. If you have a look then the international prices are very strong for steel because China’s recovery has been much better than most people expected. If you look at Hot Rolled Coli prices which were at maybe $530-540 few months some two months ago has gone up to $570-580 in South East Asia and in Europe, it has gone up to about $600. So obviously things are picking up. Secondly, iron ore prices have been very strong. It is not very often that iron ore prices are higher than coal prices, this year iron ore prices have been gone to $125 and coking coal prices has softened only because of the geopolitical issues between China and Australia. However, the fundamentals of demand are still quite strong. In the case of India, we are seeing a lot of activity come back. Earlier, we have seen the rural activity, which was better in June and July but now factories are coming back, MSMEs are coming back and construction sites are coming back because a lot of labour is back. And in Europe, the automotive industry is still going quite strong. So in multiple ways, we are seeing that the local issues are helping steel prices as well as international markets.

Q: With the results, the company has also announced that it has initiated talks with SSAB for disinvestment of the Netherlands business. Can you please tell us the timelines for the deal and what kind of conversation is going on this point?

A: We have to do two-three things in this

The third thing that was very important in Thyssenkrupp transaction, which was the competitive commission clearances, hopefully, this time there should not be so much trouble because SSAB and Tata Steel, Netherlands don’t have the overlaps that Thyssenkrupp and Tata Steel, Netherlands had. So, we don’t have the issues that we faced at that time with the auto industry and packaging industry. We are hoping that will also not be an issue like we had last time.

Q: What is an update on Port Talbot plant and what kind of conversations are going on with the UK government and what is the expected timeline by which things will revive there?

A: There had been a lot of discussion with the UK government in the last few months and we have given a couple of proposals, which is being examined at their end using independent consultants and things like that. So, we have done whatsoever we can do there operationally. We are running operations as tightly as possible and you know it well that we have also made investments there in the last 10-15 years and we have supported the business quite a bit. This is why, for the future, we are hoping and expecting that the UK government will provide some support because we need that support from the government for long-term sustainability. The cost of operating in the UK is also high in many ways because of the electricity charges and things like that. And, the Port Talbot is a very important part of the UK manufacturing value chain, so the government should also be keen to keep it active and alive. That’s why; we had a request to the government that we have not gone to it in the past for support despite having many challenges. It is a time to step forward and give us some support and I think that can help this business be sustainable in the long run.

Q: What kind of updates you will provide on future expansion plans of the company particularly in the domestic market?

A: For this year, we have gone slow on Kalinganagar. Prior to the pandemic, we have said that we will focus on the cold rolling mill and pellet plant. The pallet plant will help us in reducing the cost and cold rolling mill will add value. And after, we take the care of these projects and these projects are close to completion then we will focus on the blast furnace, which will add to the volume. We will review this in the second half of the year with the board and then take a call on what should be the plan for next year.