There is a slowdown in order inflow since January and it can’t be said that election is a reason for it or something else, said M S Unnikrishnan of Thermax Ltd 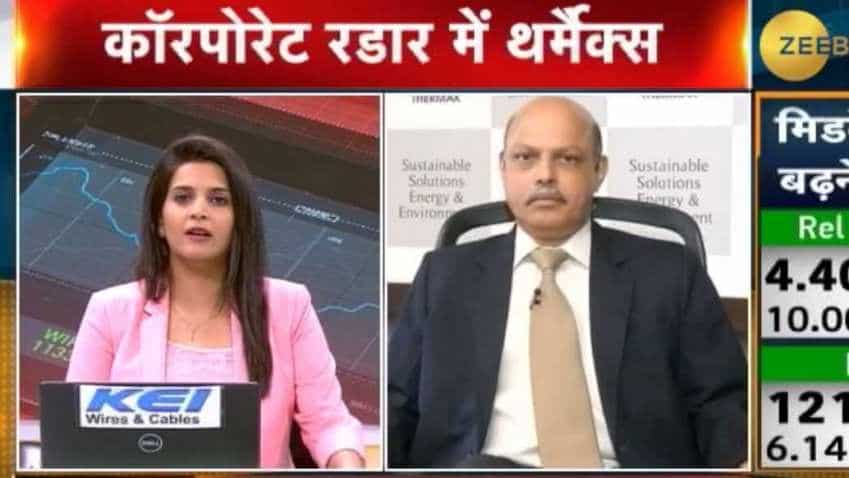 Banks will be lending after looking at the balance sheet of the company and chances of recovery from the project, said M S Unnikrishnan, Thermax Ltd. Image source: Zee Business
Written By: ZeeBiz WebTeam

Election is going to the biggest trigger for the corporate world including infra companies at present. Tell us about your expectations from the announcements and kind of order inflow that you may get from it?
There is a slowdown in order inflow since January and it can’t be said that election is a reason for it or something else. There is a reduction in finalisation of the orders from private as well as public sector as it used to be in the 1st to 3rd quarter. On the contrary, the sentiments have improved in the market in the last 45 days or so but has failed in translating into order finalisation area.

Earlier, you have said that the issues at DISCOMS may compel small industries to set their own captive power plants. So, have you seen any increase in demand in the area, if yes, then update us on the current situation?
Enquiries are coming from different sectors, but they haven’t been finalised yet. In fact, the sectors that never demanded power in the past are also looking for it. For instance, the paper industry who are setting new recycling plants in India to support the packaging industry that is expanding itself with the e-commerce companies. Earlier, they were using power supplied from the electricity board to run their plants.

Let us know about the existing liquidity situation and is there any improvement in it? Also, talk about the receivables advance repayments situation?
There is an improvement in the banking sector because several banks, who were not present in the lending list, are out of the ban. I think, 7-8 banks have returned to normalcy and will be able to lend now. But, there is a thing in which the banks will not be lending without looking at the project report, viability and marketing capabilities as well as the collateral capabilities of the investor.

The banks will be lending after looking at the balance sheet of the company and chances of recovery from the project, i.e. possibilities repayment of the loan. Thus, such companies will get good loans in future. So, the availability of liquidity is not a problem for good projects. However, the bank will not lend to anyone and everyone who approaches it for the purpose.

Inform us about the production and capacity utilisation of the new facilities at Dahej and Sri City?
We have almost 70% capacity utilisation at the chemical factory of Dahej and it will be moving upward to almost 100% utilisation by the next quarter. In addition, we have also cleared the phase-II expansion plan of Dahej facility. Thus, the capacity addition program is being executed and will take the current installed capacity of 12000 metric cubes per annum to 22000 by September. Thus, we will be using 90-95 per cent capacity of the existing facility by the end of quarter 1. That’s about the Dahej Chemical Factory.

Sri City facility was commissioned in recent past, but I can inform you that it is a robotic oriented plant and it is producing well. Its revenues are being recognised at our end. We have also started dispatching products from the facility. In fact, a percentage of orders are being diverted to the facility. It has the capacity to produce around 400 machines and I feel that we will be able to produce at least 300 machines in the next 6-8 months.

Provide details of the order book and how will you end FY19? What is your outlook on margin?
We have grown well in terms of revenue in the last three-quarters of FY19 and it will continue in the fourth quarter as well. Profits of the fourth quarter will be naturally better than the previous three quarters. So, put together, Thermax will be posting a decent result this year. But, when it comes order booking then it is not that good in the quarter. I think the slowdown has arrived in the market. That is the current situation on order booking for FY19.