Dr Reddy’s has launched 20 products so far in this financial year, says Saumen Chakraborty, Chief Financial Officer, Dr Reddy's Laboratories. During a chat with Swati Khandelwal, Zee Business, Chakraborty said, the trial of sputnik about to start and we have around 100 patients in Phase-II and 1,500 in phase-III. 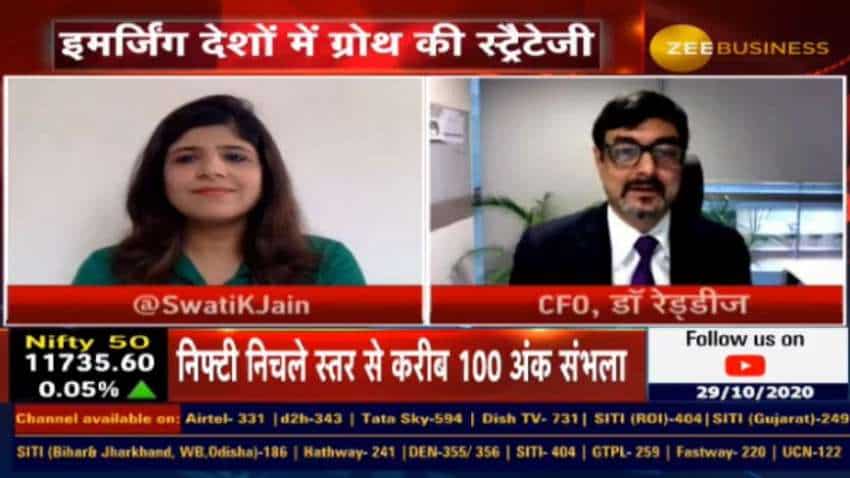 Dr Reddy’s has launched 20 products so far in this financial year, says Saumen Chakraborty, Chief Financial Officer, Dr Reddy's Laboratories. During a chat with Swati Khandelwal, Zee Business, Chakraborty said, the trial of sputnik about to start and we have around 100 patients in Phase-II and 1,500 in phase-III. Edited Excerpts:

Q: Numbers have been quite good in the September quarter. Can you tell us the area that has the largest contribution in this quarter, particularly?

A: If a comparison between Q2FY20 and Q2FY21 is made then it is not a like-to-like comparison because in Q2FY20 our out-licensing income from the product was above Rs 700 crore. If it is adjusted then our revenue growth is almost 20% and the reported growth is just 2%. So, 20% is quite impressive and all the geographies and businesses have contributed to it. Probably, we have reported the highest-ever sales in this quarter and every business and geography has performed well this time. Otherwise, it happens that some geography does well but it doesn’t happen in the other. But this time, every geography has done well and there are the separate reason behind it like a new product has been launched in North America and its numbers are quite good. We, earlier, estimated that last year 20 products were launched and 25 will be launched this time. If you have a look then we 17 products have been launched in the first half, itself, and 2-3 products were launched October, which turns up to be 20. Many other products have to been launched, which means more than 25 products will be launched this year and it may cross the mark of 30 products.

Q: If we have a look at the gross margins than they were slightly lower this time. Is there any specific reason was it due to an increase in operational expenses?

A: If you have a look at the Rs 700 crore, then when the income comes then the cost turns negligible for it. So everything moves to margin due to which margins increases. So, the margin last year was above the normal range and if a like-to-like comparison is made between the two then this year our margin has increased, when compared to the last year. But, we are not emphasizing on it because margin keeps fluctuating quarter-to-quarter and many things are responsible for this fluctuation. Our margin for this quarter is at a range and the fluctuation is within a range, which depends on different factors like forex, product mix and business segment mix among others. You have seen the margin and EBITDA and we have kept an aspirational target of posting 25% EBITDA and we have crossed it, therefore this 25% is good. Even in RoC, we had an aspirational target of 25% and we are about to reach that level.

Q: What is the timelines for Sputnik, i.e. by when will you start the trails and how much more time will be required to take the approval? Also, tell us about the kind of expenses/ cost you will incur for it?

A: Trail is about to start and we have around 100 patients under phase-II and about 1,500 in phase-III. Phase-II is a matter of a few weeks and it ends soon, while phase-III take a few months. The overall cost becomes a part of our total R&D budget and we have spent more on overall R&D in this quarter as compared to previous quarter on absolute terms but the percentage of sales because our sales have been a good one. So in the percentage of sales, the R&D has been slightly low as compared to the last quarter, which was 9% in and it has been 8.5% in this quarter. So, we will observe the cost of trials through the R&D budget.

Q: If we talk about the next quarter or till the end of the year, how many new products will be launched by the company?

A: We have a global business, so there is a global portfolio. Normally, the market tracks US NDA filing. And, two products fall under the NDA category, while 94 products are pending for approval of which around 50 are Para-IV, in that, we believe that we may get first to file opportunity in 26. So, this is the total quantity & quality of the US NDA. Apart from this, there is DMF for API. If we have a look at the global number of DMF or products that we file and make registrations for other countries is going on. So, many patients are ready to be filed.

Q: There was a cyberattack concern in the recent past and you also released a press release saying you are working with international agencies on it. Can you tell us if there is some financial implication or material impact?

A: As per the investigation that we have done so far, there is no evidence of data breach prima facie. And if there will be some evidence then we will have to report it immediately. As far as restoration is concerned then many things have been restored and the process is on.