The Central Electricity Regulatory Commission (CERC) has approved the claims of Rs 2,000 crore raised by solar power developers on the impact of the introduction of the Goods and Services Tax (GST) on their capital cost. 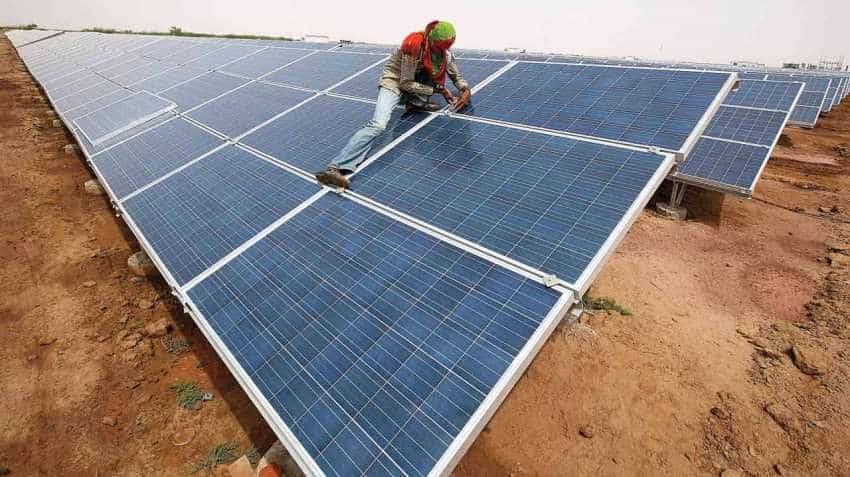 This one-time payment will be made by the electricity distribution companies, or discoms. Image source: Reuters
Written By: DNA Money Correspondent
RELATED NEWS

Solar power developers would now get some relief by way of impact of Goods & Services Tax (GST) on projects for the period when the new taxation law was implemented.

The Central Electricity Regulatory Commission (CERC) has approved the claims of Rs 2,000 crore raised by solar power developers on the impact of the introduction of the Goods and Services Tax (GST) on their capital cost.

This one-time payment will be made by the electricity distribution companies, or discoms. The order by CERC came in after several petitions were filed with the regulator due to ‘change in law’ that came in on implementation of GST.

However, the projects covered under the relief are only those projects that were commissioned after July 1, 2017.

Sabyasachi Majumdar, group head & senior vice-president (corporate ratings) Icra, in a statement said, “This is a positive development for the solar power developers. However, the timely release of allowed compensation by the respective state-owned distribution utilities (being the main off-takers) remains crucial…Considering 75% of the capacity commissioned during this period to be under the competitive bidding regime awarded prior to July 2017 (that is prior to introduction of GST), the one-time compensation towards GST impact to be paid by discoms to solar power developers is estimated at about Rs 2,000 crore on all-India level.”

In India, capacity of 10.9 gigawatt solar power has been commissioned between July 2017 and September 2018, with most of the projects being awarded prior to July 2017.
As per the CERC order, the claims related to operation & maintenance and its impact of GST on expenditure were not allowed.

The CERC has also stated that the developers must exhibit clear and one to one correlation between the projects, the supply of goods or services and the invoices raised by the supplier of goods and services backed by auditor certificate.

These claims will have to be paid within 60 days of issuance of the order, which means the payment will have to be done by December 8. CERC’s order had come on October 9.

In case of delay in the payment, late payment surcharge as provided in the power purchase agreements will have to be paid by the discoms.

Introduction of GST regime had a negative impact on solar power projects due to increase in capital cost arising from higher tax rate applicable under GST, given that the solar power sector has been availing exemptions and concession rates on excise duty, customs duty and Value Added Tax for procurement of PV modules, mounting structures and electrical equipment, etc. The GST Council has approved 5% rate for solar PV generating systems, as against the prevailing regime of exemption from excise duty and customs duty as well as exemption or concession VAT rates across various states.

Meanwhile, on the bidding front, solar power developers continue to be reluctant in bidding for the new tenders that the government is coming out with.

Apart from that, developers are also facing liquidity crunch for arranging funds even for existing projects in hand.

This story first appeared in DNA Money: Solar firms to get Rs 2,000 cr towards GST impact