SoftBank Vision Fund is now the largest shareholder in Flipkart after its latest round of funding. 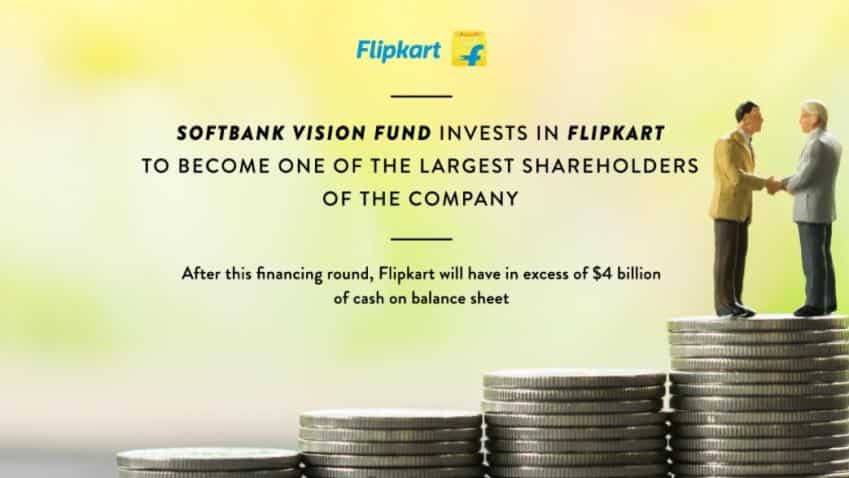 After this financing round, Flipkart will have in excess of $4 billion of cash on its balance sheet. Image Source: Flipkart Stories website
Written By: ZeeBiz WebTeam
RELATED NEWS

SoftBank Vision Fund is now one of the largest shareholders in Flipkart with its investment of $2.4 billion. Bloomberg, quoting sources said that the investment now values Flipkart at $11.6 billion.

“Flipkart Group, India’s leading e-commerce marketplace, has announced an investment — a mix of primary and secondary capital — from SoftBank Vision Fund, the world’s largest technology-focused investment fund. This is the biggest ever private investment in an Indian technology company, and will make the Vision Fund one of the largest shareholders in Flipkart,” it said.

The investment was a part of a previously announced financing round in which the company said it raised $1.4 billion from investors like Tencent, eBay and Microsoft. The company’s balance sheet will now reflect $4 billion in cash.

“After this financing round, Flipkart will have in excess of $4 billion of cash on its balance sheet,” the company said.

“India is a land of vast opportunity. We want to support innovative companies that are clear winners in India because they are best positioned to leverage technology and help people lead better lives. As the pioneers in Indian e-commerce, Flipkart is doing that every day,” said Masayoshi Son, Founder and Chairman & CEO of SoftBank Group Corp., who previously publicly announced his long-term commitment to investing in India.

“This is a monumental deal for Flipkart and India. We’re excited to welcome the Vision Fund as a long-term partner as we continue to build our business with a focus on serving the needs of all Indians, and driving the next phase of technology adoption in India,” said Binny Bansal and Sachin Bansal, Co-Founders of Flipkart.