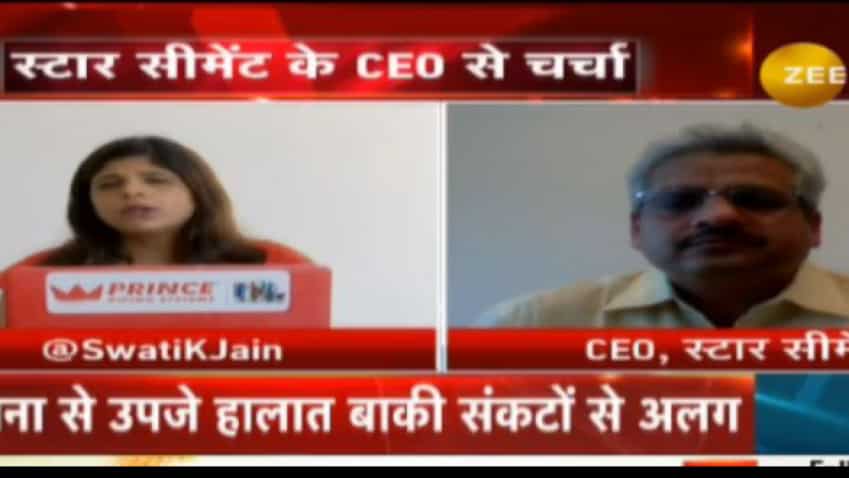 "The revenue was largely flat in the second quarter and there was revenue growth of around 5-6%. Volume growth is largely volume-driven," Sanjay Kumar Gupta said
Written By: Jitesh Kumar Jha
Edited By: ZeeBiz WebTeam
RELATED NEWS

Q: Star Cements revenue has gone up but profits have gone down. Where do you see the pressure coming from and by when recovery is expected there?

A: The revenue was largely flat in the second quarter and there was revenue growth of around 5-6%. Volume growth is largely volume-driven. Price correction happens in the second quarter and it has occurred in North East and East, the prices have corrected and there was a fall of around Rs 10-15 in North East and around Rs 20 in the East. Despite that because of the volume, the overall top-line growth has been a good one. EBITDA margins were largely flattish but there has been an improvement in overall EBITDA and we have reported an EBITDA margin of around Rs 1,400 crore. But going forward good demand for cement is visible as if just October month is taken under consideration than cement demand has grown in double digits and we have seen double-digit growth in North-East even almost a double-digit growth in cement demand was seen in East region in the month. So, the second half looks better, as far as demand is concerned.

Q: You enjoy the highest market share in the North-East region. What kind of expansion plans do you have in the region and do you have any plans to increase your presence beyond East and North East, if yes, what is your outlook in terms of CapEx?

A: Largely, we have our focus in the North-East and East. And going ahead we will keep ourselves focused in this region. Our 2 million-tonnes grinding plant is coming up in Siliguri will be commissioned in the first week of December. Commissioning of the plant will increase our capacity by 2-million-tonnes. Going forward, we are establishing a 2-million-tonnes clinker plant in the North East region in the next 2-3 years. Besides, we will also expand our grinding facility of Guwahati. Overall, we have a target to have a capacity of around 10-million-tonnes in East and North East in the next five year. There are possibilities to add capacity in the East and I feel that around 6-8-million-tonnes capacity addition will happen in the next 2-3 years. But I feel that the demand has always been better in the East. If you have a look at the total of the first half then demand had grown by almost 10 in the North East, while it has been of around 7-8% in the East. So, I feel that in the full year there will be a good demand in both, East and North East regions.

A: Our company is a net cash company, so, we have almost Rs 500 crore of cash in books. Going forward in the immediate next 2-3 years, we have a plan of 2-million-tonnes clinker, about one million-ton additional grinding and one WHR plan program. So, we have a total CapEx plan of around Rs 1,400 crore. As I have said that the company has cash of around Rs 500 crore at present and we are generating n EBITDA of around Rs 450-500 crore in a year. This is why, I feel that in the next 2-3 years, there will be no need to raise any additional funds and we will be able to complete it through internal accruals.

Q: Cement prices are going up at a constant pace. So, what is your outlook on cement prices and what is the trend? Also, is there any chance of price rise in the recent future or it will remain at the same levels?

A: Slight stability has been seen in the prices in October. So, I feel that as demand will pick up then a slight price uptick can be seen. Even the government in the recent past has increased the allocation for Pradhan Mantri Awas Yojana and it seems that it will provide a good demand push in the rural sector. Going forward, a slight price pick increase will be seen in the second half of the year.

Vir Das: Stand-up takes time, so when I act it must be an interesting role