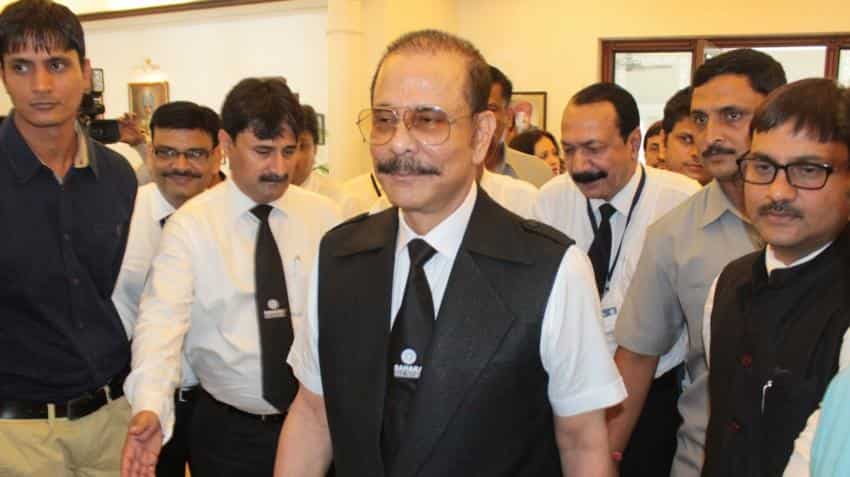 The Supreme Court (SC) has extended the parole of Sahara chief Subrata Roy till September 16, 2016 after it deposited Rs 306 crore on Wednesday. Sahara will have to deposit another Rs 300 crore by September 16, according to a Zee Business report.

Asking Sahara to deposit Rs 300 crore, a bench of Chief Justice T S Thakur, Justice Anil R Dave and Justice A K Sikri gave the Sahara chief time till September 15 to deposit the money, orally observing that failing this he will be sent back to the Tihar jail here.

"It goes without saying that you will go back (to jail) if you don`t deposit Rs 300 crore," Chief Justice Thakur observed as Kapil Sibal, appearing for Roy, urged the apex court not to say in its order that default in depositing Rs 300 crore would result in the return journey to jail.

Besides directing for the deposit of Rs 300 crore, the bench said that Sahara would give a list of its immovable properties to Securities Exchange Board of India that it wants to sell.

The court rejected Roy's plea to be permitted to sell Sahara's property on its own to raise money to return investors' deposits collected in 2008 and 2009 through Optionally Fully Convertible Debentures (OFCDs).

"We will not allow. Stop playing these games with us. We are tired of it," the Chief Justice observed as Sibal urged the court: "Please allow me to sell the properties, (and tell market regulator SEBI) don't go ahead with the e-auction of his properties."

Seeking a free hand for Sahara to sell its assets instead of market regulator SEBI, Sibal told the bench that he (Subrata Roy) would get better buyers than what market regulator was getting through e-auctioning.

The bench was told that if permitted a free hand, Sahara would sell properties at 110% of the prevailing circle rates.

Referring to one of the assets about which Sibal said there was a buyer willing to pay much more than the highest prices that SEBI got through e-auctioning, the bench told him to direct that buyer to approach the market regulator.

Telling the court that his business has improved ever since he was set free on parole on May 6, Subrata Roy told the bench, "I have to give confidence in the market that now I am out."

He said this while assuring the court that if allowed to act on his own he would bring the money within one and a half years.

Sibal offered to file an undertaking to that affect.

Senior counsel Arvind Datar, appearing for SEBI, drew the bench`s attention towards Sahara group`s Aamby Valley property which alone was worth Rs 40,000 crore, to which Sibal retorted: "Why do you want me to sell my hen laying golden eggs."

The bench reminded Sibal of the group`s earlier claim that its worth was Rs 1,87,000 crore. "You know how many zeros are there," the Chief Justice asked Sibal.

Sibal told the court that whatever cash that the SEBI was getting over and above Rs 5,000 crore should be kept as margin money to get a bank guarantee of Rs 5,000 crore which it is negotiating with Canara Bank.

The apex court on March 26, 2014, had said that the Sahara Group will deposit Rs 10,000 crore as part payment of the investors` Rs 24,000 crore that its two companies -- SIRECL and SHICL -- collected through OFCD as a condition for the release of Roy and two other directors Ravi Shankar Dubey and Ashok Roy Choudhary.

Dubey was ordered to be released on parole on July 11.

Subrata Roy, his son-in-law Ashok Roy Choudhary and Dubey, who are now on parole, were sent to judicial custody to Tihar jail on March 4, 2014, for the failure of Sahara group`s two companies -- Sahara India Real Estate Corporation (SIRECL) and Sahara Housing Investment Corporation Ltd. (SHICL) -- to comply with the court`s August 31, 2012, order.

The top court, by its August 31, 2012, order had directed the SIRECL and SHICL to return the investors` Rs 17,600 crore with 15 per cent interest that two entities had collected through OFCDs.