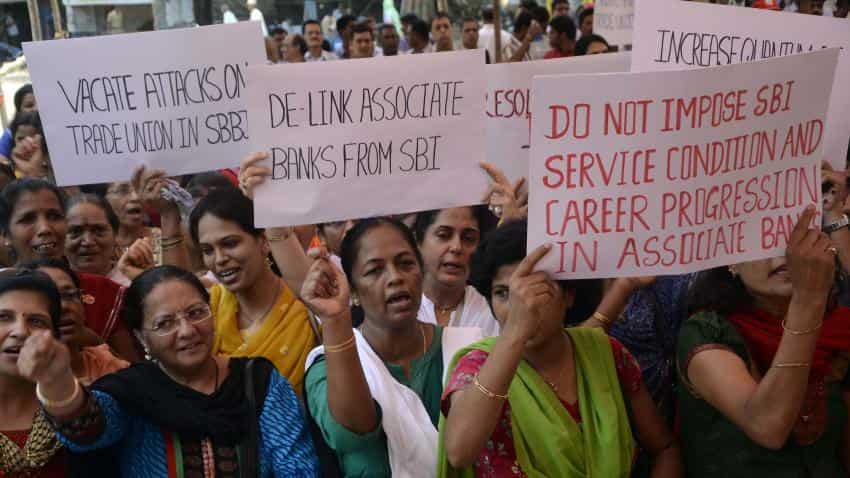 The employees of associate banks of the State Bank of India stage a demonstration against imposition of SBI service conditions on them at Azad Maidan in Mumbai, on June 4, 2015. Image Source: IANS

The All India Bank Employees' Association (AIBEA), in a press release dated May 13, said that the executive committee of the State Sector Bank Employees Association (SSBEA) which comprises of the unions of the aforementioned five banks, was held in Chennai on Friday under its guidance.

According to the release, the banks decided that they will oppose all the attempts made by SBI to merge the five banks with itself. Rather, they called for all the five banks to be merged into one "effective bank of substantial size to ensure better growth of the Bank."

The representatives of the five banks also said that any attempts by the SBI management to unilaterally impose adverse service conditions on the employees will be strongly opposed.

"The meeting regretted that the managements of the associate banks are refusing to settle genuine demands like revision in staff housing limits which has been improved in all other banks except the associate banks, refusal to extend the government guidelines on compassionate ground appointments, etc," AIBEA said.

Apart from the two strikes, SSBEA, will hold demonstrations, mass meetings, rallies, processions, on May 27, June 10, June 21, June 29 and Jully 10, the release said.

SBI customers can avail these contactless services, just have to give a phone call

Rs 251 EMI! Get SBI pre-approved two-wheeler loan in just a few clicks with SBI YONO: Know features, eligibility and how to apply