SBI customer? First-of-its-kind move! Your State Bank of India becomes a pioneer by taking this big step - Check how you will benefit

SBI decided to exempt saving bank account holders and borrowers having cash credit or overdraft loans up to Rs 1 lakh from the linkage of repo rate. 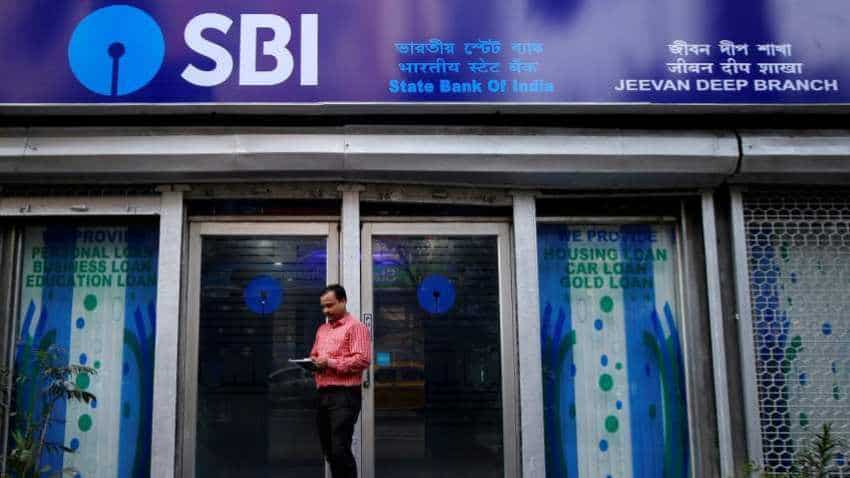 In a very surprising event, the largest lender State Bank of India (SBI) placed its first move to accept the external benchmark method prescribed by Reserve Bank of India (RBI) when it came to disbursing loans. Interestingly, SBI took another bold decision by not only linking its short term loan interest rate but also its savings deposit account with policy repo rate which currently stands at 6.25%. The reason behind such development is to insulate the small deposit holders and small borrowers from the movement of external benchmarks, and is why SBI decided to exempt saving bank account holders and borrowers having cash credit or overdraft loans up to Rs 1 lakh from the linkage of repo rate. Well with this, SBI does become the first bank to follow the pattern inked by RBI governor Shaktikanta Das in his December 2018 policy, when he finally cut down repo rate by 25 basis points and asked every bank to no more decide their lending rate as per the benchmark MCLR but instead link it with four types of external benchmarks.

Interestingly, SBI has taken its bet on the policy repo rate.

On SBI’s move, M B Mahesh, Nischint Chawathe, Dipanjan Ghosh and Shrey Singh analysts at Kotak Institutional Equities said, “ SBI responded to the regulator’s desire for products which have faster transmission of rates by selectively introducing repo linked savings and cash credit products. Prima-facie, a variable interest rate is a positive outcome as it lowers NIM volatility as banks have one less variable to worry about, but the impact of this move would be well understood once we establish savings behavior during various rate cycles and reaction from competitors.”

But how does exactly, a saver and borrower benefit from new SBI interest rates.

If your savings is upto Rs 1 lakh in SBI, then your deposits are not linked with external benchmark. It would be above Rs 1 lakh saving deposits which will see their interest rate change as per policy repo rate.

SBI has linked savings bank deposits with balances above Rs 1 lakh to repo rate withthe current effective rate being 3.50% per annum. This would be 2.75% lower from the policy repo rate of 6.25%. Notably, 3.50% interest rate remains unchanged currently.

So let’s suppose, if RBI decides to cut policy repo rate by another 25 basis points in upcoming April 2019 policy, then savings bank deposit above Rs 1 lakh will also witnessa decline in their interest rate by the same fraction. Hence, then the interest rate would be 3.25%. But if RBI hikes repo rate by 25 bps, then the savings deposit interest rate will also see a rise and would then become 3.75%.

In general terms, when there is cut in repo rate it is the borrowers who benefit, while in hike the savers see good news.

Analysts at Kotak said, “Our report on liability customer behavior suggests that the customers are not as rate sensitive as thought to be. Public banks have losing share but gradually despite higher interest rate offered by new private banks. There could be some impact even on SBI as its government deposits could see volatile movement. Rural and semi-urban markets have seen a rise in SA share irrespective of interest rates. The market condition is probably forcing banks to maintain a status quo on product offerings. A variable interest rate does not necessarily mean a negative outcome for the customer as well.” 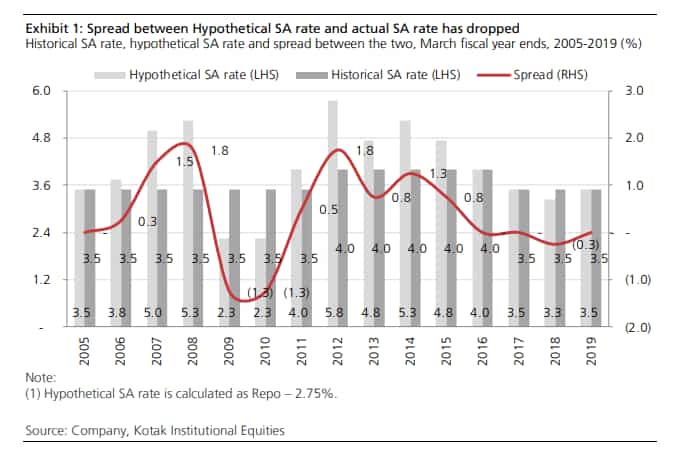 Unlike savers, borrowers opting for short term loan will directly benefit from policy repo rate cut ahead. SBI has now kept all cash credit accounts and overdrafts with limits above Rs 1 lakh linked with repo rate 6.25% with a spread of 2.25%. This would mean now borrowers who seek such loans will see a 8.50% interest rate.

SBI says, “The Risk premiums over and above this floor rate of 8.50 % would be based on the risk profile of the borrower, as is the current practice.”

Thereby, linking small ticket loans above Rs 1 lakh with ethe xternal benchmark is a massive opportunity for borrowers, as here the repo rate is much lower than compared to MCLR. Therefore, going ahead, if RBI cuts repo rate by another 25 basis points, then cash credit and overdraft above Rs 1 lakh, will also see interest rate going down by the same portion and hence would become 8.25% then. If RBI hikes rate, then it would be vice versa.

In Kotak’s view, a move towards market benchmark, even if it means to 25% of borrowers, is still a painful transition as it would be a third change in the past decade (PLR/base rate/MCLR). The relative impact is not too high and manageable. The banks and borrowers are currently facing limited choice as there is a strong view to introduce rates that are transparent and formats that can be quickly transmitted when there is a regulatory change. 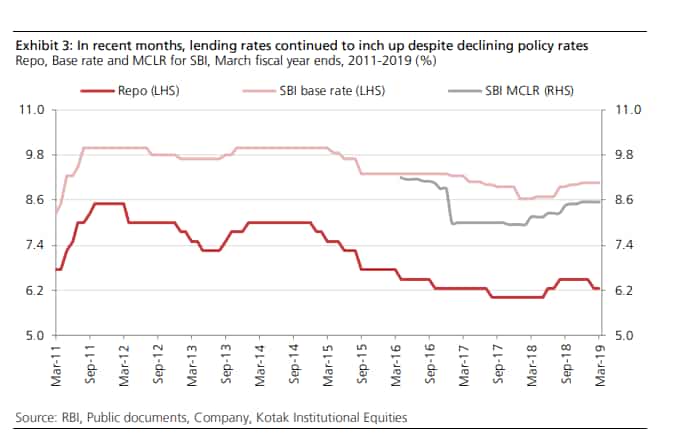 According to Kotak, the challenge is primarily on the deposit side as compared to loans. So far, banks have been hesitant to introduce these products for fear of losing market share on deposits during declining interest rates or its impact on earnings. SBI had met with limited success when it had offered variable interest rates on term deposits in the past. So, we would wait for two more years to understand the acceptance of this product.

One can expect other banks to follow the same method of SBI, however, few surprises can be awaited. Also, RBI’s guidelines are strictly that, banks have to link their lending rates with the above mentioned benchmarks by end of March 2019, as the new benchmark must be in effect from April 01, 2019. Hence, other banks especially many PSBs can follow the suit.

Although it would be interesting to know, where other banks will also link their savings bank deposit account with external benchmark like SBI.