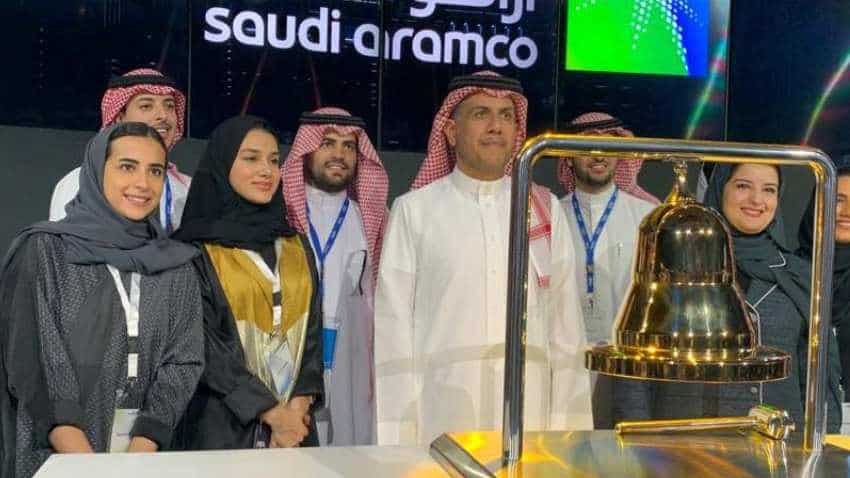 Last week, the company had raised $25.6 billion in its IPO, giving it a market value of around $1.7 trillion.
Written By: ZeeBiz WebTeam
Edited By: Harish Dugh
RELATED NEWS

Saudi Aramco has become world's biggest listed company beating tech giant Apple after its shares surged the maximum permitted 10% above their initial public offering (IPO) price on its Riyadh stock market debut today, closing in on the $2 trillion valuation long sought by Saudi Crown Prince Mohammed bin Salman. This has taken company's valuation to $1.88 trillion which is even more than Apple ($1.2 trillion). The shares leapt to 35.2 riyal ($9.39) each, up from the IPO price of 32 riyals and at the daily limit of price moves allowed by the Tadawul exchange.

Last week, the company had raised $25.6 billion in its IPO, giving it a market  value of around $1.7 trillion. Saudi Arabia relied on mainly domestic and regional investors to buy Aramco shares after lukewarm interest from abroad. The $25.6 billion of proceeds beat Chinese tech firm Alibaba's $25 billion listing in 2014.

"This is a successful IPO and the Aramco listing will add depth to the local market by providing exposure to a vital sector of Saudi Arabia`s economy," Bassel Khatoun, managing director, frontier and MENA at Franklin Templeton Emerging Markets Equity told Reuters.

The Aramco shares began trading half an hour after the market opened. This was after the Saudi bourse allowed extra time for the "opening auction" period when investors place their bids, in anticipation of high levels of activity. Earlier this month, Tadawul introduced an index weighting cap of 15% to address concerns about the potential impact of Aramco`s flotation and limit the index`s correlation to the oil price.

Aramco`s listing also comes nearly four years after Prince Mohammed unveiled his plan to sell a portion of the world`s most profitable company to raise funds to help diversify the kingdom away from oil. If the surge continues on Thursday, Aramco will exceed the $2 trillion valuation coveted by Prince Mohammed. The company is expected to be included in the MSCI emerging markets index on December 17.