The market share of Apple and Samsung saw a decline as sales globally went down. At the same time Chinese-based smartphone firms such as Huawei, Oppo and Vivo continued to put pressure on these companies. 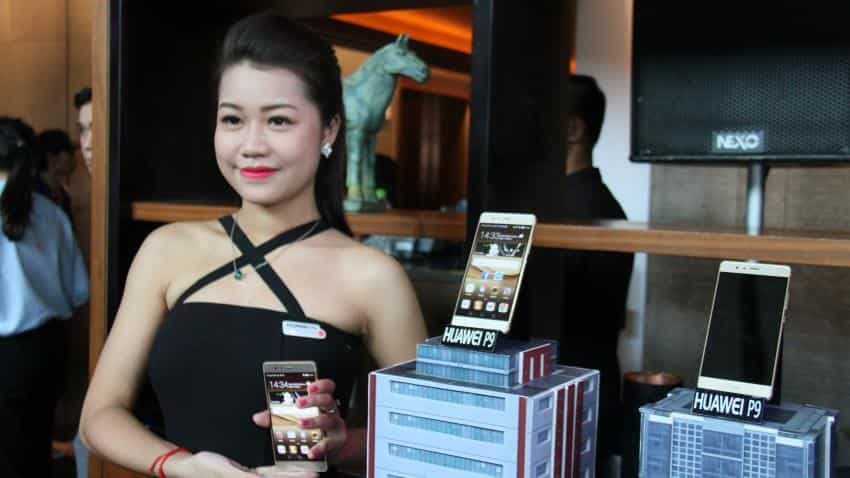 A model showcases a Huawei P9 smartphone which is one of the highest selling smartphones globally. Photo: IANS
Written By: ZeeBiz WebTeam
RELATED NEWS

Huawei has inched closer to Samsung and Apple in Q1 2017 in terms of the global smartphone sales. The Chinese-based smartphone maker saw its market share inch to 9% in Q1 2017 from 8.3% in the same quarter last year, according to a Gartner report.

Huawei edged closer to Apple with smartphone sales amounting to 34 million units in the first quarter of 2017. Despite its P9 and P9 Plus being available for more than a year now, both smartphones continued to sell well, positioning Huawei as a dominant brand in the consumer market.

Both Samsung and Apple saw a decline in market share during the quarter, but however managed to stay at No 1 and No 2 spot, respectively. While Samsung's market share worldwide slipped by 3.1% to 20.7% in Q1 2017.

Worldwide Smartphone Sales to End Users by Vendor in 1Q17 (Thousands of Units)
Source: Gartner (May 2017)

This shows that there were very few takes from the Samsung Galaxy S8 and S8 Plus launched recently after the Galaxy Note 7 issue. The company sold 78.6 million units in Q1 2017 in comparison to 81.1 million units sold in the same quarter last year.

“Although Samsung announced that pre-orders for the Galaxy S8 and S8 Plus are up 30% year over year, the absence of an alternative to Note 7 and the fierce competition in the basic smartphone segment are leading Samsung to continuously lose market share,” said Anshul Gupta, research director at Gartner.

“Sales of iPhones were flat, which led to a drop in market share year over year. Similar to Samsung, Apple is increasingly facing fierce competition from Chinese brands Oppo and Vivo, among others, and its performance in China is under attack,” said Gupta.

While Huawei has now steadily held onto the third spot in the worldwide ranking of smartphone vendors, it too is coming under increasing pressure from other Chinese smartphone brands such as Oppo and Vivo.

Oppo is continuing to catch up with Huawei. With a 94.6% increase in worldwide smartphone sales in the first quarter of 2017, Oppo achieved the best performance of the quarter and retained the No. 1 position in China.

"Oppo continued to rally sales through a large network of brick-and-mortar retailers, beating market incumbents such as Samsung and Huawei," said Mr. Gupta. Oppo's strategy — centered on the camera, fast charging and offline retail — has helped it grow smartphone sales in the international market.

Mobile phone buyers are spending more to get a better phone, resulting in the rise in average selling prices of types of phone.

The shift in buyer preference is positively affecting Chinese manufacturers such as Huawei, Oppo and Vivo in their strategy to build desirable features at affordable prices. Their combined market share in the first quarter of 2017 accounted for 24%, up 7% points year on year.