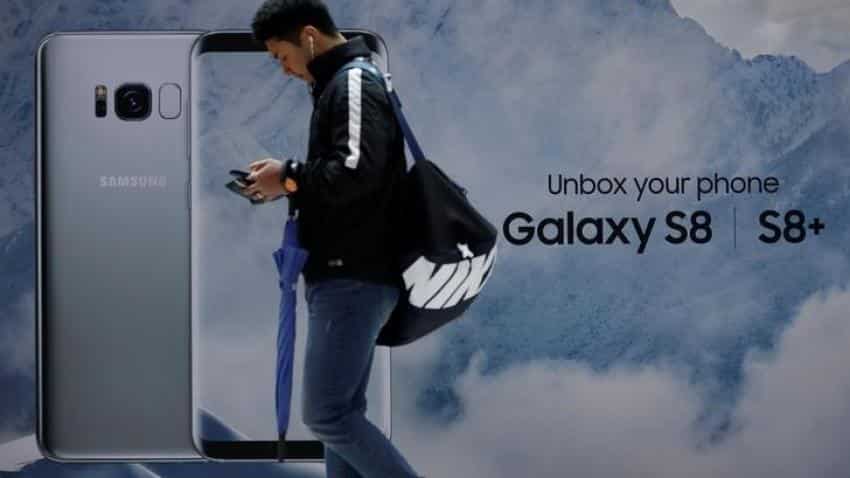 A man using his mobile phone walks past an advertisement promoting a Samsung Electronics'' Galaxy S8 smartphone at a shop in Seoul. Image Source: Reuters
Written By: Reuters
RELATED NEWS

Samsung Electronics Co Ltd forecast on Friday its best quarterly profit in more than three years in the January-March period, beating expectations and putting it on track for record annual earnings on the back of a memory chip super-cycle.

Samsung shares touched a record high of 2.134 million won in late March on expectations of record annual profit in 2017, as the South Korean tech giant bounced back from the embarrassing withdrawal of its Note 7 devices due to combustible batteries.

Investors and analysts expect Samsung to report its best-ever quarterly profit in April-June, with the Galaxy S8 smartphone hitting the market on April 21 in Samsung`s first premium device launch since the Note 7`s withdrawal in October.

Some researchers forecast the S8, which sports the largest screens for Samsung high-end smartphones to date, to set a new first-year sales record.

"Samsung will look to recover market share they lost last year and pump up volumes even if they have to spend more to do so," IBK`s Kim said.

All this is happening amid management upheaval at South Korea`s biggest family-run conglomerate, with third-generation leader Lee embroiled in a scandal that has already led to Park`s removal from office for allegedly receiving bribes.

Lee was arrested in February over his alleged role in a corruption scandal. He denies any wrongdoing.

While Samsung will not provide detailed earnings results until the end of April, analysts tipped its chip division to earn a record 5.8 trillion won in January-March and propel the firm to its best overall operating profit since the third quarter of 2013.

Favourable memory market conditions will likely persist throughout 2017 due to diminishing production gains on investments and careful capacity management among chipmakers.

Growing demand for more firepower from devices such as smartphones and servers have also helped push up margins for Samsung and its rivals in recent quarters.

Samsung shares were down 1.2 % in early Friday trade, underperforming a 0.2 % fall for the broader market on profit-taking pressures.

The stock rose 14 % in January-March, its strongest gain since the first quarter of 2012.