The South Korean tech giant unveiled new models in its flagship QLED TV series, the mid-range UHD and Make for India "Concert" TV series here. The 2018 QLED TV comes with "Ambient Mode" that lets users convert their devices into a canvas and also act as a window to the world. 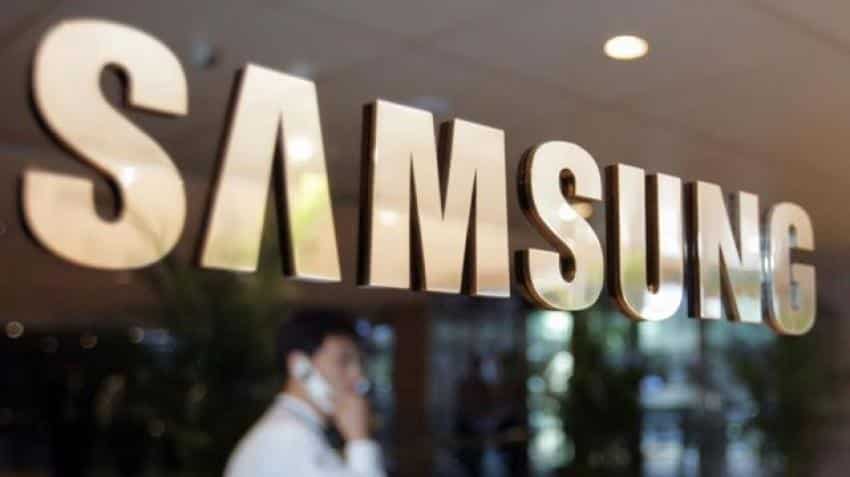 The TV will also automatically show users the weather to reflect whether it is sunny or rainy. Image source: Reuters
Written By: IANS
RELATED NEWS

Bringing its new 2018 line-up of TVs including the premium QLED range to India, market leader Samsung on Thursday said the company is eyeing to grab more than half of the premium TV segment in the country in the next four-five months.

The 2018 QLED TV comes with "Ambient Mode" that lets users convert their devices into a canvas and also act as a window to the world.

"We are currently dominating the QLED TV segment in the country with 47 per cent share. We are looking to increase our share in this segment to 55 per cent by the end of September-October," Piyush Kunnapallil, General Manager, TV Business, Samsung India, told IANS on the slidelines of the launch.

The company is bringing eight QLED TV models to India -- ranging from 55-inch to 75-inch and covering flat as well as curved variants -- starting at Rs 2,45,000.

The 2018 QLED TV can mimic the pattern on the wall behind the TV to create an a visual effect in which the TV blends seamlessly into the wall.

The TV will also automatically show users the weather to reflect whether it is sunny or rainy.

The QLED TV has "Smart Things" app that can connect the device to other IoT-enabled devices for syncing and sharing content, sending notifications and mirroring screen and sound.

It has 100 per cent "Colour Volume" and HDR10+ functionality in a sleek and premium metal body with a nearly bezel-less display.

The company currently has 36 per cent market share in the UHD television and expects it to take to 45 per cent as it sees a change in consumer behaviour towards more premium products.

Samsung India is also looking to expand its UHD line-up from 10 to 16 models this year.

"Consumers in India are moving to bigger and better televisions. We intend to fuel this trend by increasing our UHD line-up by 60 per cent and launching new products with innovative features," said Kunnapallil.

The series comes in a slim-matte body and is powered by superior High Dynamic Range (HDR), "Dynamic Crystal Color" technology, "One Remote Control", "Smart Hub" and "Smart Convergence" for users to pair their smartphones with TV or TV with a Bluetooth speaker that lets them enjoy two-way audio streaming.

As part of its "Make for India" initiative, Samsung India launched the "Concert" series in two variations -- "Smart Concert" and "Joy Concert".

"Users are looking for loud volume and cinematic sound capability so they can enjoy movies, music and sports. The 2018 `Concert Series` has been designed to address this need with a new sound technology that combines both hardware and software improvements to deliver powerful cinematic surround audio experience," Kunnapallil told IANS.

The "Concert" series will come with four speakers -- two at the top and two at the bottom wherein each channel delivers 10W sound output to pack a punch of 40W surround-sound experience.

The "Concert" series also comes with Bluetooth capability which allows users to pair their smartphones or speakers to TV and also has a customisable advanced user interface (UI).

The "Smart Hub" feature in the "Smart Concert" variant allows users to access Live TV and browse content across apps such as Jio Cinema, Netflix, Amazon Prime and Big Flix.