The apex court had given them the time till today to deposit Rs 1500 crore, as during the previous hearing, Sahara Group had deposited Rs 790.18 crore and were to pay the balance of Rs 709.82 crore. 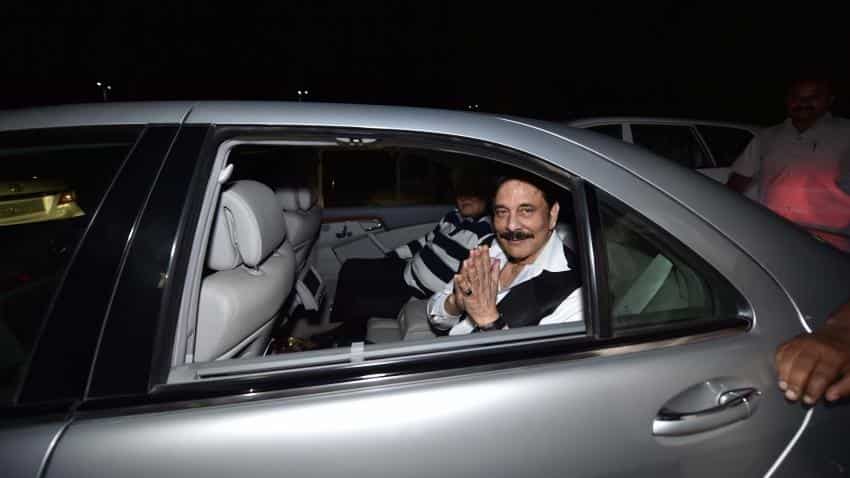 The Supreme Court today noted that the embattled Sahara Group was still short of Rs 9,000 crore of the principal amount of Rs 24,000 crore to be deposited in the SEBI-Sahara account to refund its investors.

The fact became clear after the apex court took on record that as per the committment given on June 19, the company and its chief Subrata Roy, who is out of jail to arrange the amount, have transferred Rs 1500.40 crore in the SEBI-Sahara account.

The apex court had given them the time till today to deposit Rs 1500 crore, as during the previous hearing, they had deposited Rs 790.18 crore and were to pay the balance of Rs 709.82 crore.

At the outset, a bench headed by Justice Dipak Misra was told that a sum of Rs 710.22 crore has been transferred to the SEBI-Sahara account.

Taking note of this, the bench said, "Thus, the total amount that has been received by the SEBI-Sahara account is Rs 1500.40 crores. Thus, the commitment given on June 19 as regards the first cheque stands satisfied".

It also took on record that a cheque amounting to Rs 552.21 crores, which is to be honoured on July 15, was also given to SEBI.

Senior advocates Kapil Sibal and Mukul Rohatgi, appearing for the Saharas, sought time till August 15 for realisation of the cheque and giving a road map for depositing the remaining amount. However, this was rejected by the bench which also comprised Justices Ranjan Gogoi and A K Sikri.

"At this juncture, we are obliged to sit in a time machine and recall what this court had stated on April 27, 2017. On that day, it was noted that a cheque amounting to Rs 552.21 crore had been deposited and it was to be honoured by July 15.

"SEBI is directed to produce the cheque in the concerned bank in the relevant account. If the cheque is dishonoured, appropriate consequences shall be faced by the contemnor," the bench said.

The court then fixed the matter for hearing July 20 while continuing with the relief granted to Roy who has been directed to remain present in the courtroom.

It declined the plea of Saharas that there should be a verification of crores of investors before the amount is encashed, saying the previous apex court order was clear that the amount has to be first deposited in the SEBI-Sahara account.

The bench also said it would be appropriate to accept the terms and conditions and the draft proclamation, prepared by Vinod Sharma, the official liquidator of the Bombay High Court, for the auction of Aamby valley and further steps for auction would be taken if the cheque is dishonoured.

The top court also noted the submission of SEBI that the Sahara property situated at Haridwar may require four more weeks to be auctioned as some portions are encumbered.

However, it said, "the auction shall take place in respect of the unencumbered part of the Haridwar property and the same shall be adjusted not towards the cheque amount but towards the balance amount".

The bench also clarified that though it has approved the terms and conditions and draft proclamation, it has not directed the auction of properties at Aamby valley today as the date of cheque is July 15 and if the cheque is honoured, "we shall direct for deposit of bigger amount so that the sum due, which is approximately Rs 9000 crore as on today, shall be expressly realised, for realisation of the money is the principal purpose of the present proceedings."

The court was earlier irked over non-submission of money and had decided to sell off Rs 34,000 crore worth of properties of the Sahara Group at the Aamby Valley.

Roy has spent almost two years in jail and been on parole since May 6 last year. The parole was granted the first time to enable him attend the funeral of his mother. It has been extended since then.

Besides Roy, two other directors -- Ravi Shankar Dubey and Ashok Roy Choudhary -- were arrested for the failure of the group's two companies -- Sahara India Real Estate Corporation and Sahara Housing Investment Corp Ltd -- to comply with the court's August 31, 2012 order to return Rs 24,000 crore to their investors. Director Vandana Bhargava was not taken into custody.