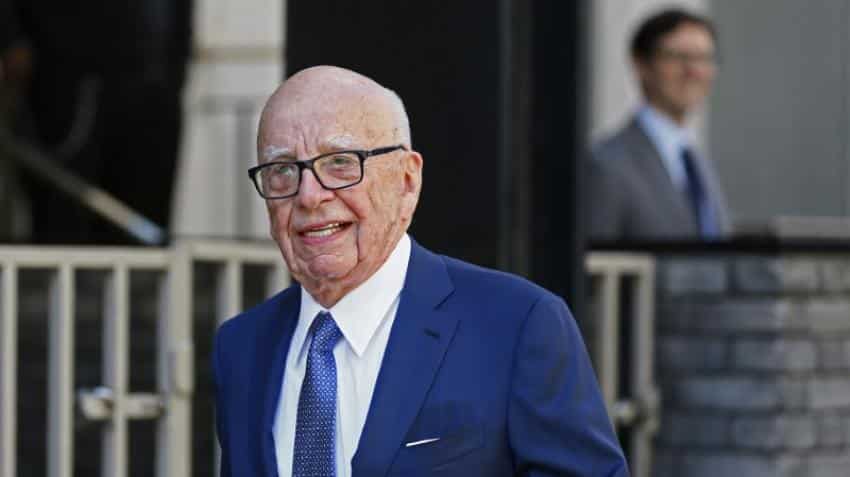 Rupert Murdoch`s Twenty-First Century Fox Inc has struck a preliminary deal to buy the 61% of British pay-TV firm Sky Plc it does not already own for around $14 billion, five years after a political scandal wrecked a previous bid.

The proposed offer of 10.75 pounds a share in cash, which is backed by Sky`s independent directors, would strengthen the position of James Murdoch - who is both chief executive of Fox and chairman of Sky - in his 85-year-old father`s media empire.

People familiar with the matter said Fox had pounced after Britain`s vote to leave the European Union (EU) in June sent the pound down about 14% against the US dollar and Sky`s share price tumbling.

Owning Sky would give Fox, whose cable networks include Fox News and FX, control of a pay-TV network spanning 22 million households in Britain, Ireland, Austria, Germany and Italy.

It would also be the latest deal to marry distribution with content after AT&T Inc announced an $85 billion bid to buy Time Warner Inc earlier this year. While Sky does produce some of its own content, including in news and sport, the deal would give Fox full ownership of a wider distribution platform in Europe.

"Fox has always seen its 39% stake in Sky as an unnatural state of being and has long been trying to buy full control," a person familiar with the deal said.

"Now it was the perfect moment. With the weak pound (and lower stock price), Sky has become 40% cheaper and the government is supportive of almost any investment in Britain."

Rupert Murdoch`s previous attempt to buy Sky through his News Corp business provoked uproar among some UK politicians, who said it would give the billionaire owner of The Sun and The Times newspapers too much control over the country`s media.

That bid collapsed in 2011 when Murdoch`s UK newspaper business was engulfed in a phone hacking scandal that intensified political opposition, resulted in a criminal trial and led to the closure of his News of the World tabloid.

Liberum analysts said Friday`s proposal was likely to have an easier ride, partly because News Corp has now separated from Fox, which means the bidding firm no longer owns UK newspapers, and because there are no competition issues.

They also said the British government was keen to promote investment in the wake of the Brexit vote and could present the deal as a sign of confidence in the economy.

Prime Minister Theresa May met Rupert Murdoch after a visit to the United Nations in September, according to media reports.

Fox said it would reinforce Britain`s standing as a top global hub for content generation and technological innovation.

Tom Watson, deputy leader of Britain`s opposition Labour Party and a key critic of the Murdochs during the 2011 scandal, called on regulators to be ready to properly vet the deal - but did not oppose it outright.

Fox`s proposed bid is a 36.2% premium to Sky`s closing share price on Thursday. It values the company at about 18.5 billion pounds ($23.2 billion) and the stake Fox does not already own at 11.25 billion pounds, according to Reuters calculations.

Martin Gilbert, a member of Sky’s board who will assess the bid as part of its independent committee, told Reuters the offer was a good premium worth presenting to shareholders.

Even so, analysts at Citi characterized the offer as a "low-ball bid," citing a fair value assessment of 13.50 pounds per share.

Before Friday`s surge, Sky`s shares had dropped 30% this year in part due to concerns of an UK economic slowdown caused by Brexit.

The deal has also been made more attractive for Fox by a drop in the value of sterling, which makes it cheaper for foreign firms to buy UK assets. British tech company ARM was snapped up by Japan`s SoftBank Group Corp in the days after the Brexit vote and shares in UK commercial broadcaster ITV Plc closed up 5% on Friday on speculation it could be next.

Long tipped as his father`s successor, James Murdoch`s reappointment as chairman of Sky earlier this year reignited speculation of another bid approach by Fox.

Britain`s takeover watchdog has set Fox a deadline of January 6 to make a firm bid or walk away. Sky said that "certain material offer terms" remained under discussion, and that there could be no certainty that an offer would be made by Fox.

The terms still under discussion include the size of the break-up fee, as well as some other contractual obligations of the two companies to close the deal, according to people familiar with the matter. These are not expected to present any major hurdle to agreeing a deal, the people added.