The Swadeshi Jagran Manch, which is the economic wing of the Sangh, claimed that Walmart is using e-commerce route to circumvent existing rules which bar foreign companies in multi-brand retail and dubbed its acquisition of Flipkart a "back-door entry" into Indian market. 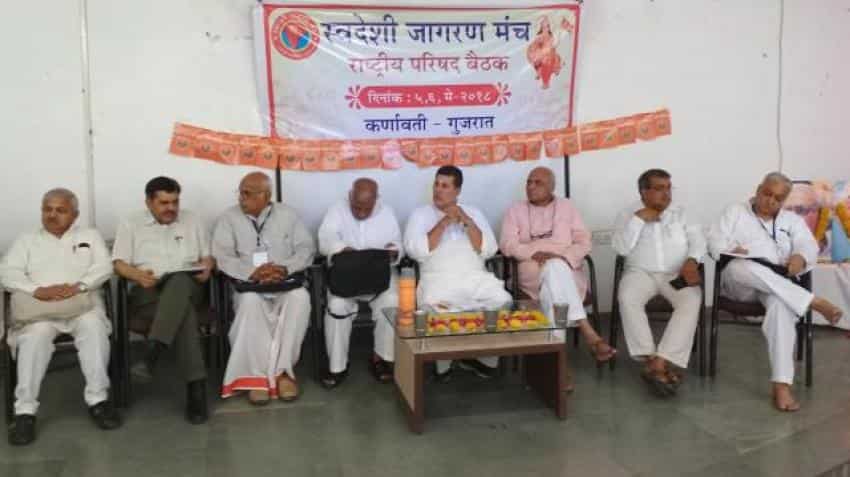 He alleged that there was a series of violations of law in allowing the deal to happen. Image source: Swadeshi Jagran Manch
Written By: PTI
RELATED NEWS

RSS affiliate Swadeshi Jagran Manch today alleged that US retail giant Walmart was "circumventing" rules for a "back-door entry" into India with its USD 16 billion majority stake acquisition of Flipkart and sought Prime Minister Narendra Modi's intervention to safeguard "national interest". The SJM's letter to the prime minister, asking him to ensure that interest of those at the bottom of the pyramid in retail and agriculture space are safeguarded, came on a day Walmart Inc acquired 77 per cent stake in Flipkart.

The Swadeshi Jagran Manch, which is the economic wing of the Sangh, claimed that Walmart is using e-commerce route to circumvent existing rules which bar foreign companies in multi-brand retail and dubbed its acquisition of Flipkart a "back-door entry" into Indian market.

"This will further eliminate the small and medium businesses, small shops, and opportunity to create more jobs. Most of these small entrepreneurs are already battling for their existence; entry of Walmart will further create problems for them," SJM's co-convenor Ashwani Mahajan said in his letter.

He also alleged that there was a series of violations of law in allowing the deal to happen.

"It will be very dangerous, if we allow them to raise funds, transfer assets, that too to a company like Walmart," Mahajan wrote to Modi. He also dispatched a copy of the letter to Commerce Minister Suresh Prabhu.

Sources said that Prabhu has assured the SJM that his ministry would look into the matter.

Mahajan said the stand taken by the SJM, the RSS and the BJP has been that foreign direct investment in multi-brand retail will kill entrepreneurship and is anti-farmers.

"Walmart is using the e-commerce route to circumvent the rules to attack Indian market. It is to be noted that nowhere in the world, Walmart has a market place model," he said in his letter.

The experience of other countries is that their domestic companies were sold out to bigger MNCs, and all over the world giants like Walmart and Cosco have taken over, the SJM co-convener said.

"This deal is unfortunate, but not surprising. Now the danger is knocking at our doors. These developments forced us to write this letter and and appraise you about various disruptions it will do to the market and violations of the law of the land, along with being unethical and against the national interests," Mahajan said.

Seeking the prime minister's intervention, he said Walmart is among the world's largest importers of Chinese goods and this will kill small and medium enterprises.

It will further kill the 'Make in India' dream too, he said, referring to Modi's ambitious manufacturing policy.

"We all know that they have interests in the multi-brand retail of food and a combination of both will kill the interests of farmers," he said.

Mahajan also alleged that Flipkart's operations are "not beyond suspicion" and that its group companies have not filed their statement of accounts for the year 2016-2017, 2015-2016 and have only made partial disclosures.

UGC NET result 2020: NTA declares result on ugcnet.nta.nic.in|here’s how to download it