The details of the projects associated with the announced Rs100 lakh crore infrastructure fund haven't been disclosed but it seems that highways and road projects will be a part of it, says MS Unnikrishnan, MD & CEO, Thermax Ltd. 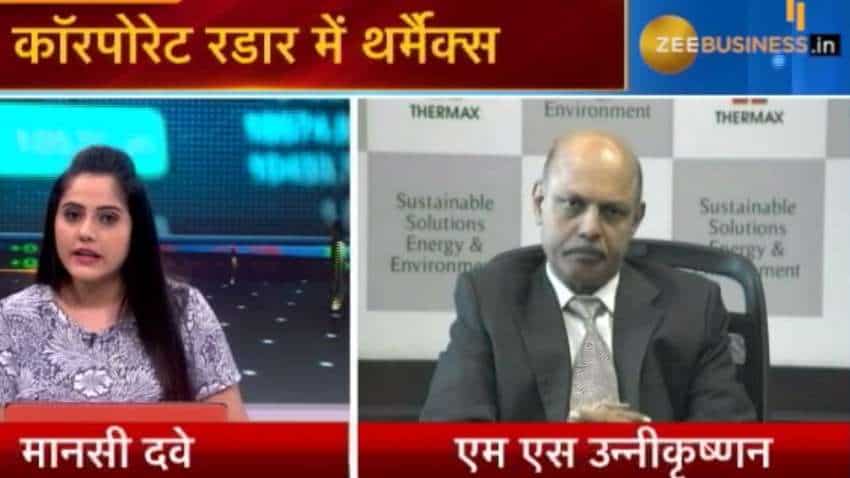 During an interview with Mansee Dave, Zee Business, Unnikrishnan said, "our international business grew by 45% in the last quarter.
Written By: Jitesh Kumar Jha
Edited By: Asit Manohar
RELATED NEWS

The details of the projects associated with the announced Rs100 lakh crore infrastructure fund haven't been disclosed but it seems that highways and road projects will be a part of it, says MS Unnikrishnan, MD & CEO, Thermax Ltd. During an interview with Mansee Dave, Zee Business, Unnikrishnan said, "our international business grew by 45% in the last quarter and it was a result of a big order worth Rs1,000 crore from African Continent ". Edited Excerpts:

The government has given us some indication about Rs100 lakh crore infrastructure spend roadmap. How viable is this and what kind of opportunity exists for your company?
It, the government, hasn't disclosed the details of this project. But, the areas likely to be covered under the plan includes express highways, highways, village roads, railways, defence, smart cities, ports and airports. The actual implementation of these projects will increase the demand for cement and steel, which would generate new capacities. But, it will only after the projects are announced, tenders are out and orders are awarded. Thus, the entire process may take 12-24 months time. Thus the demand for new capacities will come into picture only after the projects are implemented. However, people at their end can think for expansion of steel and cement production, as these are the directly benefitted areas. Besides, the investment plan of Rs100 lakh crore will have a trickle effect, which would increase the demand for several items like consumer goods, automobiles, FMCG goods and durables among others. It will also generate jobs, which will bring surplus money to people and increase the overall demand in the market. The project is not targeting any special segment/area but the entire economy.

CMIE data shows some uptick in private CapEx in the last quarter. What's your assessment of private CapEx spends?
Haven't seen the specific numbers of CMIE yet but have learnt that there was an increase in orders of the capital goods in December quarter. But our discussion on the same allowed us to know that EPC orders of two refineries, Barmer Refinery and Vishakhapatnam refinery, has been finalised. Apart from this, certain orders of railways and power have been cleared. However, great improvement is not visible on the private CapEx front. It may be visible in few areas but new orders have not been created in this quarter.

Any sectors where private CapEx may pick up? Do you think that the specialty chemical space is doing good and business opportunities are growing the case of gas desulfurization plants?
It would have happened in flue gas desulphurisation (FGD) segment as we have also bagged an Rs430 crore order in this quarter. Similar orders were also given to other companies. The process of placing orders for lot 1, 2 & 3 have been completed, while orders of lot4 & 5 haven't been placed yet. I believe the orders of lot 4 will be placed in next three-four months and lot 5 will be completed in the next six-twelve months. In total, the order of 18,000 MW will be placed and it will range between Rs10,000-15,000 crore. These orders will be placed in next 12-18 years.

Your international business has seen steady growth and stands close to 45% at present. Will this rise more in the future and is it your strategy to deal with the ongoing slowdown in the domestic market?
It's a strategy for sure but the last year's increased numbers are related to a big order worth more than Rs1,000 crore from Nigeria, the African continent, for a new refinery. Its revenue was recognised last year. I don't think that we will be able to maintain this 45% level but our international turnover will stand at an average of 35%. This will be supported by the work that we have done on the international front like in European subsidiary, Indonesian factory, and focused efforts in Africa, Middle-East and South-East Asia, however, the percentage may go up if there is any addition in the orders. But, it is true and we will have to depend upon the international market to cope with the losses incurred in the domestic market.

Update us on the current order book status of your company? Also, let us know the additional orders that are being targeted in 2020?
It is a silent period as the quarter has ended and we can't provide the numbers at present but can say that we may get new orders in this quarter. But, the slowdown will continue in the domestic market as no big projects will be announced in the recent future. Thus, we may face challenges in getting new orders and private CapEx will run at a normal level. Similarly, big orders are also not lying in the international market that will reach us. Investment has slowed even in the international market amid increasing competition. It, investment, is not a domestic issue but it is happening across the globe but I feel that both the markets, domestic and international, will pick up in the next fiscal year (FY2020-21). It will not happen in each and every segment but new orders of medium-sized projects and private CapEx can be seen. It will be beneficial for our order book as well.

What is your working capital situation and do you have any concerns related to it?
We haven't taken any loan but have facilities and that's why will not face issues related to working capital. However, Capital Goods industry is facing problems related to the retention of money of the executed projects at government-owned companies. It has piled a lot at their end. And, the industry will be in difficulty until the process of disbursement of payment becomes faster. So, the overall capital goods industry is facing payment problems at present and it can be eased only if the PSU and the government will loosen their purse.