Rajeev Mehrotra, Chairman & Managing Director, RITES Ltd., talks about operations, exports and revenue associated to it, order book and turnkey business among others during an exclusive interview with Swati Khandelwal, Zee Business 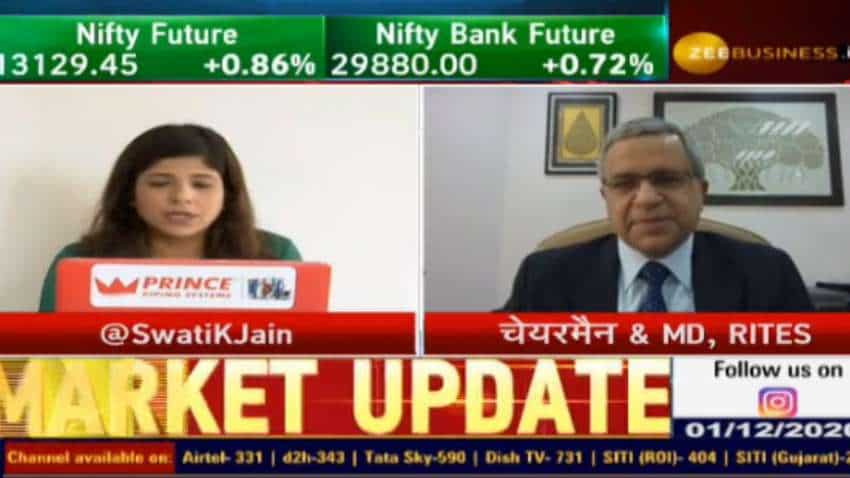 Q: Q2FY21 numbers were low than the expectations. Going forward, what is your outlook on the top line and bottom line? Operationally have you reached to pre-COVID levels?

A:  The company has had a focus on execution. In the second quarter (Q2FY21), we achieved a recovery/ increase of around 33% as compared to the first quarter (Q1FY21). We can attain normalcy of around 75-80% with the projects that we are handling at present. So, there is a lot of scopes to improve in Q3 and Q4. In this period, we had a focus on execution as well as on new orders and closed our order book at the highest level of Rs 6,661 crore on September 30, 2020. With this, I think, the company has an order book to work for the next two years. But the only challenge will remain is about how the environment remains, Can people travel and will safety permit so much that people would like to come and work on the fields. Things will depend on these factors. Looking at these factors, I think that this year too, as I have said earlier that we will close FY21 with moderate growth, so, the hope remains. We are going to get very good growth from exports this year in which we will make shipments worth around Rs 550-600 crore by March 2021. So, the spillover of the exports of Rs 823 crore will be there in FY22. So, I would say that the company has already created positivity for FY22 as well.

Q: You are expecting good revenue from exports. So, do you think that it is sustainable or can go up from these levels? What is your view on the market and what percentage of your business is related to export?

A: Normally, the exports have been in the range of 20-25%, which was good according to the position because the market has had a focus on broad gauge and few meter gauge markets. But, now, we have made a strategic decision to go to the new markets and we are going to Cape gauge market and will also try to bring products related to standard gauge. So, what has happened in the past will be repeated in future products, such guidance is not necessary. There is a scope to grow it, add diversity in the exports and the Railway Ministry is supporting the production units of RITES. I think exports can help RITES in repositioning itself in the coming time. Wherever we are working we have found that many countries are refocusing on railways whether it is urban mobility or long-distance mobility. So, there is optimism for the coming five-six years.

Q: You have talked about order book and said that there is an order book for the next two years. Can you please tell us the size of the order book and what addition is expected on a realistic basis? Also, will RITES participate in big projects like Bullet train and railway privatization?

A: The order book that we closed on September 30, 2020, stood at Rs 6,661 crore, which is providing good visibility for the next two years. In fact, there was an order inflow of around Rs 948 crore in the second quarter itself. And we expect that decisions of some big decision will be announced in the fourth quarter. At the same time, we will also try to find a very meaningful role in the high-speed segment as well because technically very advanced technology is coming to the country and RITES will reposition itself in it. We have also put tenders in metros, at least tenders of two big metros are on. So, I expect a scenario in which the consulting business will consolidate more in Q4.

Q: What can be the total value of tenders about which you are talking?

A: The large project can involve three to four consultants. It will involve around two and a half to 4% part of the project cost for design and PLP charges. So, it is a very big amount in itself. Thus, one consultant will not be able to do it. Possibly, three to four people can pull in the process.

Q: What about the Turnkey business?

A: We have received turnkey orders worth Rs 700 crore in the second quarter. On which the preparatory work, like approvals for design and contracts development among others, is going on. And, fortunately, we may get a ready start from Q1 in FY22 due to these projects because we can start their revenue realization and their conversion to revenue in Q1FY22.