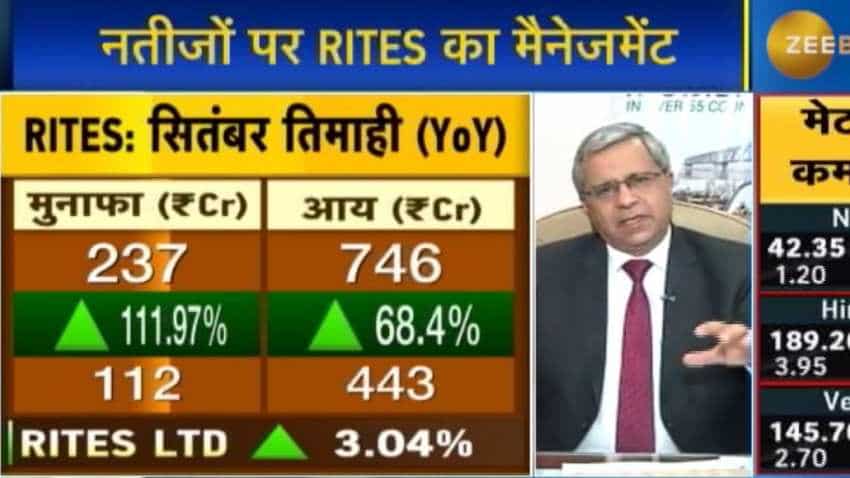 The major component other income stands at Rs 91 crore and it is related to a payment that was pending at the end of a foreign client, says Rajeev Mehrotra.
Written By: ZeeBiz WebTeam
Edited By: Jitesh Kumar Jha
RELATED NEWS

PAT has gone up significantly due to the rise in other income, which was at Rs107 crore. What were the other components of the other income?
The major component other income stands at Rs 91 crore and it is related to a payment that was pending at the end of a foreign client. The payment has been settled down and we have received our money with interests. Besides, key segments of the company have grown well and we managed our cost management in a way that we were able to maintain our margins at Profit Before Tax (PBT) and Profit After Tax (PAT) levels.

But there is a decline in EBITDA margins as it has come down from 33% to 26%. What led to this fall and what is your outlook on the same front for the next two quarters?
Our company has five businesses and they are consultancy, exports, locomotive leasing within India and abroad as well, turnkey contracts and power management. The consultancy segment has a contribution of 40-45% in our business and the remaining part is shared by the rest of the businesses. Each one of them has its own market, profile and margins composition, which is different in each case. So, if you don't look at the total margins then you will just reach a misguided interpretation through the percentage. Company's business had grown almost 80% and profit has doubled but if you feel that the margins are low then it would lead us to a misinterpretation. So, don't just go to the percentage but have a look on the five segments and each one of them has grown except consultancy, which has remained flat or subdued when compared to the previous quarter. But, their margins are different. For instance, if there is a growth in the exports then its margin is different from consultancy and leasing segments. This is why you can see a difference in the overall percentage but the actual number is more. It can be understood by looking into each of the five segments and total profit just don't go to the percentage.

What led to good numbers in the quarter and thrown light on the order book?
We have closed this quarter with an order book of Rs5,800 crore, which is enough for us to work for the next two and a half years. The sector's outlook is very good even in the case in India as the government has been increasing its CapEx on it and new types of projects are being introduced. Apart from this, we are also working in other countries - around 10 countries - and they have a special focus on railways and are placing orders for passenger coaches and new locomotives. Thus, our export segment giving good growth and its outlook on the order that is in pipeline is a positive one. Railways are being expanded in India as well as in other countries. Besides, our company also works in metros, airports and highways and any growth taking place in these segments is benefitting us.

So, should we assume that the next 3-4 years are going to be a good one for your segment and more orders are expected in the near future?
A lot of investment in infrastructure is being committed in the country over the next five years at present. And, we also work in the international markets. Summing up the two, it seems that there is good potential for reasonable growth. Besides consultancy, our company is diverse in nature and is into 4-5 more business segments and they are firmly and uniquely positioned and they will have a great share in the market growth in the next 4-5 years.

What is the export contribution in your order book and also provide the geographies that are supporting it?
The current order book outstanding after shipment is Rs860 crore. Sri Lanka is the major contributor to this order book and we have sent DMU train sets, which are self-propelled train sets has been sent to the country. Its popularity has made the country to place orders for 2 more train sets, which is separate from the 6 train sets that have reached there. Besides, few more countries have seen the trains that have been sent from India and are enquiring about it. In fact, one of such orders is at an advanced stage. This will help us in increasing our exports. Apart from this, we are also entering into the market of other gauges - apart from broad-gauge that is available in India, Sri Lanka and Bangladesh - like cape gauge in Africa or standard gauge. And, I think that in the next year we will be able to supply to that segment too.

Your consultancy revenue has fallen as few projects have not been able to reach the billing stage. By when do you expect that these projects will reach the billing stage?
Quarterly comparison is not enough to draw a conclusion in this business because the billing for consultancy for big projects is linked to the progress of the project. For instance, we have such a big project outside India and a part of its billing which is of Rs15 crore was made in the second quarter of the financial year 2019 and the remaining billing of the project will happen in the fourth quarter of this financial year. Thus, the progress in the gap of closing will be reached in a year but on comparing it on a quarter-to-quarter basis will look as if there is a dip in numbers. However, I do not see such concerns in the consultancy segment as we are sitting on a good order book and projects are being delivered on time.

Besides, prolonged monsoon in certain areas has created disturbances for about 1-1.5 months in performing the rail infrastructure work, as work on rail track connectivity went down or was closed due to water-logging. This delayed the billing stage associated with the project.

Thus Q2, the quarter of monsoon, is not a perfect season for comparison and reaches a conclusion. So, you should wait for Q3 and Q4.