SAIL Chairman Anil Kumar Chaudhary said that the last two months of the last financial year were very good for the company and in this period they produced 2.95 million tonnes. 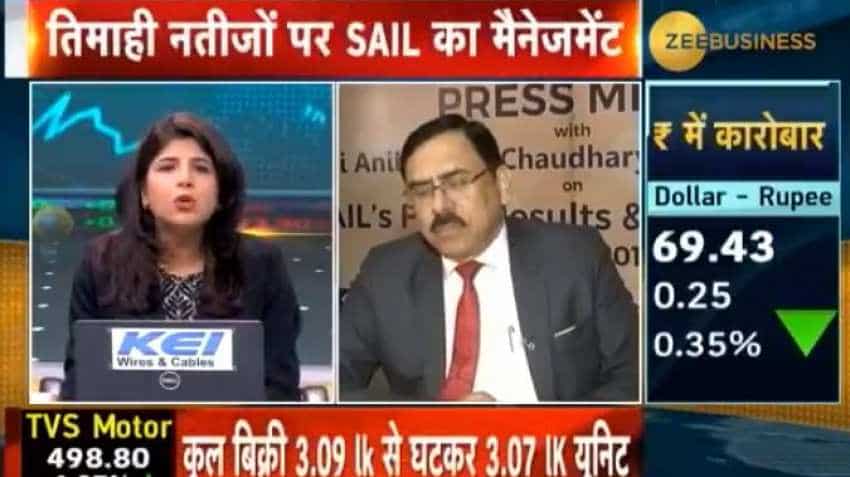 Anil Kumar Chaudhary of SAIL said that when production goes up then there comes improvement in techno-economic parameters.Image source: Zee Business

Public sector company SAIL posted a Rs 468.40 crore profit in the fourth quarter ended March 31, 2019, against a standalone net profit of Rs 815.57 crore in the corresponding quarter of the previous financial year. SAIL's standalone income increased to Rs 18,752.36 crore in the March quarter from Rs 17,264.86 crore in the year-ago period. The company managed to make a profit despite an increase in input material costs and fall in prices of final products.

"This performance was achieved by cutting cost and improving operational efficiency. Volume plays an important role in reducing costs. When the volume increases the fixed cost is divided into larger units and per tonne production cost goes down and we did exactly the same," he said.

He added that the last two months of the last financial year were very good for the company and in this period they produced 2.95 million tonnes. Chaudhary said that when production goes up then there comes improvement in techno-economic parameters." We could reduce the cost by Rs 2300 crore. There is an improvement in blast furnace productivity, CDI consumption, energy efficiency, and concast production," he said said.

"The company has given a target of Rs 3000-3500 crore cost reduction to its employees in the current financial year. In steel industry the more value edition you do more you have opportunity to earn. Value added products have multiplier effect on steel manufacturers' profit. If you do value addition of Rs 1,000 then the change in value will be about Rs 2,000 to Rs 2,500, and that means it has a multiplier effect of 1 to 1.5 times," the SAIL chairman said.