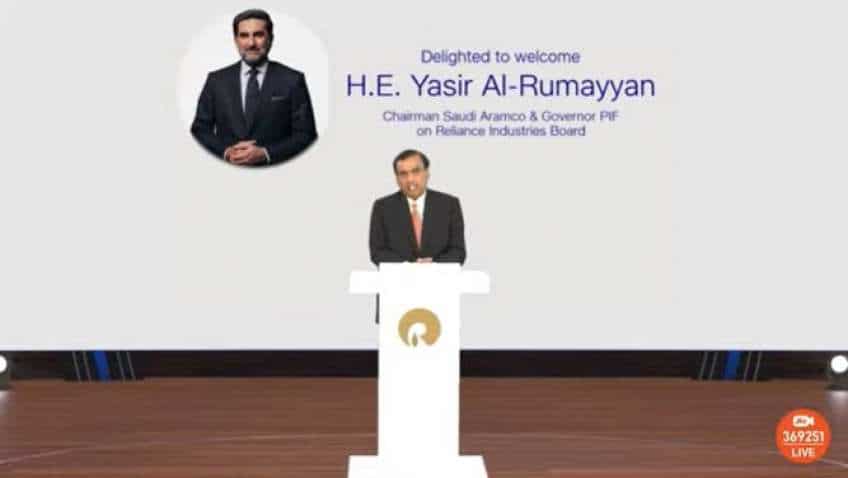 He made this confirmation during RIL's 44th AGM on Thursday. RIL chairman also said that the O2C deal with Saudi Aramco is expected to be finalised this year itself.
Reported By: ZeeBiz WebTeam
Written By: ZeeBiz WebTeam
Edited By: Prashant Singh
RELATED NEWS

"I expect our partnership to be formalised in an expeditious manner this year. Continued engagement between the both sides, even during this pandemic, is a testimony of strong relationship between Saudi Aramco and Reliance," Ambani said.

He also stressed that how Reliance was the only company to make profit in every quarter even during the peak of the pandemic. "Our O2C business faced unprecedented challenges by severe economic contraction at the beginning of year. Yet we were probably the only company globally that operated at near full capacity and was profitable in every quarter," added Ambani.

Talking about Business and financial performance of FY 2021-22, Ambani told shareholders that RIL's consolidated revenue stood at ₹540,000 crore and EBITDA at ₹98,000 crore, while almost 50 per cent of the EBITDA was contributed by consumer business.

Our consolidated net profit for the year was Rs 53,739 crore, higher by 34.8% compared to the previous year. "We continue to be India's largest exporter with Rs 1,45,143 crore, accounting for 6.8% of India's total merchandise export, to 107 countries," said RIL Chairman.

Meanwhile, Mukesh Ambani also announced the launch of JioPhone Next, fully featured smartphone co-developed by Google & Jio,  at RIL AGM 2021. The phone will be be available from September 10, 2021, on the occasion of Ganesh Chaturhti.