Reliance Jio has strategically introduced two plans that caps data at 1GB per day, for which most of its customers go flocking. We tell you which one to buy. 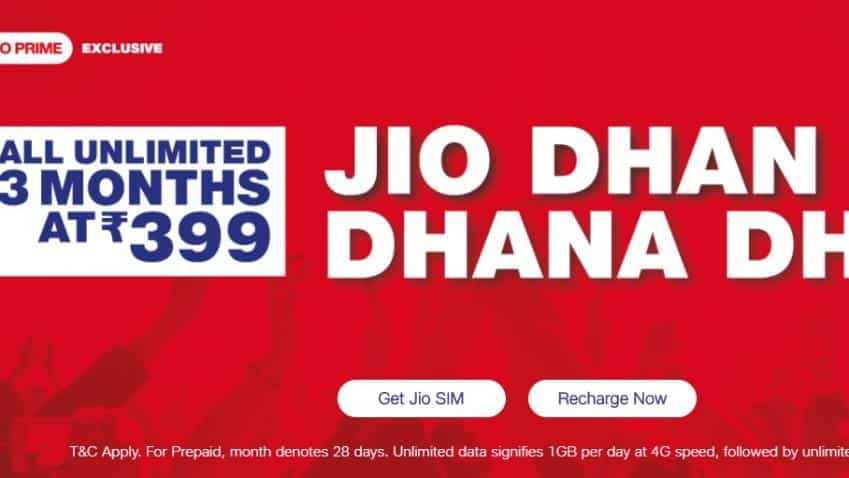 Although the company has a plethora of plans ranging from Rs 19 to Rs 9999 Jio has strategically introduced two such plans for its prepaid and postpaid subscribers that cap data usage to 1GB. Image Source: Company website
RELATED NEWS

Reliance Jio has finally come out with new offers for its 4G customers with Rs 309 and Rs 399 being major plans that the telecom major is pushing for. Which plan should you go for? We help you decide.

It was nearly a year ago that the Mukesh Ambani led company – Reliance Jio was giving away free services to its clientele much like a famous talk show host. Now in an attempt to win back some profits for the company it has introduced new plans which are nearly 30-50% more expensive on a monthly basis, a report by DNA said on Thursday.

In his speech on December 1 while announcing the company’s Happy New Year offer, Amabani said most of Jio users do not use data beyond 1 GB per day. “We have noticed that 80% of Jio users consume less than 1 GB of data daily.”

Although the company has a plethora of plans ranging from Rs 19 to Rs 9999 Jio has strategically introduced two such plans for its prepaid and postpaid subscribers that cap data usage to 1GB – the Rs 309 plan and the Rs 399 one.

Rs 309 plan: This plan offers 56 GB data for a period of 56 days to prepaid subscribers and has a fair usage policy (FUP) of 1GB/day at 4G speed.

Post the conclusion of 1 GB data consumption the company will reduce the speed under this plan to 128 Kbps.

Jio has already said that voice calling will always be free on its network and to that it has kept its promise as local, STD and roaming calls have been listed as free of cost. In addition customers can also send free SMSes on the Jio network.

The Rs 309 plan works out to nearly Rs 5 per day and Rs 154.5 per month (billing cycle for postpaid subscribers and 28 days for prepaid).

Rs 399 plan:  Under this plan prepaid subscribers are offered 84 GB data for a period of 84 days, which works out to 1 GB per day.

The FUP on the plan is also 1 GB per day post which speed will reduce to 128 Kbps.

While postpaid subscribers will get 90GB data at 4G speed for a period of three months.

Jio’s new plans replace the validity period of the earlier three months Dhan Dhana Dhan offer of Rs 309 and Rs 509. Though these plans are still available its validity period has been reduced to two months.

With the industry looking forward to the new plans of Jio, there is expected to be some sort of cease fire in the industry’s price competitive battle field.

“Although the plans continue to remain attractive for the subscribers, they directionally point to ARPU improvement. As ICRA anticipated earlier, the ARPU levels of the industry would have to improve to sustain the sizeable debt levels and improve return on investments. After amassing more than 100 million subscribers, RJio is now focusing on pushing up the ARPU to improve its profitability,” Harsh Jagnani, Sector Head and Vice President, Corporate Ratings, ICRA said.

Though the new plans may help bring up average revenue per user for Jio it is not entirely positive for the industry as the incumbent operators like Bharti Airtel, Idea and Vodafone are expected to dish out newer offers to fend off competition from Jio.