The commercial launch of Reliance Jio's home broadband services company JioFiber is likely to be in September or October this year, the report citing a source. 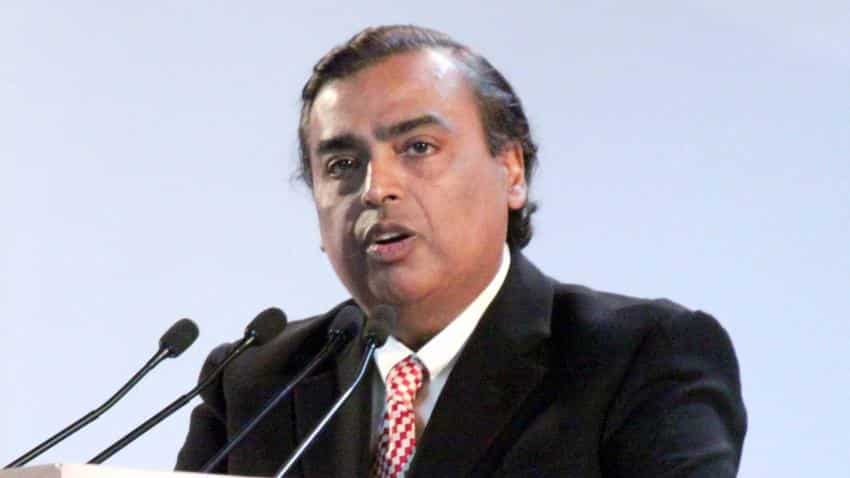 RIL chairman Mukesh Ambani had announced the company's plan to roll out FTTH service during the launch of Jio service in September last year and during the announcement of its Q4 results in April 2017. Image Source: IANS
Written By: ZeeBiz WebTeam
RELATED NEWS

1. The commercial launch of Reliance Jio's home broadband services company JioFiber is likely to be in September or October this year, the report citing a source

With the launch of JioFiber, Reliance Jio is planning to launch offers that will result in price war in home broadband market just like it did in mobile segment, the report said citing a person with knowledge of the plan.

According to the report, the base pack from JioFiber is likely to be 100 GB of data for Rs 500.

At present, the exisiting home broadband services companies offer about half that data at double the price.

The report citing the person on anonymity said that Reliance Jio has plans to expand its free trial offer of home broadband services JioFiber beyond the few cities where it is presently available.

This will culminate with the commercial launch of broadband services in September or October, this person added. The Diwali festival this year is scheduled on October 19.

The Reliance Jio did not respond to an e-mail from the newspaper seeking comment on the commercial launch date of JioFiber.

"Absolutely, it will be disruptive," the newspaper said quoting Rohan Dhamija, partner and head for India and South Asia at Analysys Mason, as saying while further terming the company's fibre-to-the-home technology to be superior to rivals' digital subscriber lines.

"To that regard, powered by larger capacity on the supply side as well as innovative pricing, it would look to disrupt the fixed broadband business similar to its disruption of the mobile business," Dhamija added.

Ambani had announced the company's plan to roll out Fiber-to-the-Home (FTTH) service when his company had officially launched the Jio service in September last year and during the announcement of the fourth quarter (Q4) results in April this year, Zeebiz reported earlier in May citing the NDTV report.

In fact, Reliance Jio's customer care team officially revealed the names of the cities in which JioFiber trials were being carried out earlier in May this year.

@baba420si Thanks for your interest. JioFiber Preview offer has currently being launched in select areas of Mumbai,(1/2)

@baba420si Delhi-NCR, Ahmedabad, Jamnagar, Surat & Vadodara. Our network is in the process of being rolled out to other cities - Delna(2/2)

According to Reliance Jio customer care team's reply to one Twitter user in May, the company has launched the JioFiber preview offer in select areas of Mumbai, Delhi-NCR, Ahmedabad, Jamnagar, Surat and Vadodara.

The Reliance Jio's customer care team in its tweet further said  that the company is in the process of launching JioFiber services to other cities too.