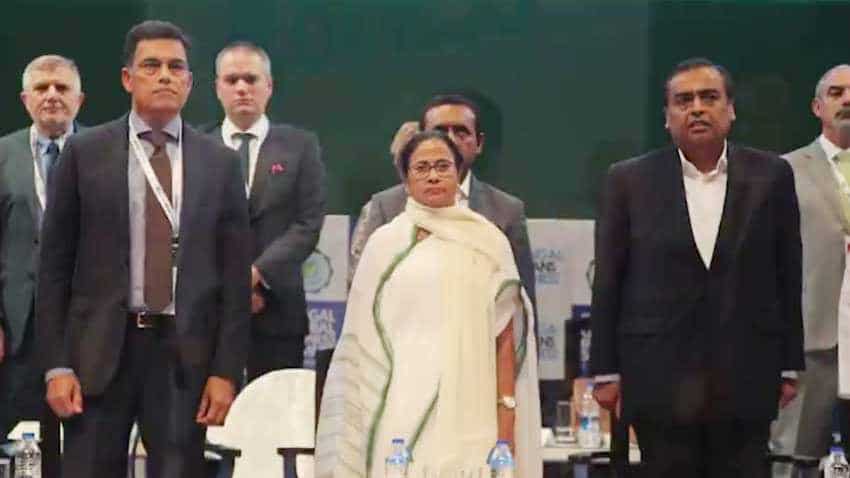 I am happy that Reliance currently provides direct and indirect employment to about 100,000 people in the state of West Bengal, said Mukesh Ambani.

Reliance Industries chairman Mukesh Ambani today expressed confidence that India can overtake China to become the world’s No. 1 economic power by 2047. Ambani made the comment during the opening session of Bengal Global Business Summit, being held in Kolkata. Ambani also praised West Bengal CM Mamata Banerjee for what he termed 'remarkable transformation' that the CM brought about in 'just one year'. He said that 'Bengal and its capital are not just leapfrogging; they are pole-vaulting to new heights of progress'. Read Mukesh Ambani's full speech here:

A very warm good morning to all of you.

I am happy to be back in Kolkata, truly the City of Joy.

It is now also the City of Hope.

Mamata Didi, what a remarkable transformation you have brought about in just one year.

Both Bengal and its capital are not just leapfrogging; they are pole-vaulting to new heights of progress.

Bengal was the birthplace of India’s renaissance.

It is now marching ahead to claim its rightful place in the nation’s progress once again.

I had mentioned in my speech at this summit last year that, “under your leadership, West Bengal is becoming Best Bengal”!

This is indeed coming true.

My warmest congratulations to you and your leadership in taking Bengal to greater heights.

It was less than Rs 4 lakh crores at the beginning of this decade, when you took reins of this state in your able hands.

The rate of growth of the state’s GDP is 9.1%, which is higher than the national figure.

West Bengal has gained a foothold in the group of the fastest-growing states in India with an all-round turnaround under your leadership.

Agriculture is booming, and farmers’ incomes are rising.

This state accounts for the highest rise in credit flow to micro, small and medium enterprise (MSME) sector among all Indian states.

This is good news for India for another important reason.

Bengal’s rise is leading to the rise of the whole of eastern India.

West Bengal, along with the other eastern states, will contribute a quarter of India’s GDP by 2035.

This impressive turnaround is because of the Honourable Chief Minister’s determined leadership and the dedication of her team of ministers and bureaucrats.

My warm congratulations to all of them.

I warmly welcome this transformation.

This augurs well for India’s inclusive and accelerated growth.

In 2019, India is all set to become the world’s fifth largest economy, overtaking the United Kingdom.

We are ahead of all countries except the United States, China, Japan and Germany.

In about a decade, India will become the third largest economy with a GDP of over USD 10 trillion – which is about four times the size of our economy today.

In two decades, India will become the second largest economy in the world.

And if we all work hard, I am confident that India can even overtake China to become the world’s No. 1 economic power by 2047, the year when we celebrate the centenary, a 100 years of our independence.

In this bright future, it should be our endeavour to ensure that no state, no region, no community and no citizen of India lags behind.

I have come here to assure you that Reliance will be the most trusted partner in the fulfilment of the dreams of nearly ten crore people of West Bengal.

The best way of fulfilling the dreams of Bengal and Bengalis is to embrace the revolutionary power of digital technologies.

Digital technology separates light from darkness, advancement from backwardness and excellence from mediocrity.

It is an investment that truly defines linkages to future progress.

There is no area of the economy, governance or life which is untouched by the revolutionary potential of digital technologies.

Every Indian can learn, work, buy, sell, find information and entertainment, access healthcare, and remain connected with near and dear ones.

India can solve the most complex problems of poverty, unemployment and underdevelopment.

This is the revolution that is beckoning India.

This is the revolution that is beckoning Bengal.

Bengal has always been a land of revolutionaries.

Now, the time has come for Bengal to become a land of digital revolutionaries.

Bengal was the cradle of industrialisation in India over a century ago.

Now the time has come for your state to become a leader to the Fourth Industrial Revolution.

To help rapid adoption of the technologies of the Fourth Industrial Revolution, Reliance Jio has rolled out a world-class infrastructure with bouquet of affordable services, in this state and all over India.

Permit me to mention here that what we have done so far in West Bengal, and all our commitments in the future.

First: In 2016, when I first attended the Bengal Global Business Summit, Reliance’s investments in the state were Rs 4,500 crores.

This accounts for about one-tenth of our total investments in India so far.

Jio has thus become the largest investor in the digital space in this state.

Now, we have firmed up our plan for a further investment of over Rs. 10,000 crores.

This plan is already under implementation.

Second: I am happy to announce that our endeavour to cover 100% of the state’s population with our Jio network is progressing at a fast pace.

We hope to achieve this within the current year 2019.

This will transform every home in Bengal into a SMART HOME.

Fifth, West Bengal is poised to become the logistics hub of the east, with plans to attract investments of Rs 5,000 crore by 2020.

This can create direct and indirect jobs for 50,000 people.

We at Reliance operate nearly 3 Million Square Feet of Warehouses in Bengal and with our New Commerce initiative, this will increase manifold in the next 24 months.

Jio and Reliance Retail will shortly launch a unique New Commerce platform, which will bring win-win benefits to consumers, retailers and producers.

Across the country, this platform will enrich and empower as many as 3 crore small shopkeepers.

Sixth: For Jio, digital rejuvenation of rural markets is a priority. Jio has close to 1 lakh active Business Partners across Bengal. Now, in yet another unique initiative, we have set up “Jio Points” as a direct distribution channel in deep rural markets, to cater to the growing rural market and each and every village in West Bengal.

With these Jio Points, we will have brick and mortar presence in every tehsil of the state to serve every single village.

As we speak today, 350 Jio Points are already operational and we will target a 1000 by the end of the year.

Seventh: I thank the State Government for allotting land for our state-of-the-art Data Centre project in Kolkata.

I assure you that we will implement this project speedily and make it as good as the ones in Silicon Valley.

Eighth, last year I had announced the establishment of the “Satyendra Nath Bose Chair Professor” in the Department of Physics at the University of Calcutta.

I am delighted to inform you that the Government of West Bengal has approved our proposal and we are setting up this Chair this year.

I am happy that Reliance currently provides direct and indirect employment to about 100,000 people in the state of West Bengal.

Whenever I come here, I feel that Bengal is a State with a Soul. It embraces everybody and when one leaves it, the State too leaves you with a bit of Bengal and Kolkata in your heart and a sense of satisfaction and a refreshed feeling in your mind.

Under your leadership Didi, Bengal today has certainly emerged as a “Sweet Bengal” and the “Land of Rising Glory”.

Permit me to sum up my remarks with this heartfelt pledge to you and the people of West Bengal:

The deepening and broadening of relationship between Bengal and Reliance will continue for years to come.

Reliance’s commitment to be an unflinching partner in your dream of a Shonar Bangla is unassailable.

On consolidated basis, SBI pips other index heavyweights to become most profitable company in Q2 so far