RCom launches a new plan for Independence Day. We tell you all about it. 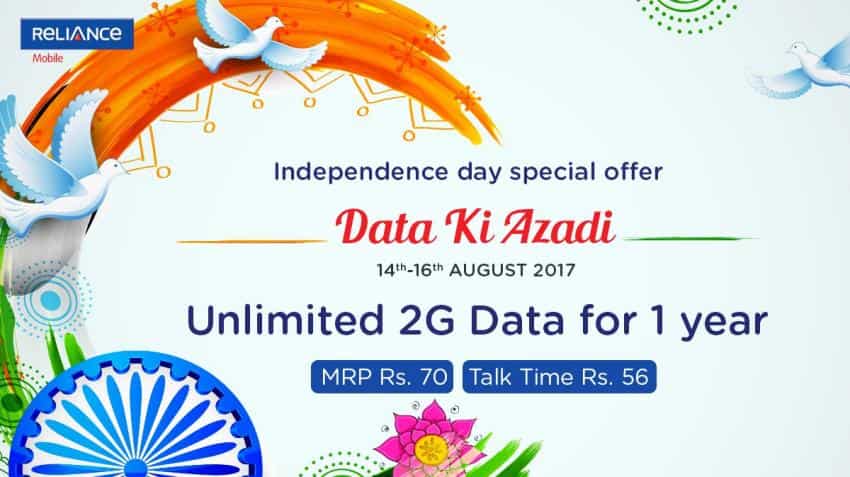 The company has been trying to woo subscribers with many new offers in order to keep up with the competition with Jio. Image Source: Reliance Communications official Twitter handle
Written By: ZeeBiz WebTeam
RELATED NEWS

This scheme will be available for subscription for just two days from August 14 to August 16, the company said and will provide unlimited 2G data and talk time of Rs 56 for a year.

“Freedom to express the joy of sharing with Reliance’s Data Ki Azadi at Rs.70 unlimited 2G Data for 1 year,” the company said.

However in the fine print the company has specified that GSM SIM card holders will get only 1GB of 2G data per day for one year and LTE SIM owners will get 1GB 2G data per month for the year.

The company has been trying to woo subscribers with many new offers in order to keep up with the competition with Jio. On Friday the company released another offer of Rs 299 which would give customers unlimited texts, calls and data.

RCom has been suffering under a huge amount of debt. It posted its third straight quarterly loss on Saturday which stood at Rs 1221 crore, a report by Reuters said.

The company has lost more subscribers in the month of June as per TRAI data. It’s net additions to the company’s wireless subscriber base fell by 1,009,327 in June.