Reliance Communications is offering 1GB data and unlimited calls to any network in the country at Rs 349. 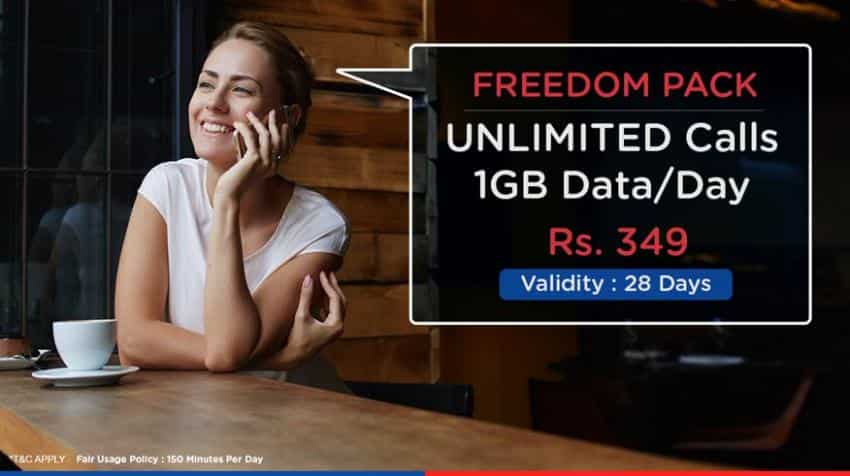 A total of 28GB with 1GB FUP per day will also be given to subscribers at the cost of Rs 349 for 28 days. Image Source: RCom official Twitter Handle
Written By: ZeeBiz WebTeam
RELATED NEWS

In another attempt to lure customers toward its network, Reliance Communications on Thursday tweeted out another tariff plan. This comes a day after Airtel's Rs 399 plan offering 84GB hit the news.

“Switch to Reliance with Rs 349 pack and make unlimited calls to any network, anywhere in the country,” RCom said.

Under the 'Freedom Pack' which was introduced in July, customers will get 'unlimited' calls, the company said. However under its Fair Usage Policy the company is offering only 150 minutes calling per day.

On the occasion of Independence day RCom had opened up a two-day window to subscribe to its ‘Data Ki Azadi’ offer. The plan offered subscribers 2G data for 1 year at Rs 70 and talk time of Rs 56.

Last week the company had rolled out another plan of Rs 299, which the company said was ‘cheaper than a pair of shoes.’ The plan offered customers unlimited texts, calls, data at Rs 299.

Earlier in August, Reliance Communications had launched a ‘Rozana’ offer.

The offer gave subscribers 1GB data per day and 30 minutes of unlimited calling to any network for a recharge of Rs 193 which was valid for 28 days. In July the same plan was offering 1GB 4G data and one hour of calling for Rs 33 with a validity of two days.

Other tariff plans for Reliance Communications subscriber include 1GB data per day at Rs 147 under its ‘Get-Net’ pack.

To keep up with the competition from Reliance Jio other telecom operators have rolled out offers on 4G data. Airtel is offering prepaid customers 84GB data for Rs 399.

Vodafone and Idea had also rolled out their 84GB packs earlier in July.